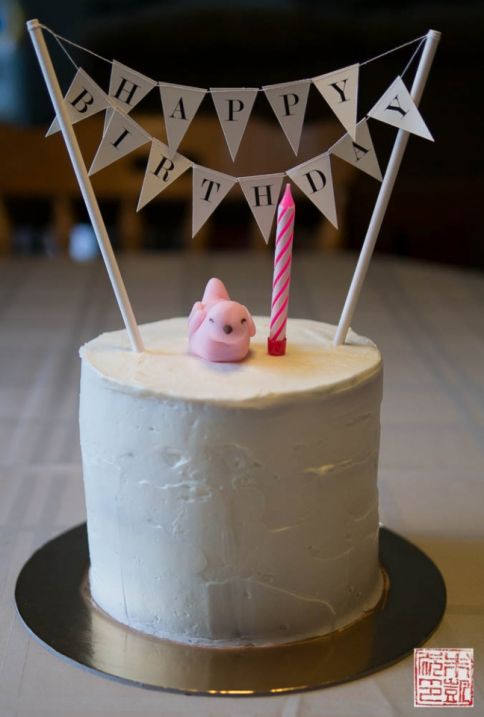 A couple weeks ago Isabelle turned one year old. One! How did my inaugural year as a mom pass so quickly!

I meant to post another update in between her six month milestone and now, but I guess a mega-ish update will have to do. Hopefully these periodic updates are still enjoyable! 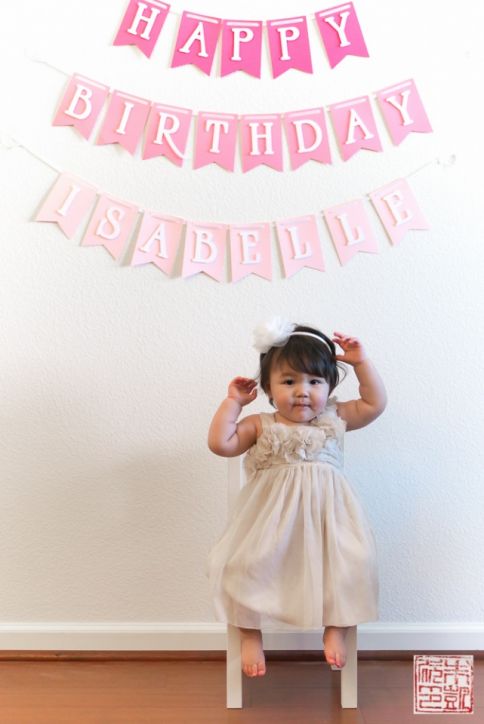 I keep a separate, private baby journal I try to update daily– although it might sound very dedicated, it really came about because I realized I literally could not remember things anymore. When I was younger I used to pride myself on having a pretty good memory – I was the person who remembered everyone’s birthdays, never forgot when a bill was due, and could recall conversations from years past.

There must be something about devoting your whole self to a new little being that causes all your memory circuits to evaporate, or else my brain is just starting to crumble under years of use. Anyway, what I mean to say is that I started my baby diary not because I was trying to be a super mom, but because I really was afraid I would forget all of Isabelle’s developments over her first year. Already if you ask me when she started crawling, or when she started recognizing Snickers, I couldn’t tell you right away. What about photos, videos, etc? Well, yes, I’ve got all that too – several full hard drives’ worth. But just like when I started Dessert First so long ago, I find words are still an indispensible creative medium for me. The act of writing, of rendering into sentences my thoughts and emotions as Isabelle took her first steps, or saw her first Christmas tree, or ate her first solid food – well, I’m glad all the blogging kept up my appetite for writing.  That diary plus all those photos and videos are my personal Isabelle timeline that I visit daily. 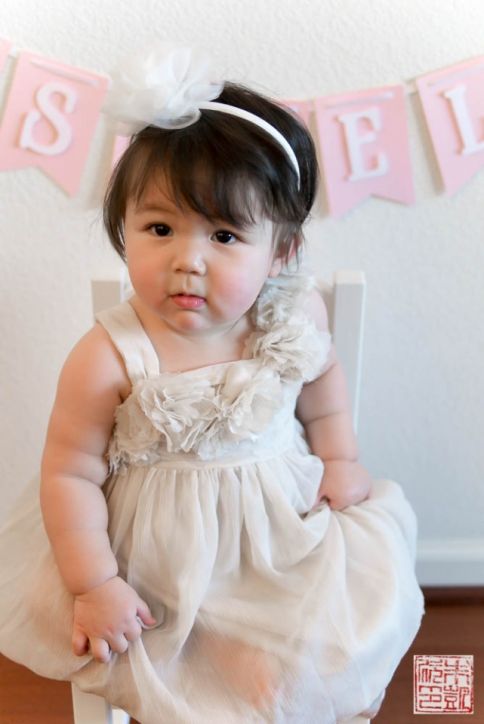 So I’ve noticed while going back over the year that babies definitely progress in spurts. There would be a long stretch of entries where I’d describe fairly routine days of eat-play-nap-rinse-and-repeat, and then suddenly a burst of entries where every day she was picking up something new, from saying “dog” to learning how to open doors to pointing at things she wanted . I’d scroll through photos, looking at her smiling face, and suddenly hit one where I would think, “wow, she looks so much older now. But she looked so babyish still in the photos from yesterday!”

It’s hard, sometimes (all the time?) seeing Isabelle the baby disappear into Isabelle the toddler. She hardly ever sits still in my lap anymore. She is obsessed with all the grownup toys like my kitchen gadgets and my camera (another reason why properly focused photos of her smiling directly at me are in short supply lately). She has definite opinions now (she can’t say no yet, but she knows how to shake her head for no – how’d she figure that out?).

But she’s fun. And she’s more fun every day. She makes up little games with her toys now. She continues to be a great sleeper, and has taken to solid foods like a star (it’s hard to believe she started out at 6 pounds, barely 10 percentile, and is now a sturdy 22 pounds, nearly quadruple her birth weight!) She is wonderfully sweet-natured and friendly to most everyone (I know I’m entering Bragging Mom mode, but in all honesty I just feel very lucky that I have such a gregarious baby). Her baby babble is pretty much the best ever. I will be so sad when she stops babbling and starts talking, but at the same time I can tell she’s on the cusp of figuring out how to communicate with us, and it’s a thrill every time she points at something or makes a sound and I think, I know what you’re trying to tell me! 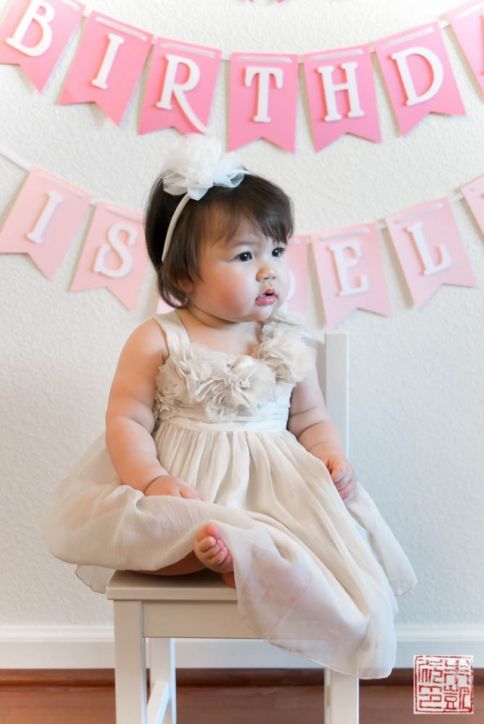 So Baby Year One has gone by in a flash and a twinkling, and I can say I feel very fortunate to have had a pretty good time of it (I say all unknowing as she enters the Toddler Years). I haven’t quite figured out the time management thing yet – there are still days where I haven’t crossed one item off my to-do list – but they’re outweighed by the deep contentment I feel at watching Isabelle grow and knowing I’d rather miss out on anything else rather than miss out on this.

By happy timing Isabelle’s birthday came right before my parents arrived from Hong Kong for a visit, and shortly before Chinese New Year. Therefore we rolled her birthday, a family reunion, and Chinese New Year dinner into one big weekend celebration. Since I was just coming off of finishing my book manuscript, I was relieved to not have to plan an elaborate birthday party just yet and all I had to provide was the birthday cake! 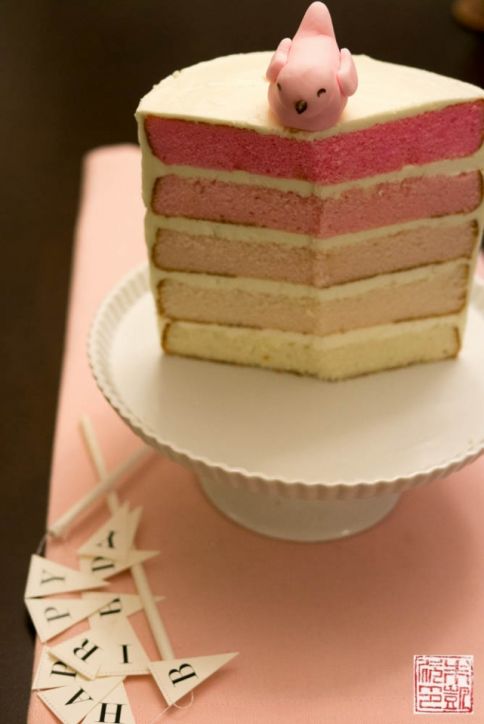 Let me note that I don’t know what Isabelle’s favorite color is yet. For a short time we thought it might be green, but she’s back to no preference. So my choice of a pink birthday cake is entirely based on the fact that I like pink. And better than a pink cake is a fanciful, five-layer pink ombre cake. Oh, second note: these cake photos are not quite up to my usual standards, as a Chinese New Year party at my parents’ house wasn’t the ideal set up for food photography. At least enough of the cake survived to take some interior photos!

While I have my go-to white cake recipe I’ve used for ages, I thought it would be nice to change things up a bit and get out of my rut. I chose to adapt King Arthur Flour’s Tender White Cake recipe, which uses the two-step, or reverse creaming method.

There’s plenty of fantastic information in professional cookbooks and on the internet about the traditional creaming vs two stage method for making cakes, but to quickly summarize: the two stage method involves mixing the dry ingredients together first, and then adding the fat (butter) and liquid ingredients – thus the “reverse creaming” moniker. This method was originally devised for use in high-ratio cake recipes – meaning cakes where the amount of sugar equaled or even exceeded the amount of flour.  These cakes were moist, firm, yet delicate. Many of the cakes you might see or buy in commercial bakeries could be high-ratio cakes, as the method was also originally meant to be used with specially formulated flours that were very fine and specially emulsified shortenings that would incorporate with the flour, resulting in a very fine, smooth texture. Pastry queen Rose Levy Barenbaum successfully adapted the high-ratio formula for use with butter, and created several two-stage method cake recipes specifically for home bakers in her Cake Bible. Now it’s a fairly well known alternative technique for mixing cake batter, whether at home or in the professional kitchen.

The reason I decided to go with a high-ratio cake and the two-stage method is while normally we like our cakes tall and fluffy, I wanted some more compact layers for making a five layer cake. I traded height for extra tenderness, and this cake was indeed delightfully tender, with a very fine, velvety crumb that cuts smoothly and displays beautifully. Ideal for creating a multi-layer cake! I also twiddled with the proportions a bit to get enough batter to fill five 6″ round cake pans. This is a pretty big cake; with five layers and the intense richness of the high-ratio cake, you won’t need more than a small slice to satisfy, so a 6″ round cake is plenty to feed a dozen people or more – plus it just looks more elegant.

There are some cautions about using the two-stage method, but once you understand some of the science behind the method it’s fairly foolproof.

Another reason I liked using the recipe for making an ombre cake is that you have to keep adding more coloring to the batter for each successive cake layer. I didn’t like the idea of having to keep stirring a traditional white cake batter, leavened with whipped egg whites, slowly deflating the whites more with each stir. With this recipe, there’s no such fear, so I can stir away and get the food coloring nice and incorporated.
Since there was a lot riding on this cake I did a test cake a week before. I loved the high-ratio cake recipe but the layers ended up a little too neon-fuschia pink at the end, so I went with a lighter hand for the final version.

As high-ratio cakes can contain more sugar than regular cakes, this cake is sweet, although not unpleasantly so. Of course, my sweet tooth has a very high threshold, but both my parents, who generally avoid sugary cakes and sweets, liked this cake. I stuck to a basic swiss meringue buttercream with a bit of almond and vanilla extract added in to give it depth. Although there are some gorgeous ombre frosting designs out there, I deliberately kept it simple since my family isn’t a big fan of excessive frosting. Instead, I made a little fondant bird for the top – Isabelle’s room is decorated with the Penelope line from Pottery Barn Kids and I love the little pink birds.

Isabelle might have gotten a tiny taste and I think she’s shown she has a budding sweet tooth! Looking forward to all the future birthday cakes I’ll make for her. Happy 1st birthday, Isabelle! 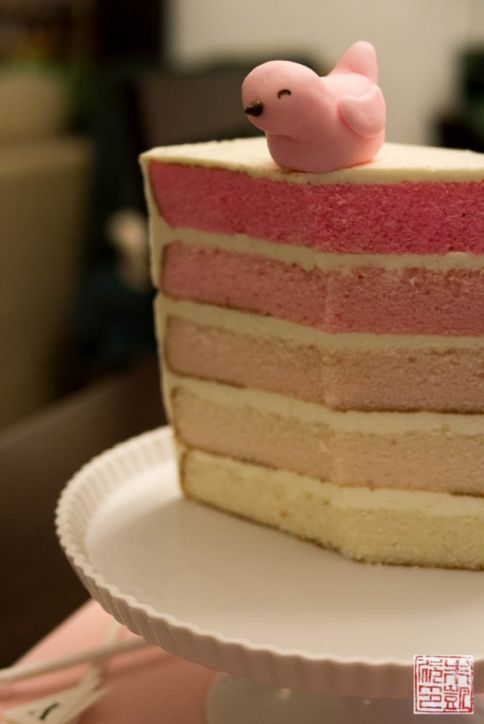