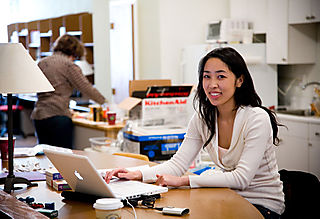 At work on the photoshoot for my book, Field Guide to Cookies. Photo courtesy of Steve Legato.

I am available for freelance work as a food writer, stylist, and photographer. Please contact me at anita [at] dessertfirstgirl [dot] com.

Two articles on Charles Chocolates and Bittersweet Chocolate Cafe in The Chocolate Guide, published by TCB Cafe Publishing in December 2007.

Field Guide to Candy in the Chicago Tribune, October 21, 2009

Awards and Other Mentions:

Photo shoot for private client, May 2008.

First place overall, Does My Blog Look Good in This, October 2007