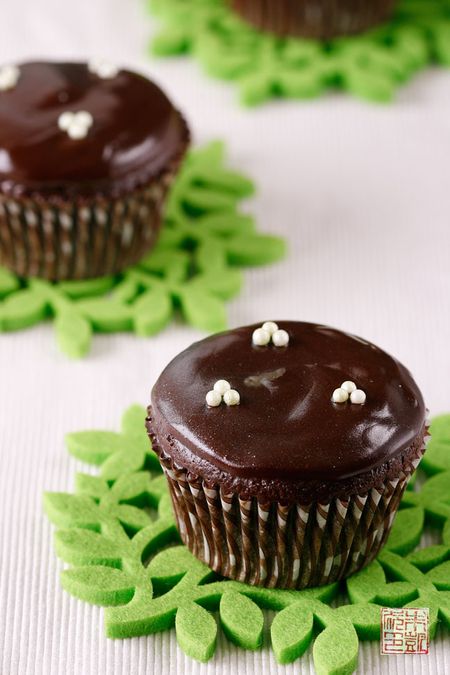 Pardon the slightly disjointed nature of this post; it was meant to be report on my TCHO factory experience that evolved into a St. Patrick’s Day recipe that now includes a mention of Japan. 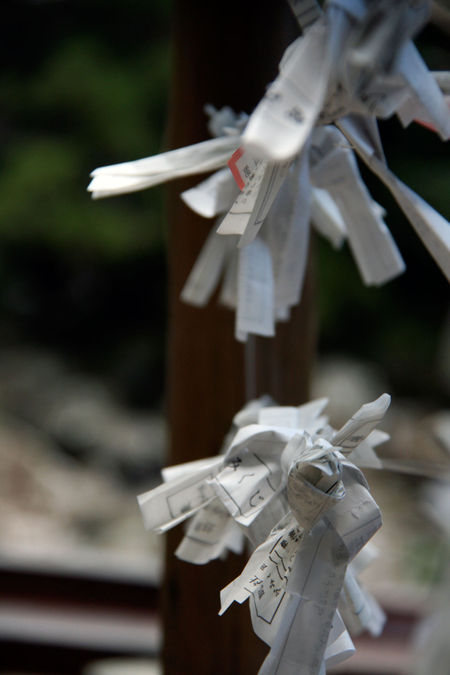 Apologies, but I couldn’t not mention that I fell in love with Japan long before I visited it for the first time, and I love it more with every subsequent visit. Their refined aesthetic that is visible is everything from their bridge design to their bento packaging; their concepts of wabi-sabi and mono no aware that appeals to my introvert’s, observer personality; the spare beauty of the countryside (captured in one of my favorite movies ever, Totoro), gives Japan a special place in my heart. It was hard to think about regular life, much less blogging, when seeing the awful images of devastation everywhere.

I wanted to pass along the word that food bloggers are already mobilizing to help out; local bay area chef Samin Nostrat is organizing a bake sale for Japan; check out her site to get involved. Or, for those of you not in the bay area, Sabrina of The Tomato Tart is holding a virtual bake sale. Do consider helping out and be a part of this wonderful, caring community of food bloggers. Thank you!

Now, back to the original subject of this post. A few weeks ago I got the chance to visit the TCHO chocolate factory at Pier 17 in San Francisco. TCHO is a bean-to-bar chocolate company; they work directly with farmers from Madagascar, Peru, and Ghana to grow cacao to their specifications. The roasted beans are shipped to San Francisco where they are turned into chocolate in the Pier 17 factory. With the closing of the Scharffen Berger factory in Berkeley, TCHO is the only place near San Francisco to get a glimpse of the chocolate making process. TCHO started offering tours of their factory at the end of last year; they are free and you simply sign up on their site and show up for an hour long tour that includes a brief overview of the chocolate making process and a chocolate tasting.

Larry Del Santo, the marketing manager, described TCHO to me as “geared towards the millenial generation.” With its high tech background and fast-moving startup feel, TCHO does fit in perfectly with the future savvy, iPhone-loving Bay Area set. As a lover of food history, I was delighted to learn that the swirling, geometric patterns are based on the anti-counterfeit patterns used on money; quite apropos since cacao beans were once used as currency. 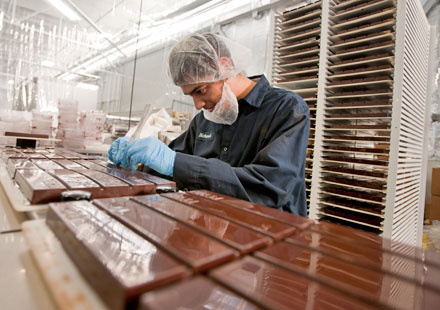 Although they don’t allow the public to take pictures of the factory, you can get a glimpse with this video on The Feast. 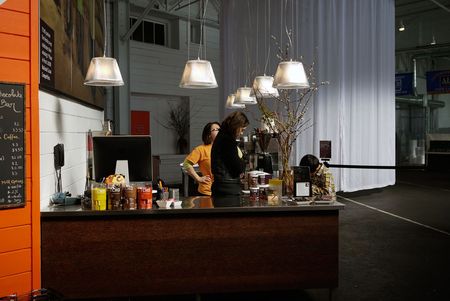 The retail counter at the factory, where you can also get a coffee or TCHO’s own drinking chocolate. 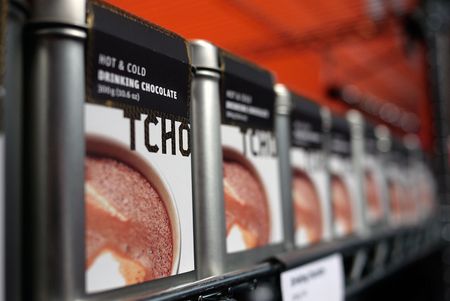 I really liked the chocolate; it is pretty much straight melted chocolate, gloriously thick, clearly harkening back to the xocolatl of the ancient Aztecs rather than the insipid watery pretenders found today. 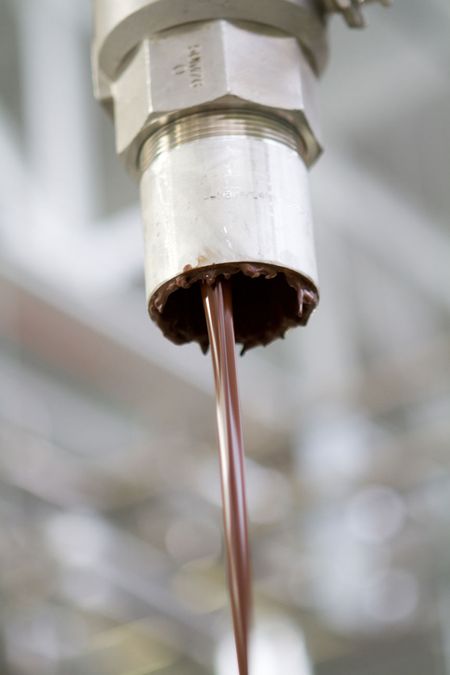 Willy Wonka’s chocolate factory in reality: pipes gushing liquid chocolate. When asked how the pipes were cleaned, the tour guide replied that they were flushed with warm cocoa butter. These must be the only pipes you would want to lick! 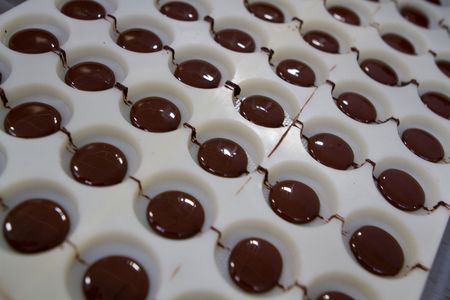 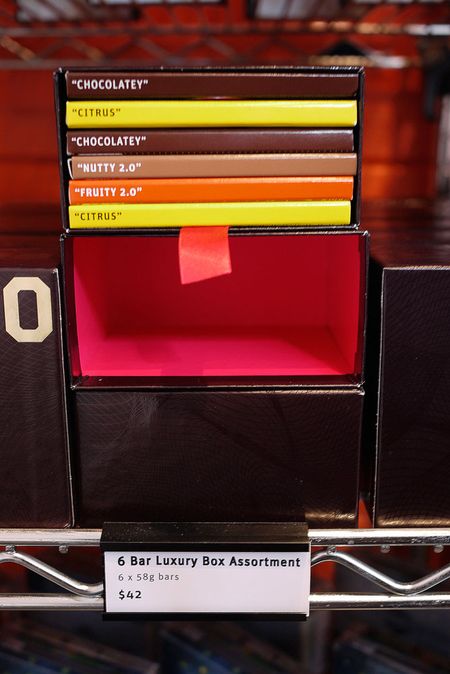 TCHO uses a “flavor wheel” to describe its various chocolate bars. There are six flavors on the wheel and currently four of them are offered: nutty, chocolatey, fruity, and citrus. TCHO takes pains to note there are no add-ins to their chocolate; all the flavor comes directly from the beans. Tasting all four of the bars is a quick and simple way to learn about some of the most basic flavor notes in chocolate. Unlike other artisan bars which may have a combination of notes, if you eat a “Nutty” bar you will clearly taste a nutty, toasted flavor. My favorites of the four were the Nutty and Fruity, which again contains no actual fruit but boasts a bright, clean berry flavor. The flavors are constantly being refined, which is why there is a “Fruity 2.0” and “Nutty 2.0”. TCHO is still working on the earthy and floral bars – the R&D process includes the now-famous “beta bars” which are sent to volunteers to taste and critique, a clever strategy that not surprisingly has gone over like gangbusters in this town of foodies. 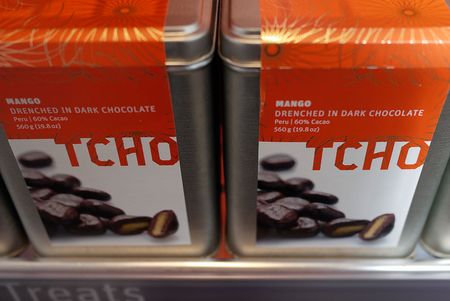 TCHO is also branching out into simple confectionery items such as these chocolate covered mango pieces. They have also started creating their own private label bars for Starbucks, which means in the very near future TCHO could be a household name. 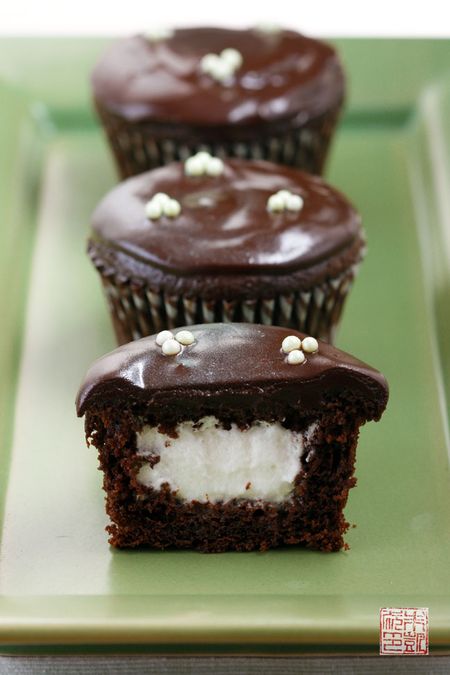 TCHO also has a professional line of baking bars and drops that come in a variety of percentages. I was gifted with a couple bags of the 68% Baking Drops as I was leaving, so I’d been waiting for a chance to try them out. Since St. Patrick’s Day was coming up, I wanted to do my spin on a chocolate mint cupcake. Something a little more elegant than the neon green frosted sugar bombs littering the bakeries. (Although I did think later that St. Patrick’s Day isn’t really a holiday associated with modest restraint, is it? Oh well.)

I came up with a chocolate sour cream cupcake (sour cream or creme fraiche are my favorites for a super rich cake) with a peppermint cream filling (if you really want, you can tint this green). A chocolate buttercream morphed into a chocolate ganache frosting, and the end result is sort of a cross between peppermint pattie and a Hostess cupcake. The sugar ball trios on top are a very light pastel green – surprisingly, no shamrock green available! I put a lucky group of four on one for someone to enjoy on St. Patrick’s Day. I also realized a little too late that luster dust on chocolate just makes it look grainy in photos-argh!

The TCHO baking drops performed beautifully and lent the cupcakes a robust, fudgey taste. Because I’m a geek, I’m really curious to do a comparison with some of the other baking chocolates on the market – look for this post in the near future! However, for now I can conclude that TCHO is a perfectly excellent addition to any baker’s arsenal. 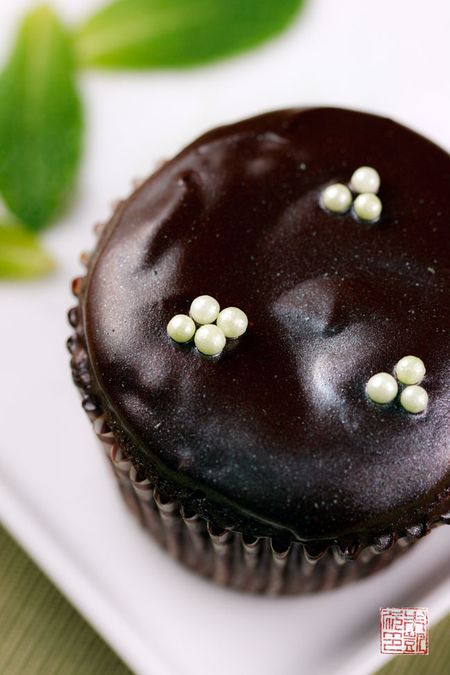 For the mint cream: