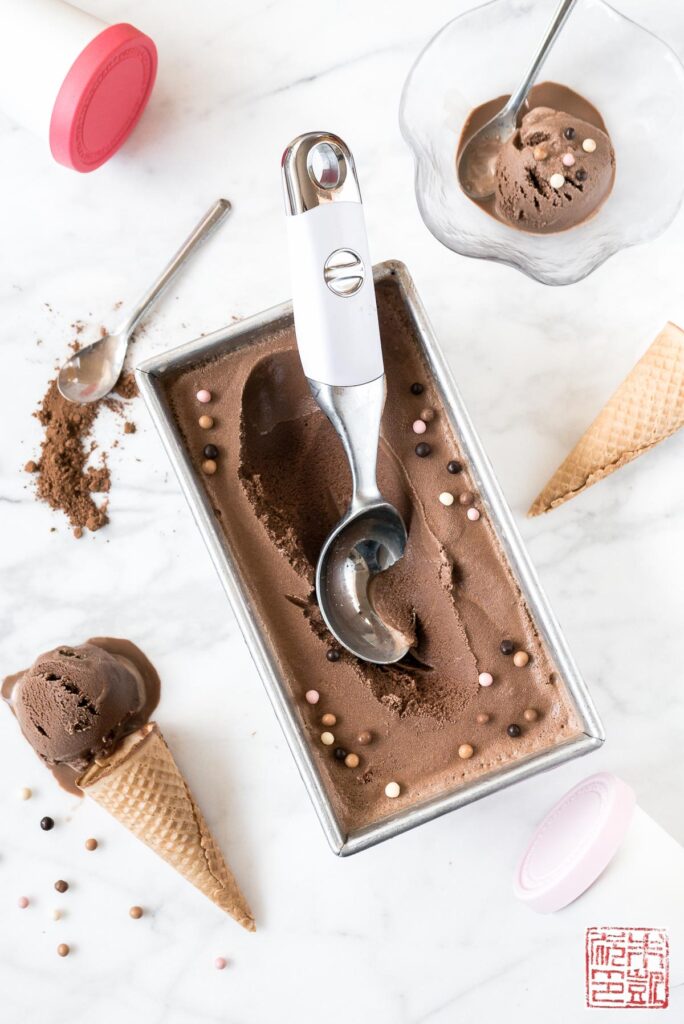 Coletta Gelato, a new ice cream shop in San Francisco’s SOMA district, has gelato so tasty I wish I still lived nearby – a handful of years ago it would have been walking distance from my apartment. In a city that’s fairly obsessed with ice cream, Coletta has quickly made its mark with some fantastic handcrafted gelato that immediately conjures up a stroll down a cobblestoned street on a hot summer day in Italy. I had a chance to visit a few weeks ago and it’s rapidly jumped onto my list of favorite ice cream shops in San Francisco. 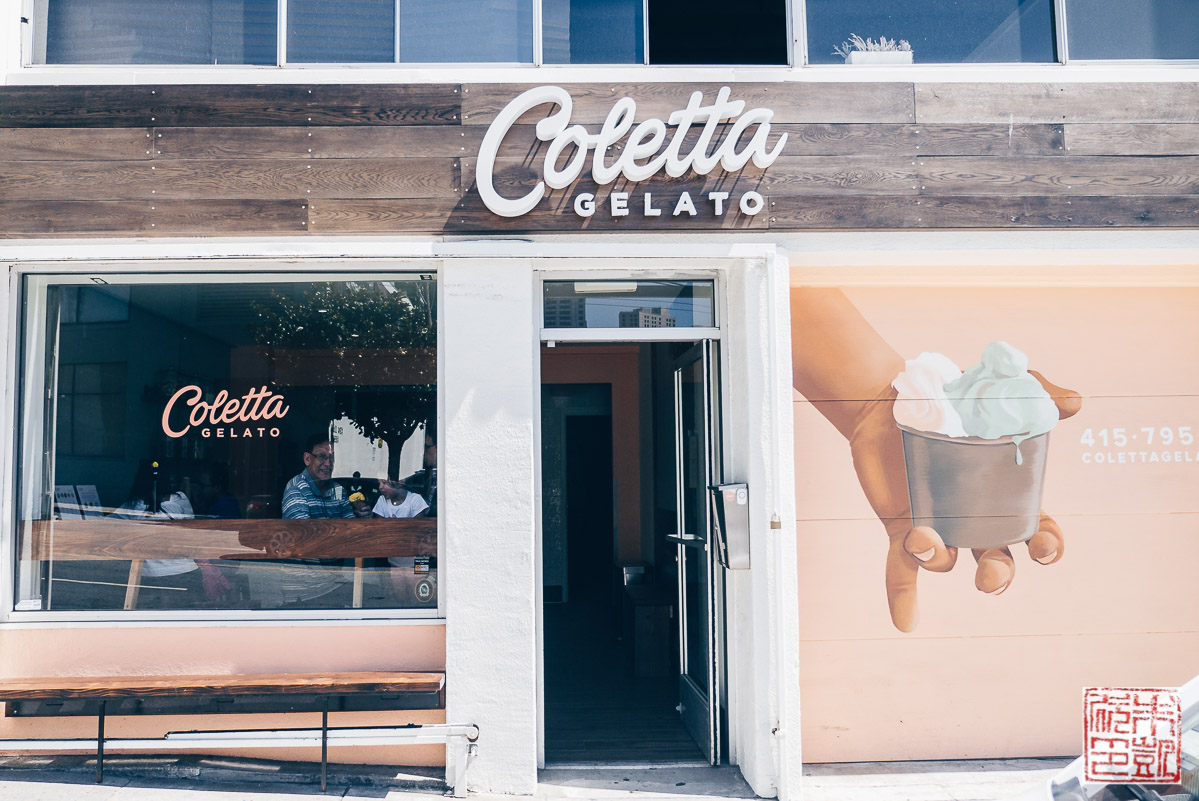 The shop in SOMA. So what’s the difference between ice cream and gelato? Gelato is typically made with more milk than cream, versus ice cream which typically use more cream and has a higher percentage of fat than gelato. Gelato is also churned more slowly than ice cream, which incorporates less air into the mixture, making the resulting product denser. These differences give ice cream a lighter, fluffier texture and a richer, more buttery mouthfeel, and gelato a smoother, more silky texture and cleaner taste as there’s less fat to mask the flavor. 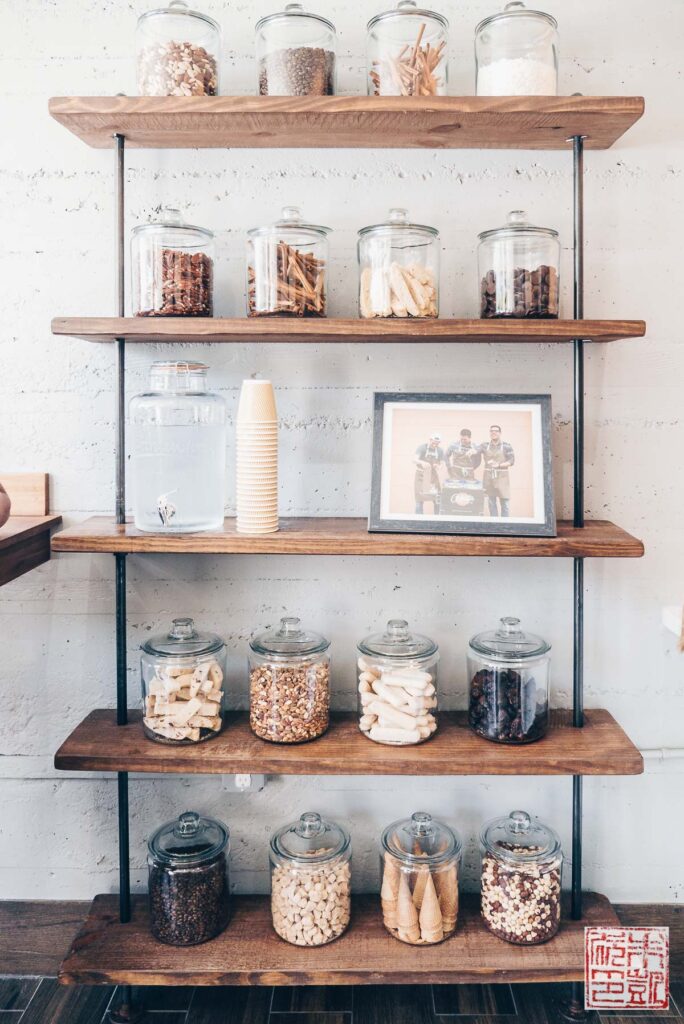 I met one of Coletta’s founders, Antonio, and got a tour of their store and kitchen. Antonio and co-founder Henri met in Milan, Italy, and decided to study the art of gelato making at the Gelato University in Bologna (which, ok, if I needed another reason to return to Italy, I now have). Their training and passion have led to Coletta and some really delicious gelato. There’s a lot of good ice cream in San Francisco but this is the first that really brings me back to my days in Italy. 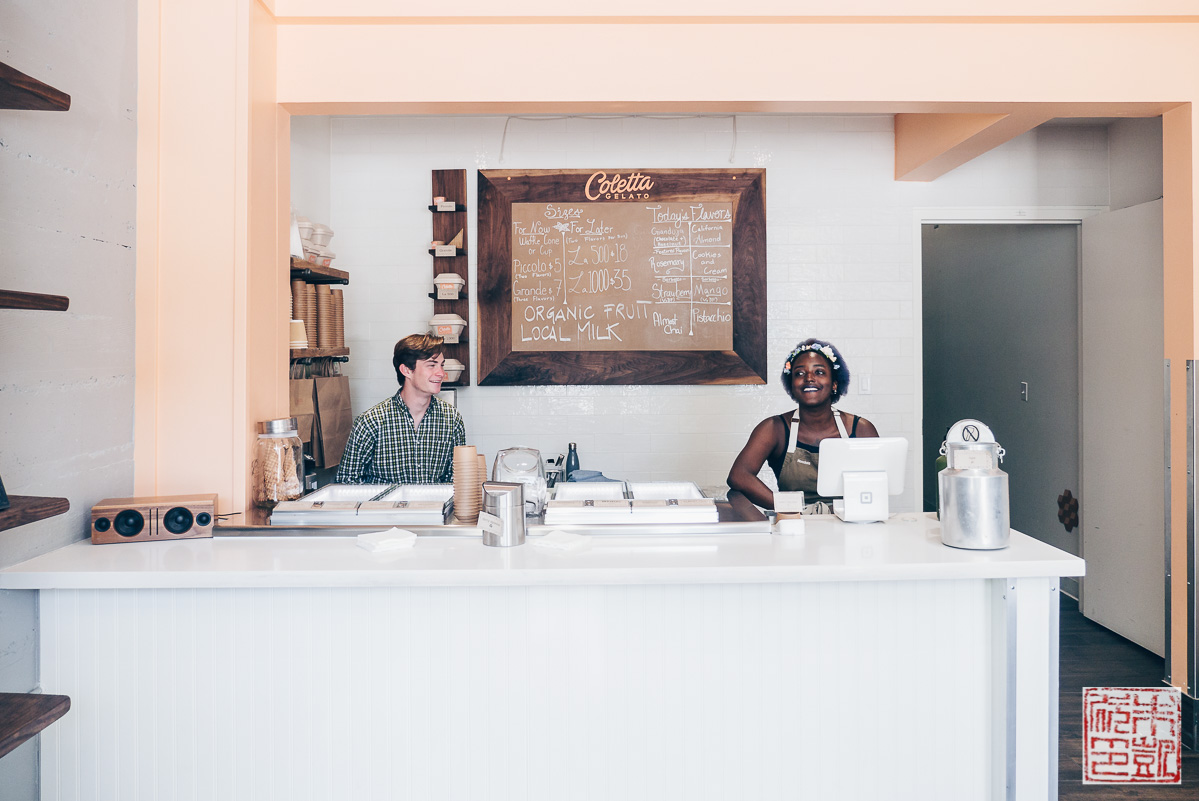 I love the cool and refined interior of the shop. Everything is fairly minimalist; there are about eight flavors available that rotate weekly, a choice of cup or housemate waffle cone, and that’s about it. Coletta prefers to focus on the flavor and quality of their gelato, which I really like as a change from the current over-the-top mix-ins and toppings trend for desserts. It’s just quality, very well made gelato here. 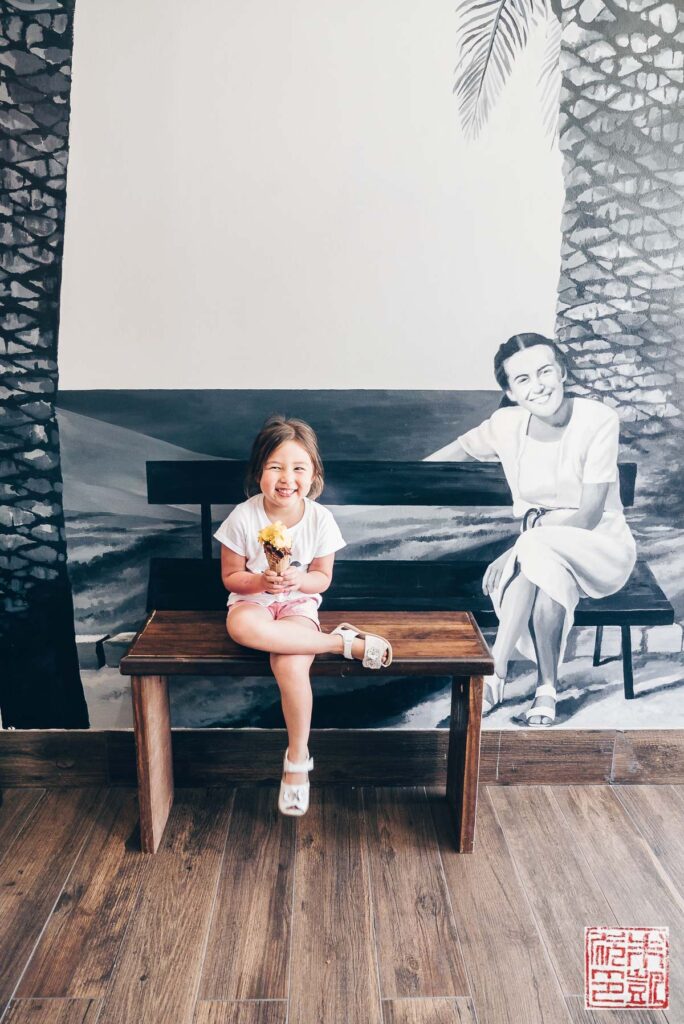 The store is named after Henri’s grandmother Nicoletta – you can see her in the store mural welcoming customers to the store. Also in the photo above is Isabelle enjoying a double dip cone of mango sorbetto and some freshly churned chocolate sorbet. 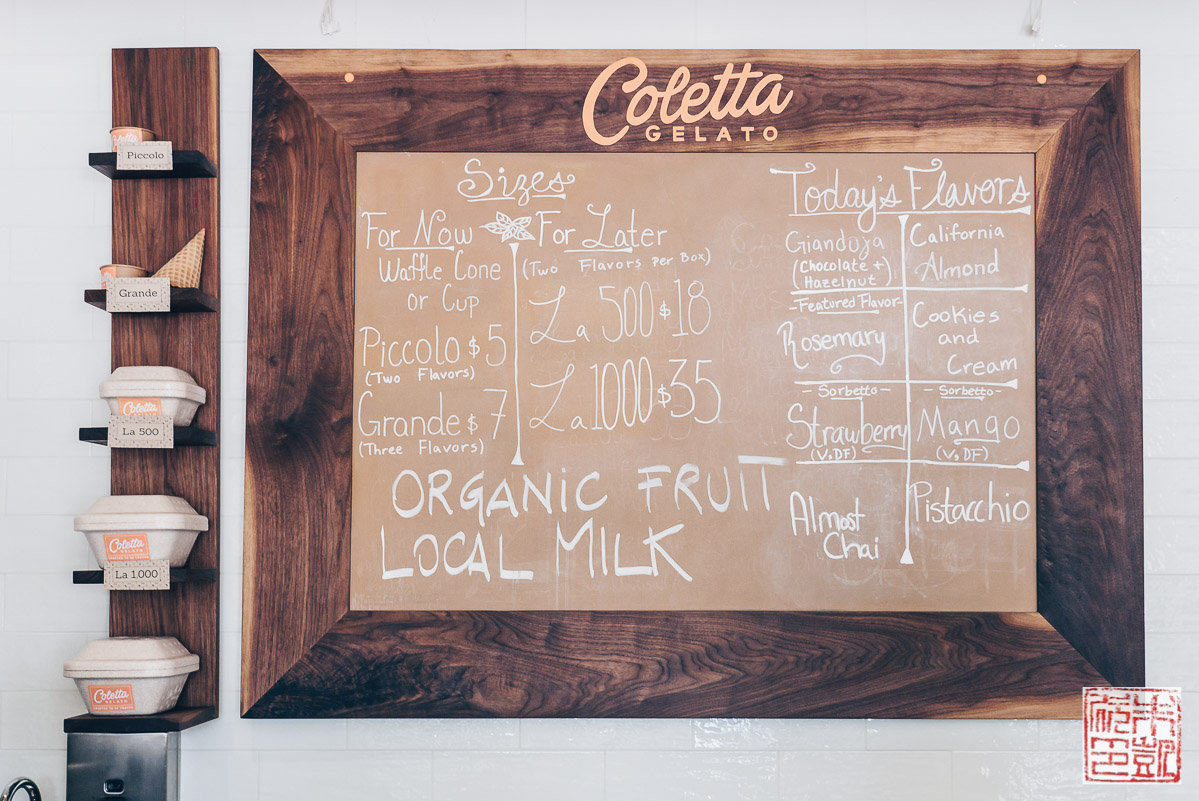 The menu board. All the gelato is made in micro-batches for freshness: Antonio believes that their gelato is best served within two days, for optimum flavor and texture. After doing a tasting, I thoroughly believe it; Coletta’s gelato is so velvety smooth, without any hint of iciness or heaviness. It’s perfectly refreshing, the way ice cream is meant to be. Their signature flavors are the pistachio and gianduja, but I also really liked their sorbets. The depth of flavor they get in their gelato is wonderful; you’re tasting the nuts and fruit, and not sugar. 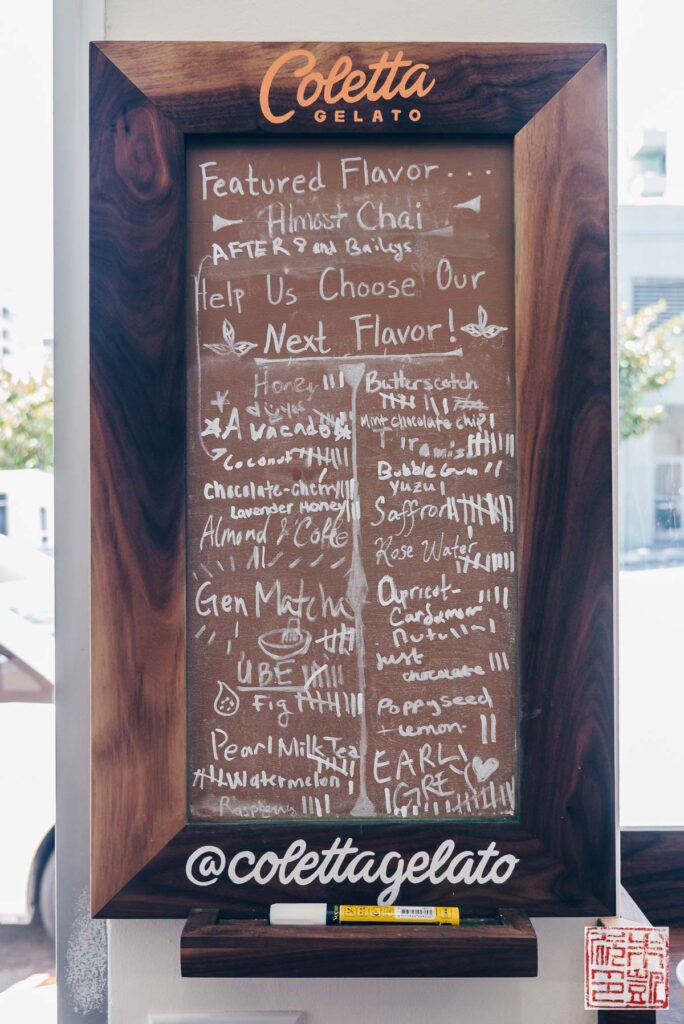 I also love the flavor suggestion board at the front of the store – sign me up for Earl Grey or pearl milk tea, please! 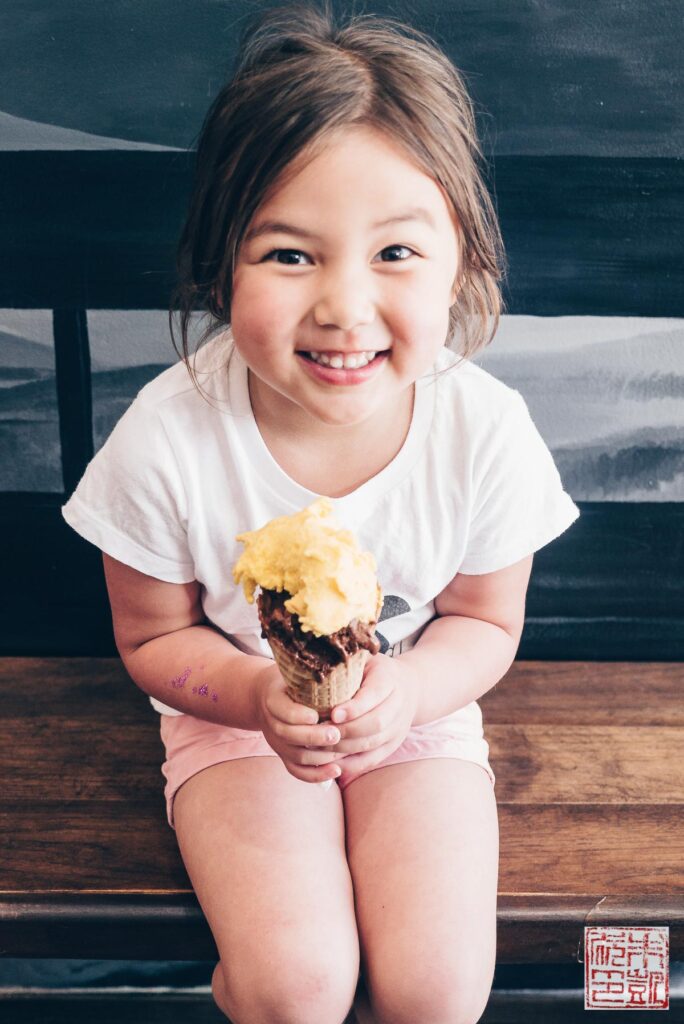 Antonio and Henri have big plans for Coletta; currently they have the one location in SOMA, and they recently just opened a pop-up in the Mission at Harrington Galleries. I look forward to stopping by Coletta whenever I need a reminder of Italy. 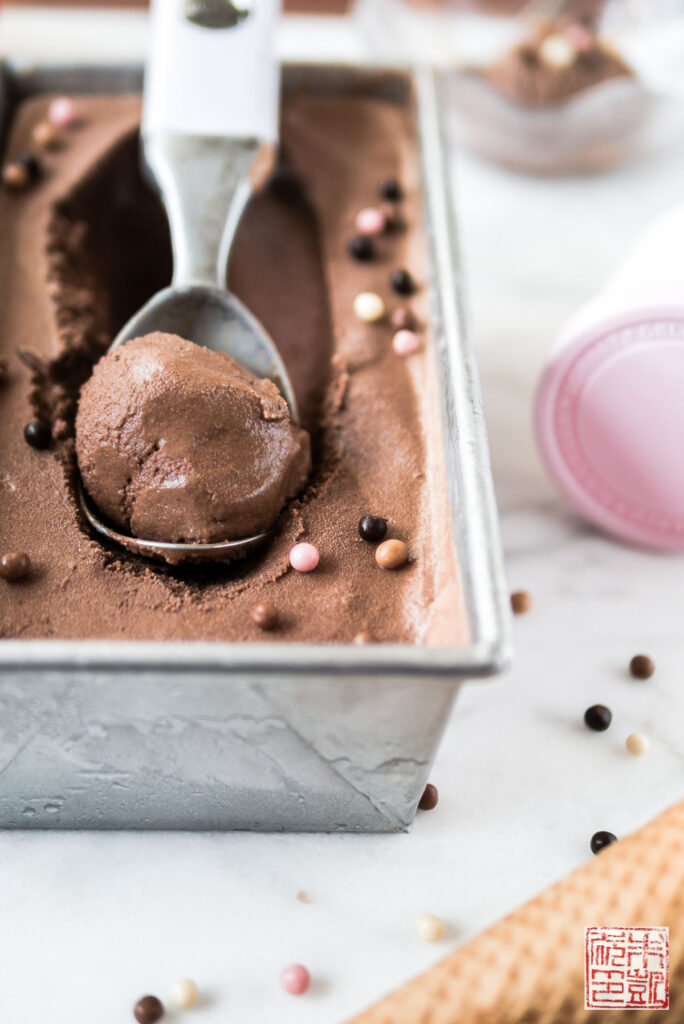 So while giving me a tour of the kitchen, Antonio shared one of his latest batches, a chocolate sorbet he was particularly proud of. As well he should – I’m going to give Coletta one of the best compliments I can think of: I rarely get chocolate ice cream, but I would go back for Coletta’s chocolate sorbet, even over their other flavors.

This chocolate sorbet I made a week later at home is not Coletta’s – you really should go and try theirs, but for those of you who don’t live near San Francisco, David Lebovitz’s version is a lovely alternative. Use the best cocoa powder and chocolate you can find, and you’ll be rewarded with a memorable sorbet. 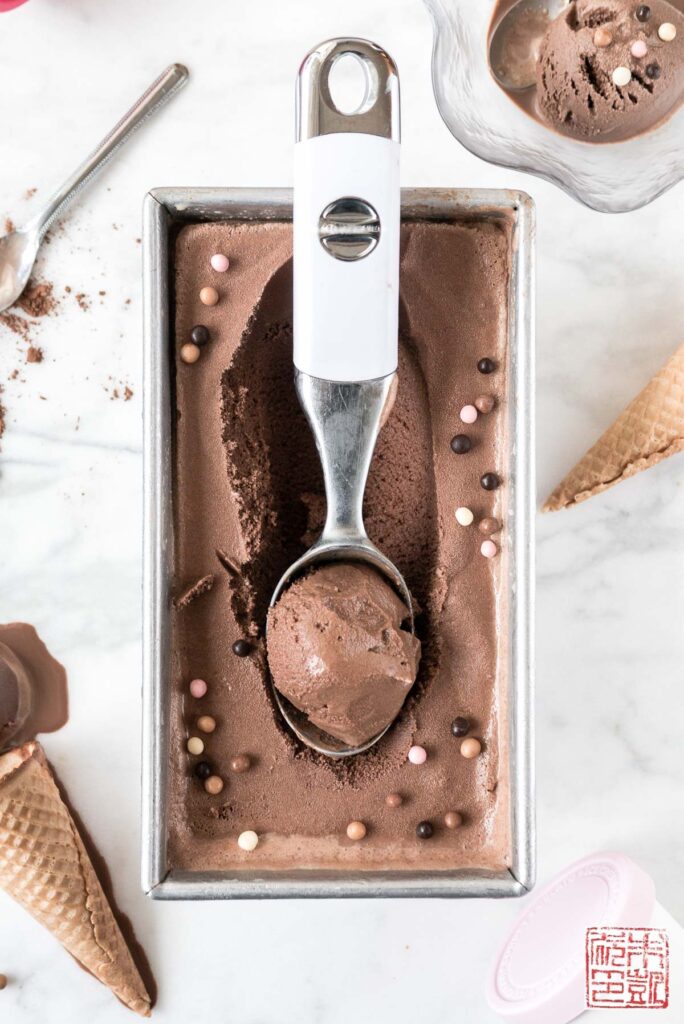 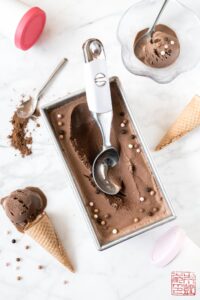