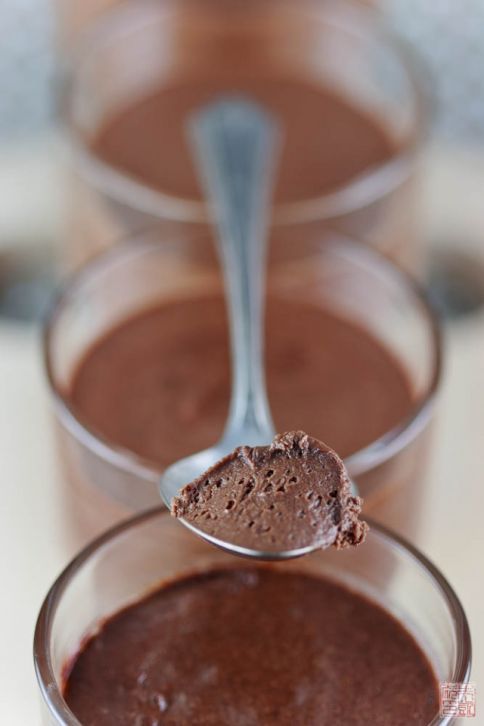 Thanks for the feedback on my mousse project! As I anticipate typing the word “mousse” about a hundred times in the next couple days, I am totally waiting for “mouse” to slip into one of these posts and elude both the spellcheck and my mousse-addled eyes. If only I could blame Autocorrect when that happens… 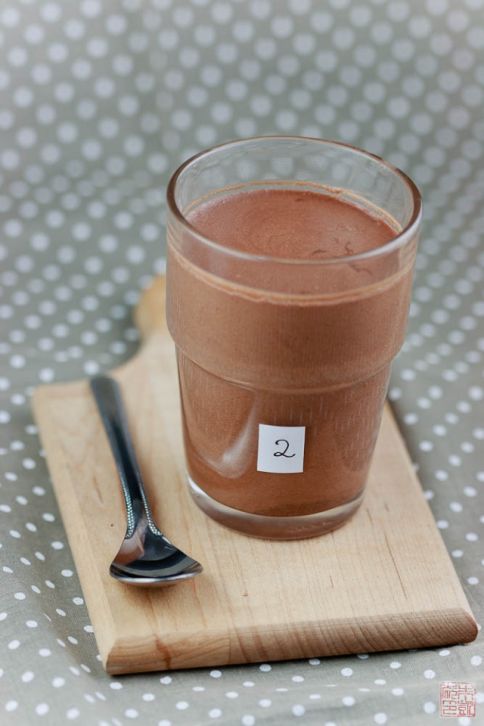 The second chocolate mousse in my lineup has a rather unexciting name like #1: it’s merely described as egg-free chocolate mousse. However, it’s definitely tasty, and it’s a good alternative for those people with egg allergies.

This is also the only mousse that relies almost entirely on gelatin to set the mousse. Although there’s whipped cream folded in, the amount of milk added means the mixture stays fairly liquid  – unlike mousse #1, you can’t eat this straight from the mixing bowl (maybe you could drink it like the world’s richest chocolate milk). It requires time to set in the refrigerator, and it softens quickly once it’s taken out.

It’s almost like a Bavarian cream, except it’s even lighter since traditional Bavarian creams are made with a creme anglaise. In fact, the Cooking with Chocolate does contain a recipe for a Chocolate Bavarian Cream, but I didn’t make it as it was described as “one of the least chocolatey.” And, as I mentioned, I had run out of chocolate and refrigerator space. Maybe if I ever do a second go-round of this exercise, I’ll get to make this one.

The generous amounts of dairy give this egg-free mousse a fantastically soft and creamy mouthfeel. I feel like it almost straddles the line between mousse and pudding. Some people like their mousses thick and firm, while others prefer them light and soft. This mousse would be for the second group of fans. It practically dissolves in your mouth the second you lick it off the spoon.

All that milk also gives this mousse a lighter, milk-chocolately flavor. It’s almost the polar opposite of mousse #1: where the first is like standing outside in the summer sun, #2 is like spring sunlight streaming in through the window. It’s delicate and soft, like a childhood memory of chocolate mousse. In fact, this is probably a very kid-friendly chocolate mousse; it’s got comfort food written all over it.

Despite their being at opposite ends of the chocolate mousse spectrum, I think this is a great mousse for straight eating as well. It’s the airiest of the five, and the strong dairy component means it can show off flavor infusions well, if you feel like playing around with your mousses. In comparison, I probably be more judicious about adding flavors to mousse #1 because I think that recipe really showcases the chocolate, and I wouldn’t want other flavors to take away from that. This mousse is a more forgiving base to play around with.

So now you have probably the two most different mousses I made. The next few ones start to get closer in style, and the differences become more nuances. Stay tuned! 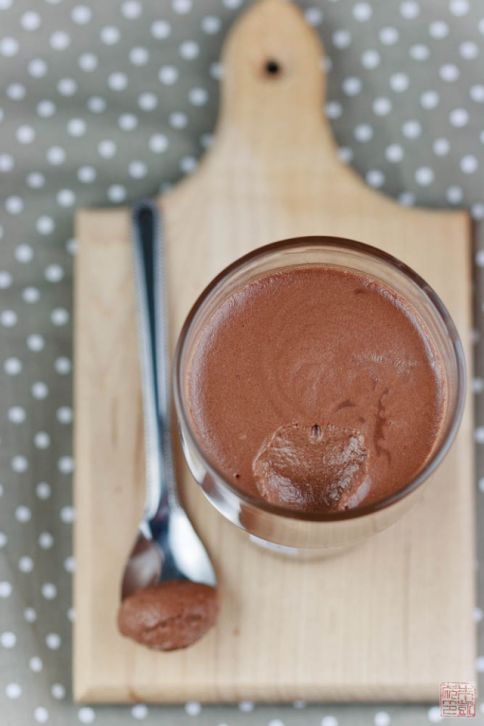