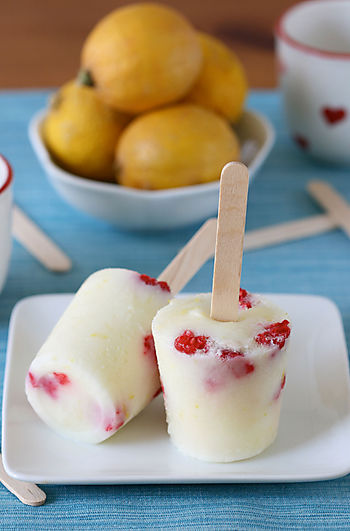 You know what’s really fun on a hot, sweltering, summer’s day? Licking a blissfully chilly popsicle down to the smooth wooden stick, racing to finish it before it all melts down your chin.

You know what’s really not fun on a hot, blistering, summer’s day? Trying to take photos of these popsicles before they melt all over your kitchen table and you have none left to eat!

I made these little pops in the middle of a heat wave last week; they were a no-brainer given that blazing sun coming into apartment + no air conditioning meant turning on the oven = not happening. However, I didn’t foresee that I would be attempting to document these ephemeral little dainties on the hottest day of the heat wave. So, unless you are a professional photographer with a climate controlled studio and a food stylist at your side with several dozen popsicles waiting as backup in the freezer, what this means is planning out your shots very carefully in advance, taking out the popsicles at the very last moment, and then snapping away like mad before returning the rapidly defrosting pops to the freezer to recover.

As it was, I just managed to get two different setups, so there’s a dearth of images in this entry, but I hope they’re enough to convey the sheer delight a frozen popsicle can bring. Have you ever held a popsicle just a hairsbreadth away from your cheek, so you can feel the tendrils of coldness uncurling towards your face? Or unwrapped a popsicle, covered in a dusting of frost, and worked to lick all around the popsicle until its true, vibrant color was revealed entirely? Or saved a red-stained popsicle stick after you had finished off the pop because even though you couldn’t eat it, the stick is still an essential part of the popsicle, and it reminded you of how delicious it was?

I decided to make some frozen yogurt popsicles, as I’ve noticed the frozen yogurt trend has gone from latest new sensation in San Francisco to a full-blown craze. There seems to be a frozen yogurt shop opening on every other block, all of them with some sort of variant of “Yogurt” or “Berry” in their name, and all of them offering tart, creamy goodness in a cup.

I confess when I first heard of the Pinkberry sensation I didn’t quite get what was going on. After all, I’d already been through the last frozen yogurt wave in college, when the dinner of choice for dieting co-eds was a 12 ounce of froyo from the shop across the street from the dorms. Back then, frozen yogurt either tasted remarkably the same as ice cream, meaning it didn’t contain much yogurt, or it tasted like artificially flavored whipped air – suffice to say not my dessert of choice.

However, it seems like now yogurt actually tasting like yogurt is no longer a liability, and people are flocking to the tart, “yogurty” taste as a healthier, lighter alternative to ice cream. Many of the most well-known frozen yogurt franchises, like Pinkberry and Red Mango, originated in Korea, which is not surprising as tarter, less sweetened versions of yogurt have long been much more popular in Asia than in the US. Also, the favored toppings of fruit and mochi dovetails with classic Asian preferences for fresh, clean, not-too-sweet desserts.

The best part about frozen yogurt to me, though, is how simple it is to make at home. It’s even simpler than ice cream, since there’s no need to muck about with making an anglaise base or anything like that. Simply take some yogurt, combine with some sugar, chill, and whirl away in the ice cream maker! Much of frozen yogurt’s appeal is in its straightforward tang; you want to taste the tartness, not mask it. However, you can add more sugar to taste if you want a sweeter, less assertive flavor. I also added lemon juice to my mixture since the citric flavor of lemon meshes well with the yogurt and makes it even more refreshing; it tastes almost like a lemon sherbet, one of my favorite flavors. Also, since you can’t have frozen yogurt without toppings, I tossed in some raspberries, which made them both colorful and even more delicious.

If you have those miniature Dixie cups, they are the perfect size for making little popsicles. Just pour in the churned base, insert some wooden sticks, chill in the freezer, and the next day you’ll be able to peel off the paper and enjoy – hopefully under a warm summer sun. 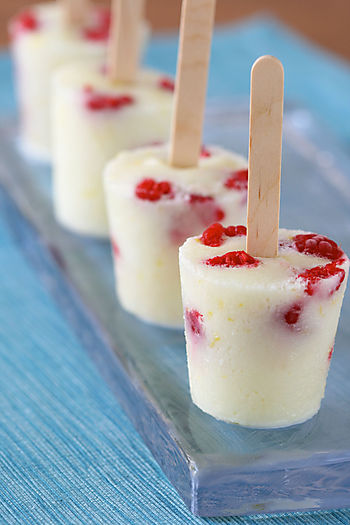