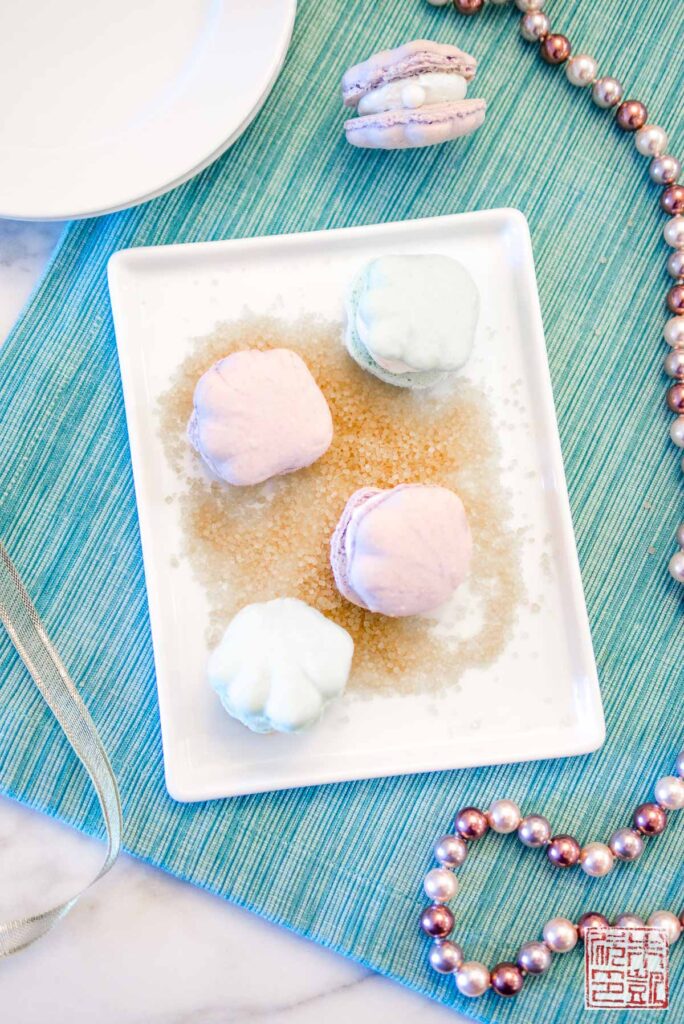 I wanted to share a special order I did for a client a month ago: seashell macarons for a mermaid-themed birthday party. Although I’ve made Minnie macarons for my daughter’s birthday, I haven’t tried piping any more complex shapes, so this was a fun challenge. They were surprisingly easy to do and make a striking centerpiece to any event. If you want the template I used to make these macarons, scroll on for the download! 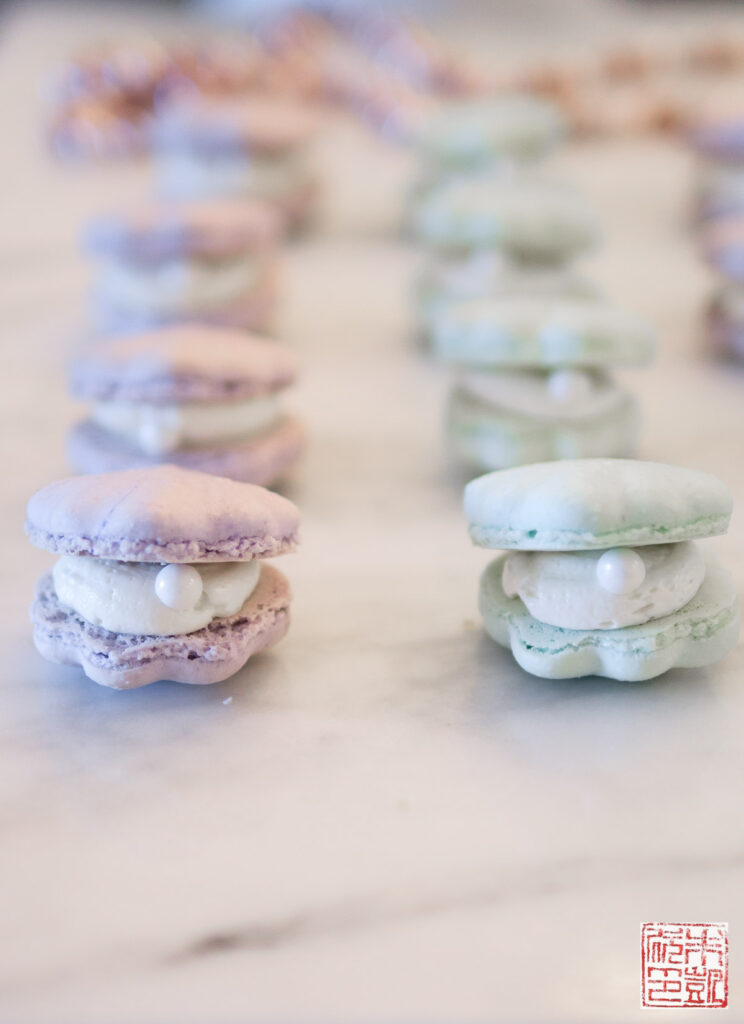 I used my basic Italian meringue macaron recipe for these macarons; it has the advantage of being stiffer and more forgiving than French meringue, which is useful when you’re working with piping more complex forms.

Of course the trick to piping shaped macarons is to get that all-important macaronnage just right (click the link above to the original macaron recipe for tips). When piping a complex shape like this seashell, it’s better to keep the batter on the stiffer side, as it will keep its piped form better instead of running into one giant blob. Remember that as you let the batter sit and when you fill the piping bag it will continue to loosen up the batter. So start off with fewer strokes to make the macaron batter, and adjust after you see how the first batch turns out. I also used a smaller piping tip – about 1/4″ diameter or Ateco 802 plain – for better control over my piping. 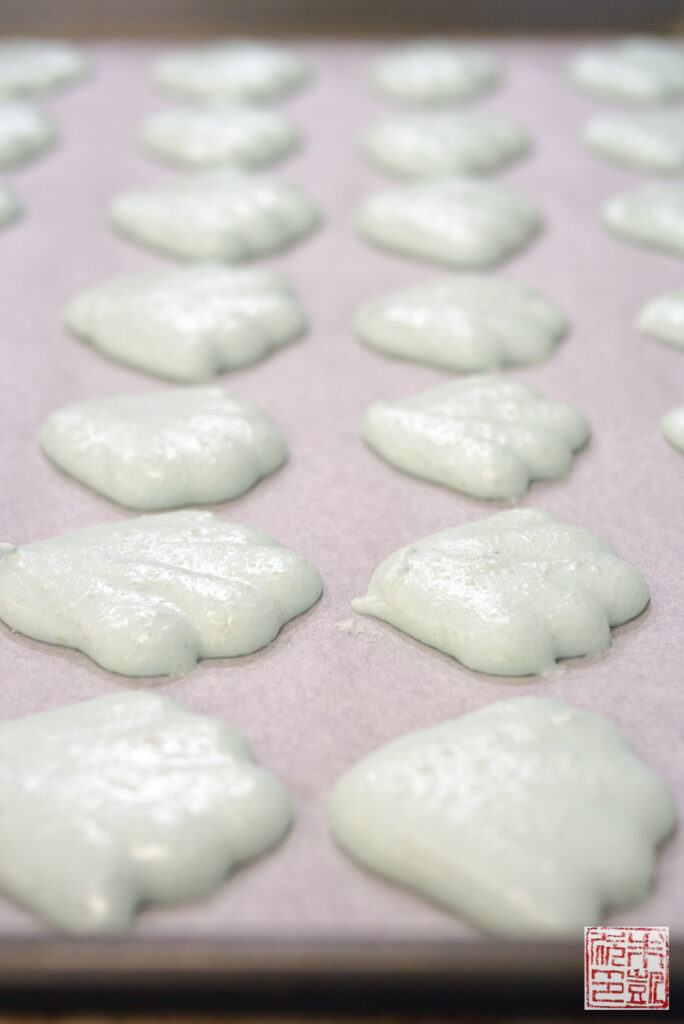 You can click on this link to download the template I created to pipe my seashell macarons:

I developed from this pinterest link. Print it out at 11″x17″ and it will fit on a half sheet (13″x18″) pan. Don’t pipe directly on the template; place it under a sheet of parchment paper so you can still see the template through the paper. After you finish piping the macarons, you can slide the template out from under the parchment and reuse it.

The way I piped these seashells was by starting at the base of the shell, piping a line up one of the outside “flutes” and then coming back down over it, then piping the next flute over, and so on in one continuous motion. If you get your macaron batter to the right consistency, the piped lines should soften while maintaining the ridges between flutes. If the piped seashell loses all definition, your batter is too soft. If it doesn’t soften at all, you can let the batter sit for a bit to loosen up.

The requested flavor for these macarons was vanilla, but I did think long and hard about what kind of flavor might be appropriate for some seashell shaped macarons. In the end, I came up with a sea salt vanilla buttercream, which gives just the slightest hint of the ocean. If you have pearl luster dust, you can sprinkle some on the piped buttercream or the macaron shells to give them that luminescent glow. The “pearls” themselves are large sugar pearls similar to these – I placed them in the shells about a day ahead of time and kept the macarons refrigerated, and they held up fine.

After how well these turned out, I’m looking forward to making some more creative macarons in the future! 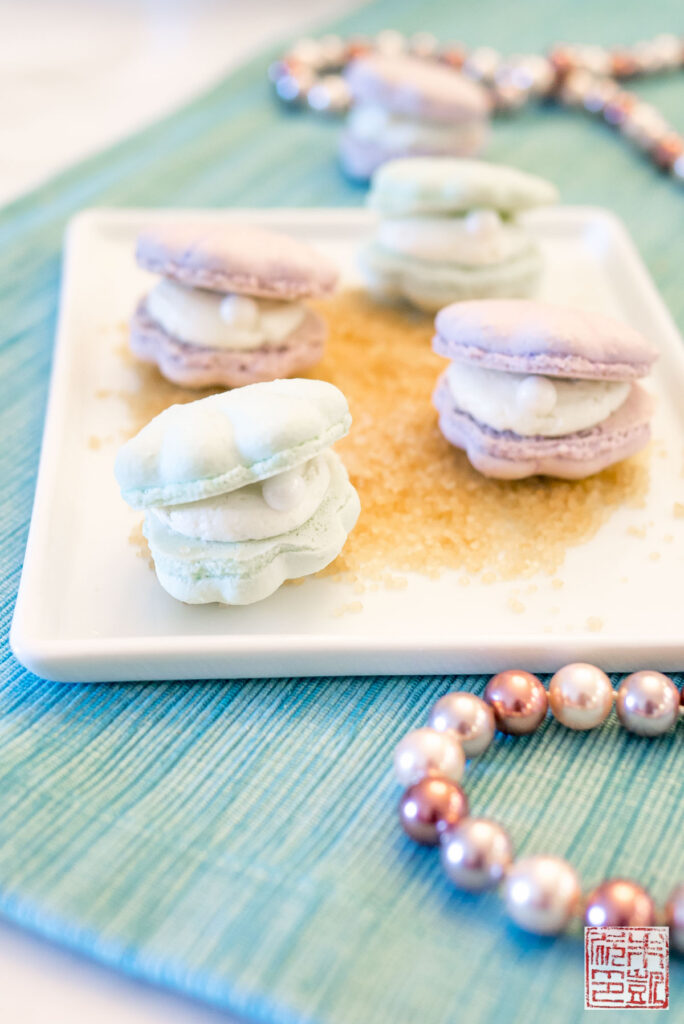 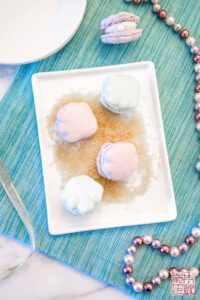