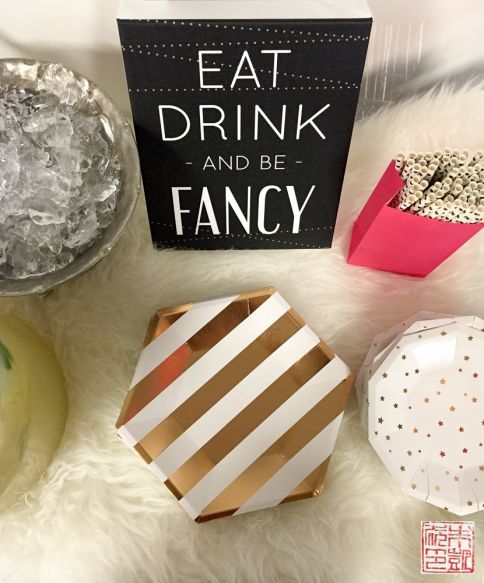 Thank you to all for you for your kind wishes about my upcoming cookbook! I’m so excited to keep you updated on the news in the next few months!

In between wrapping up work on the book and writing for the blog, I got to be part of some fun events in the last couple of months that I’d love to share with you now. One of the best parts of being in the food world, of course is getting the opportunity to see what others in your field are up to, make connections and get inspired, and perhaps eat some really good food at the same time. Below, some of the best parts of the last few weeks: 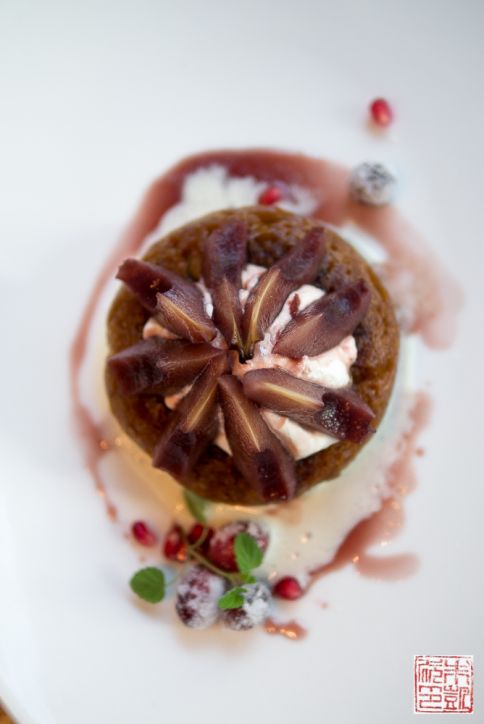 Back in October I had the opportunity to meet the new pastry chef at Bluestem Brasserie, Curtis McDonald, and sample his inaugural dessert menu. Bluestem is a classic American brasserie with a San Francisco slant: they favor local, sustainable ingredients and. Chef McDonald is a soft-spoken but passionate guy; when pressed for his favorite dessert, he demurred that it would be like choosing his favorite kid. McDonald has a fondness for the Japanese precision in cuisine and mixes to create a fun and modern play on American nostalgia. 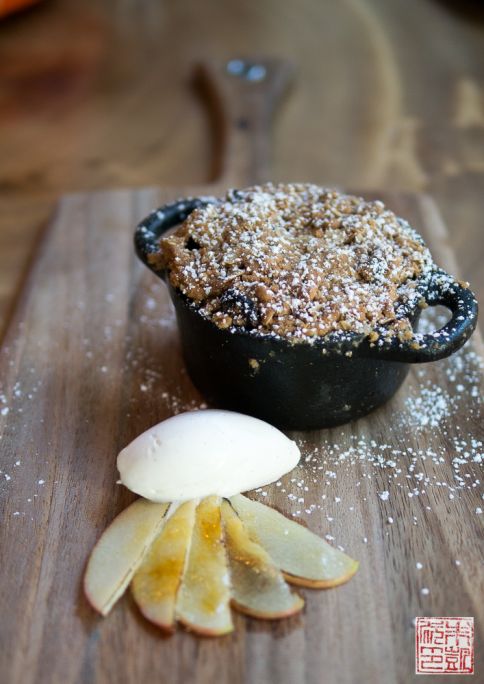 My favorite dishes of the dessert tasting included the Scentual Healing, a rum soaked savarin cake with poached pears, sugared cranberries, and vanilla bean anglaise, what McDonald called “a pastry chef’s dessert”; a heartwarming individual-sized apple crisp served in a mini cast iron pot with pine nuts, cranberries, and bruleed apples (I was inspired to do something similar with the apples on this dessert); and the Nutty Buddy Malt, a whiskey-laced malt topped with homemade peanut butter malt balls and a peanut butter marshmallow. 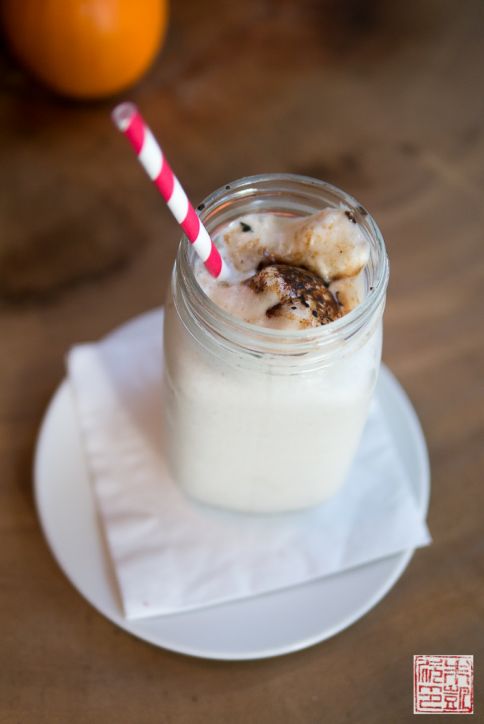 The current wave of fantastic stand-alone bakeries, bread makers, and pastry shops in San Francisco is fantastic, but it’s nice to see traditional restaurants grabbing a bit of the spotlight back. Chef McDonald is also creating some special limited edition desserts for the holiday season, including a update of Bluestem’s signature Cookie Jar sweets plate, so a return visit will be in my very near future! 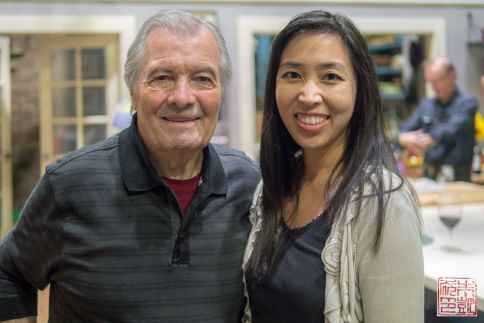 jacques pepin and me

When you get the opportunity to meet one of the most legendary chefs in the business, you don’t say no. As they say in the kitchen, there is only one appropriate response: “Oui, chef!” 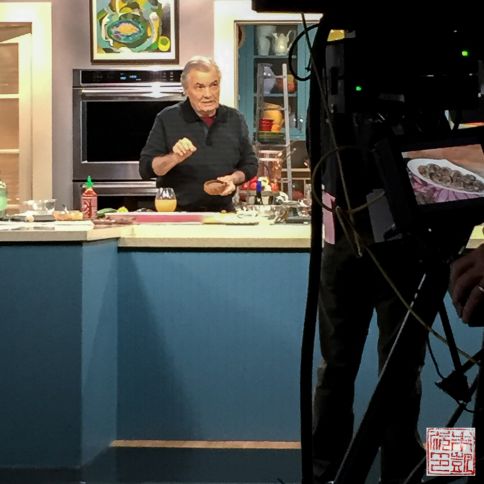 Chef Jacques Pépin was at the KQED studios in San Francisco to tape his final cooking series for television, Jacques Pépin: Heart & Soul. This series will also serve as a retrospective on his long and distinguished career in food, and will include treats like Pépin at home, visits from colleagues like Ming Tsai and Rick Bayless, and clips from his previous cooking series. The 26 episodes will mainly focus on Pépin’s favorite recipes and simple, classic cooking techniques that he has spent so much of his TV career teaching to eager cooks. 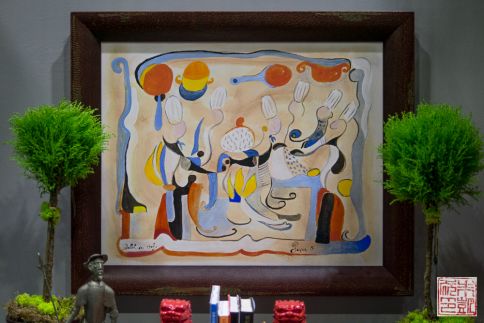 A lovely tidbit: Jacques is a passionate painter as well and its his art that decorates the set of his show!

It was fascinating to get a look behind the scenes of a TV show, and what everyone remarked on was Chef Pépin’s incredible work ethic. They were filming three episodes a day, with about four dishes for each episode. Chef Pépin was a consummate professional: he barely took any breaks, and I don’t think I saw him flub a line once. When the camera started rolling, he simply started talking, seemingly extemporaneously, about his home in Cape Cod, his wife’s favorite preparations of seafood, taking his granddaughter out fishing, all the while filleting a fish, or cooking some clams, or making a sauce.  The particular taping I attended was centered around seafood so we got to hear about his love of Cape Cod and how he loves cooking with the local bounty there. 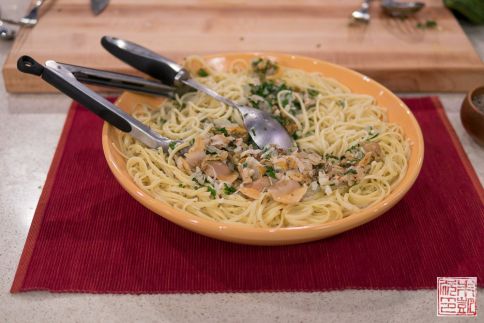 Jacques Pépin: Heart & Soul is set to air on PBS in fall of 2015, so I’ll be sure to cover that when the time comes as well. Thanks KQED for the invitation to visit the taping and see a master at work! 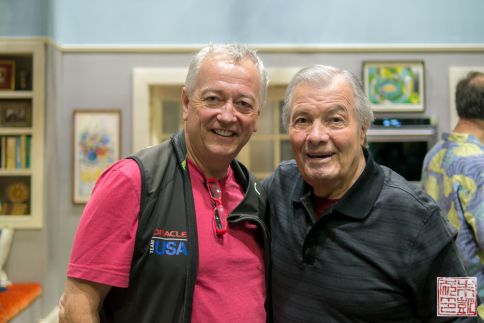 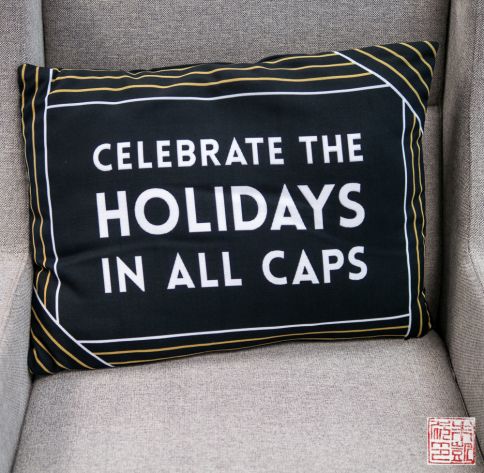 We all know that the second Halloween is over, the holiday season goes into full gear. My very first official holiday party happened the day after Halloween, a joint event hosted by Tiny Prints and Best Friends for Frosting. I’ve long been a fan of Melissa’s super chic and girly lifestyle site, and she and her team lent their glam touch to the festivities.

Tiny Prints is part of Shutterfly and specializes in personalized cards, invitations, and other stationery. I’ve long been creating my own cards using my food photos, and once Isabelle arrived I started making the obligatory family-montage Christmas cards as well. I was especially taken with Tiny Prints’ laser-cut and foil-stamped cards: particularly eye-catching for the holidays! Tiny Prints has also recently expanded into home decor, such as pillows, photo blocks, and ornaments – we all got these as take home gifts! 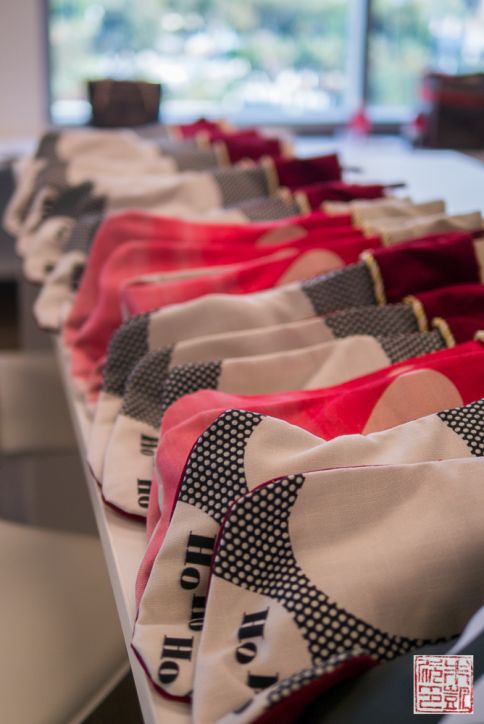 I adored the white, gold, and pink theme. And the dessert table was pure holiday glam. 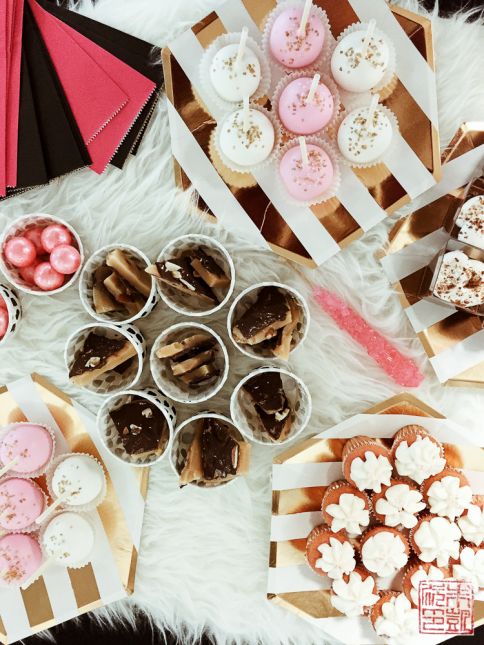 Melissa also demo’ed a quick DIY using gold paint to decorate a mini flower pot, which would make for a simple centerpiece or hostess gift. I am sadly pretty deficient in the DIY gene but even this is something that would be hard to me to mess up. 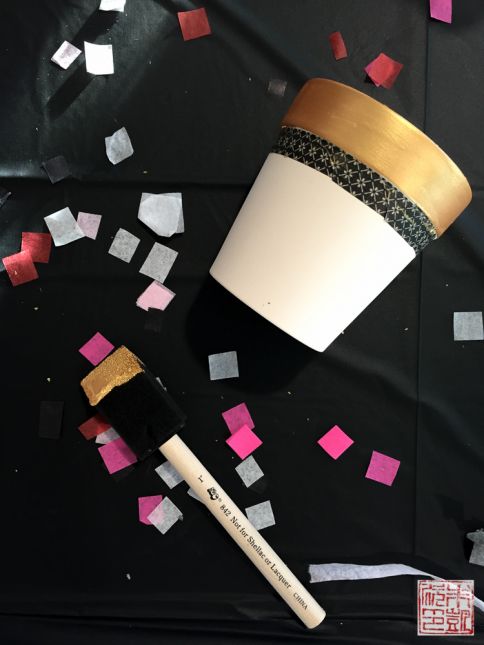 It was great to meet up with some blogger friends, make new acquaintances, and get into the holiday spirit. Thanks to TinyPrints and Best Friends for Frosting for a lovely, inspirational holiday bash! 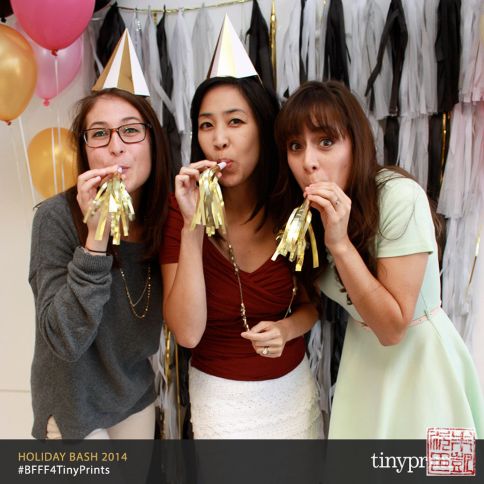 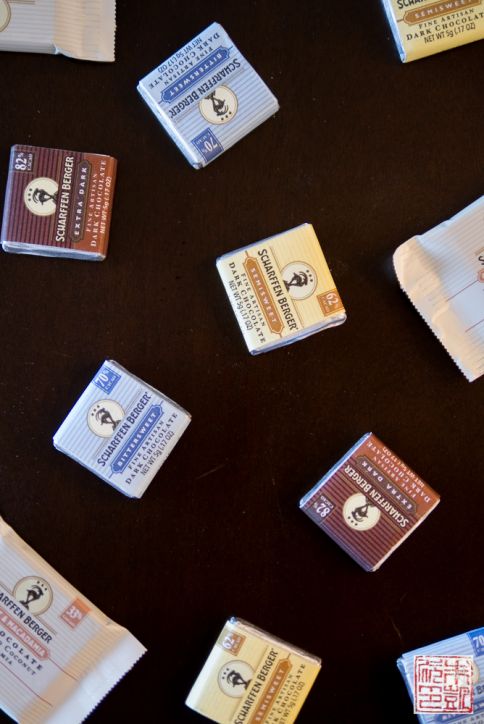 A couple weeks ago, I was invited to be part of a Google Hangout on wine and chocolate pairings, featuring Scharffen Berger‘s chocolates and wines from Ferrari-Carano Vineyards in Healdsburg. Although I was unable to participate, Scharffen Berger still passed along a set of the wines used in the pairing class, along with some of their chocolates for sampling. I have been a longtime fan of Scharffen Berger and they’re one of my go-to chocolates when baking.

You can watch the archived chat, which features Scharffen Berger chocolate expert Cy Olney and some other food and wine bloggers, at Bakespace. He gives several interesting and helpful tips on which types of wines go with different types of chocolate.

The four featured pairings were: 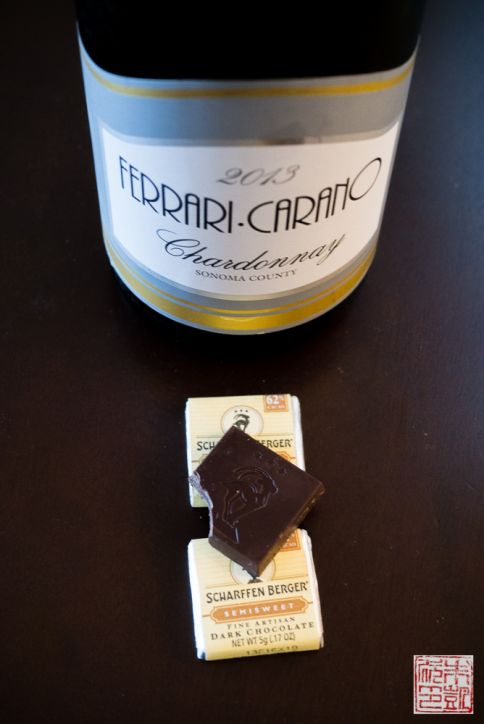 Red wine and dark chocolate has already been pretty established, so I was most curious about the white and dessert wine pairings (not coincidentally my preferred wines). The Chardonnay is a classic example of a Sonoma County Chardonnay, big and buttery with citrus notes that give it crispness and an oaky finish. The Scharffen Berger 62% is a great, easygoing eating chocolate for me: its softness and mildness helps round out and sweeten the chardonnay where a darker chocolate might compete with its bitterness. Together, they pull additional richness out of the other, which to me makes a successful pairing. 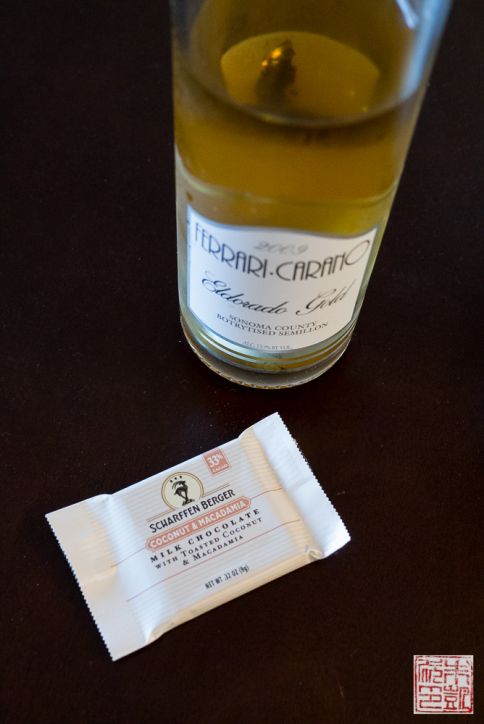 No surprise that I looked most forward to the Eldorado Gold Botrytised Semillon. Like many dessert wines, the Eldorado Gold had lovely honey and apricot notes. It wasn’t as intensely sweet as say a Tokaji, but I find its lighter body makes it easier to pair with desserts without overpowering them. The Scharffen Berger 33% with Toasted Coconut and Macadamia was an interesting pairing, and I think the added flavors of coconut and macadamia gave it a lot of more dimension than just a simple plain chocolate. The softer creaminess of the milk chocolate also suits the semillon better than the drier finish of a dark chocolate.

Thanks to Scharffen Berger for a sweet evening of wine and chocolate!

Whew! And to think that the festivities are just getting started – we’re all waiting on Thanksgiving and the day after, I know! I’m actually looking forward to a bit of rest on Thanksgiving, a chance to catch my breath before the final rush to end of the year. I hope you are all preparing for some holiday cheer with your loved ones!

Disclaimer: I was invited to these events and provided product samples as a member of the press. I was not paid for this post and all opinions here are my own.

« Announcing My Next Cookbook: Lollipop Love
{Sweet San Francisco}: Best Pies in SF (and a bit beyond) »