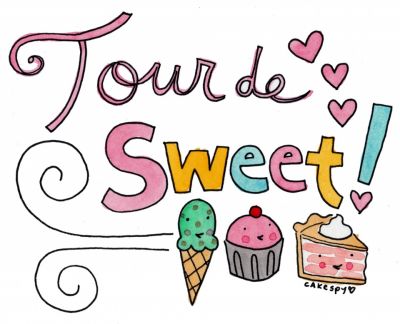 Cupcakes, unicorns, and rainbows. Today I’m excited to be part of CakeSpy’s Tour de Sweet blog tour! Cakespy is one of my favorite sweet blogs – the adorable graphics and quirky fun recipes definitely make it one of the most distinctive sites out there. I love Cuppie the cupcake – his smiling face and his group of equally delicious friends always makes me smile when I visit the website.

I was honored to get an advance copy of Jessie (head CakeSpy)’s new cookbook, Sweet Treats for a Sugar-Filled Life

, and I’m happy to say it’s just as captivating as her site. It contains over 60 recipes for some wildly outrageous concoctions like Cinnamon Rolls Stuffed with Chocolate Chip Cookie Dough, Cupcake Stuffed Cupcakes, and Red Velvet Cake Shake. I wish my dessert dreams were as creative as Jessie’s. The cookbook is liberally sprinkled with artwork of Cuppie and his companions. As someone with zero drawing ability, I love her art – it really helps set the cookbook apart from all the other cookbooks out there and adds to the zany and whimsical feel of the book.

Unfortunately, since I was on vacation last week, I didn’t get a chance to send Jessie some interview questions, but after reading her cookbook, I applaud her for bringing such a unique and creative vision to desserts. The recipes all sound like wonderful crowd-pleasers (fried cupcakes – genius!) and they are all clearly and simply written, and are easy enough for most any home baker. I also like the large number of photos – along with the hand-drawn art, it makes this cookbook a visual treat to leaf through and really brings you into Jessie’s sugary world.

It was hard to choose which recipe to make first, but I tried out her Blondie-Topped Brownies, because I’m always a fan of not having to choose. This recipe is exactly as described: a moist fudgy brownie layer topped with a sweet, butterscotch-y blondie layer. It’s quick to make, and the flavors mix together surprisingly well. And it’s certainly a conversation starter, like most the other recipes in the cookbook. (I’ll put up the recipe if I get the ok from Jessie).

Congrats on a great first cookbook, Jessie! As part of her book launch, Jessie will be touring several cities, and she’ll be in the Bay Area next week at two great foodie locations: Teacake Bake Shop and Omnivore Books. I’m looking forward to meeting her and if any of you are local, I hope you’ll come too!

Here are the other stops on the Tour de Sweet – be sure to check them out! 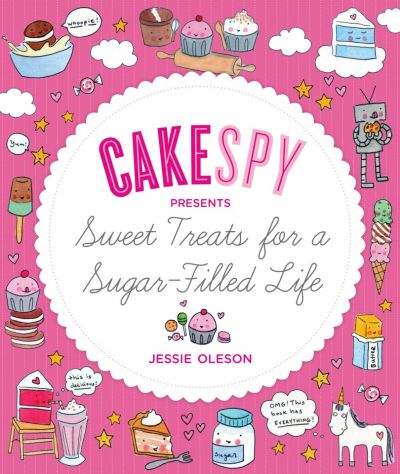 For the brownie layer:

For the blondie layer: