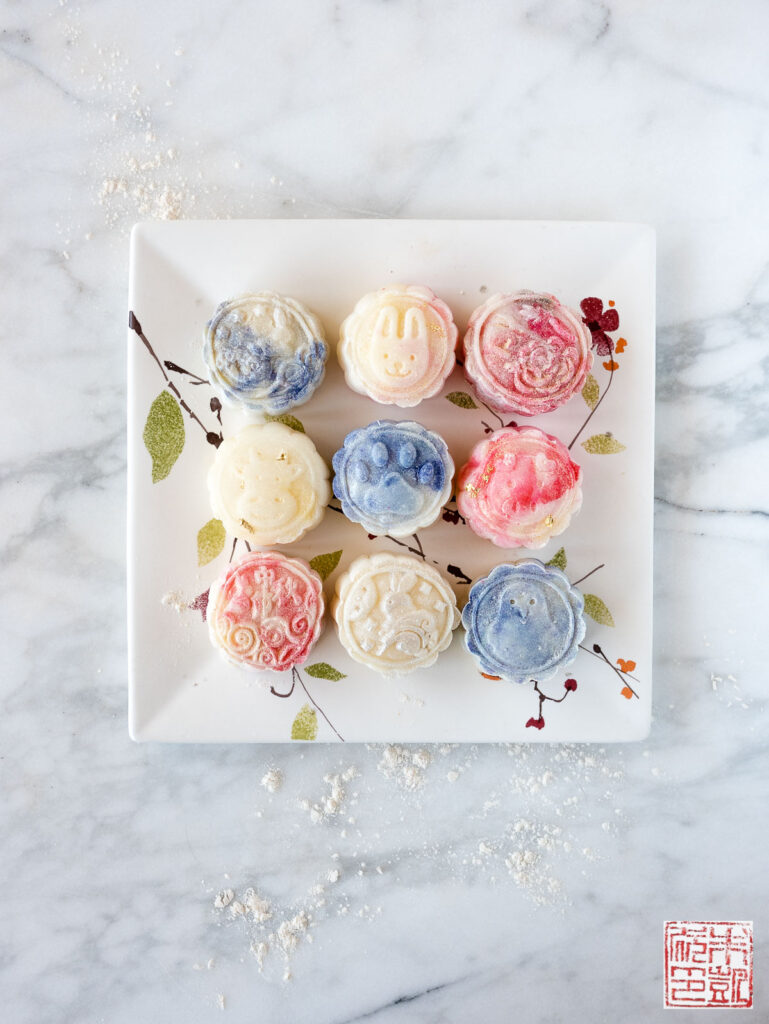 It’s Mid-Autumn Festival on September 13, and I made homemade snow skin mooncakes for the first time! This is the very first time I’ve ever made mooncakes to celebrate this holiday, so I’m very excited at how they turned out!

The traditional Chinese mooncakes, the ones I saw in the bakeries and ate as a kid, are baked and have a golden brown, chewy crust, and a filling of lotus seed paste and a whole salted duck egg yolk, which represents the full moon. I’ll be honest, this was a bit of an acquired taste for me. It’s sweet and salty at the same time, and very rich. However you’re not supposed to eat one by yourself; mooncakes are meant to sliced into wedges and shared with your family, as a celebration of togetherness. 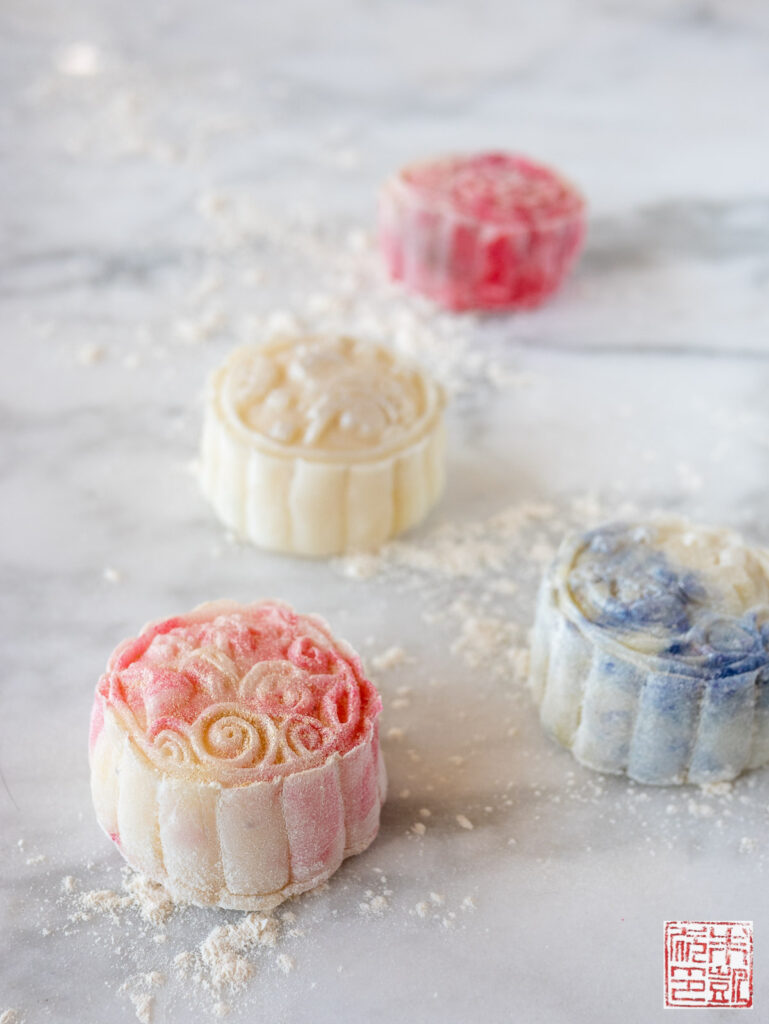 When I was little, this seemed like the only kind of mooncake around; basically this was what mooncake was. However, in recent years Asian bakeries have realized the creative potential in modernizing mooncakes, and the market has virtually exploded, with a nearly endless variety of flavor and styles available. Many of them are much more appealing to younger tastes, with fillings of ice cream, chocolate, and fruit; I kind of wish these had been around when I was little! One very popular mooncake variant is snow skin mooncake, so called because the crust is made from glutinous rice flour and has a translucent white sheen. In Chinese it’s called “bing pei”, literally ice skin. Since it’s unbaked and made with rice flour, it’s very similar to mochi. It’s also supposed to be less caloric and healthier than traditional mooncakes, but when have the holidays ever been about healthy eating? I’m just looking for the yummy desserts. 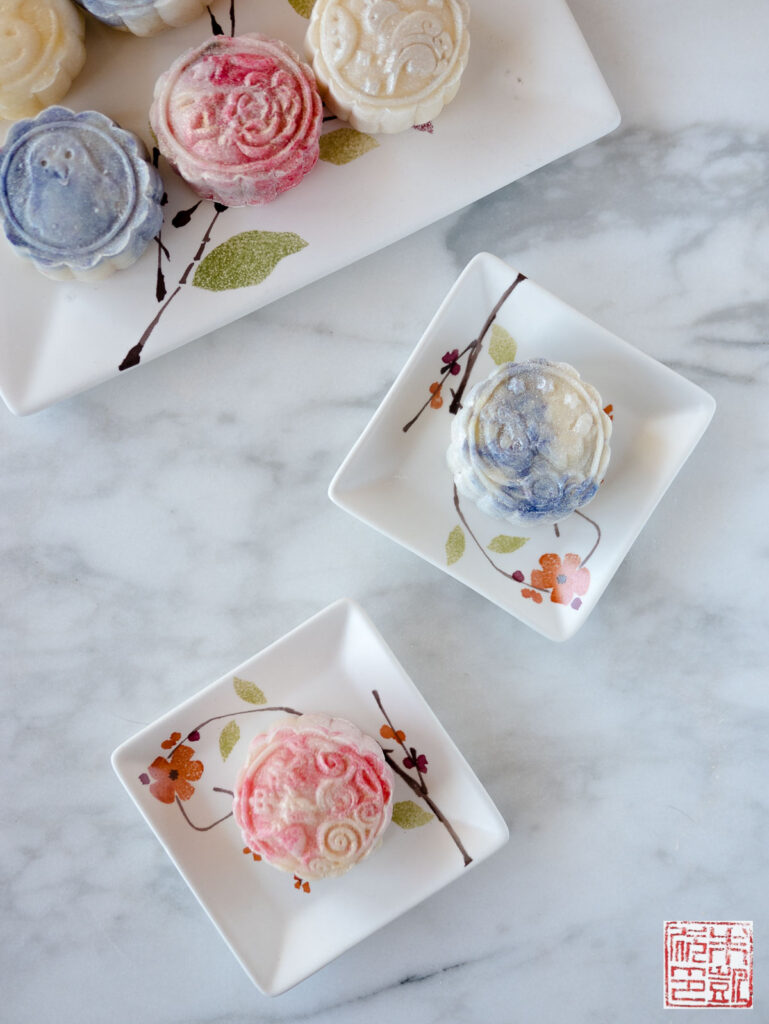 When I decided to tackle making mooncakes, I quickly realized if I made the baked kind that no one in my household might actually eat them (sorry mom and dad in Hong Kong!) so I settled on making snow skin mooncakes instead. I was inspired by the recipes and gorgeous photos on Omnivore’s Cookbook, Constellation Inspiration, and China Sichaun Food, so definitely check out those wonderful websites. 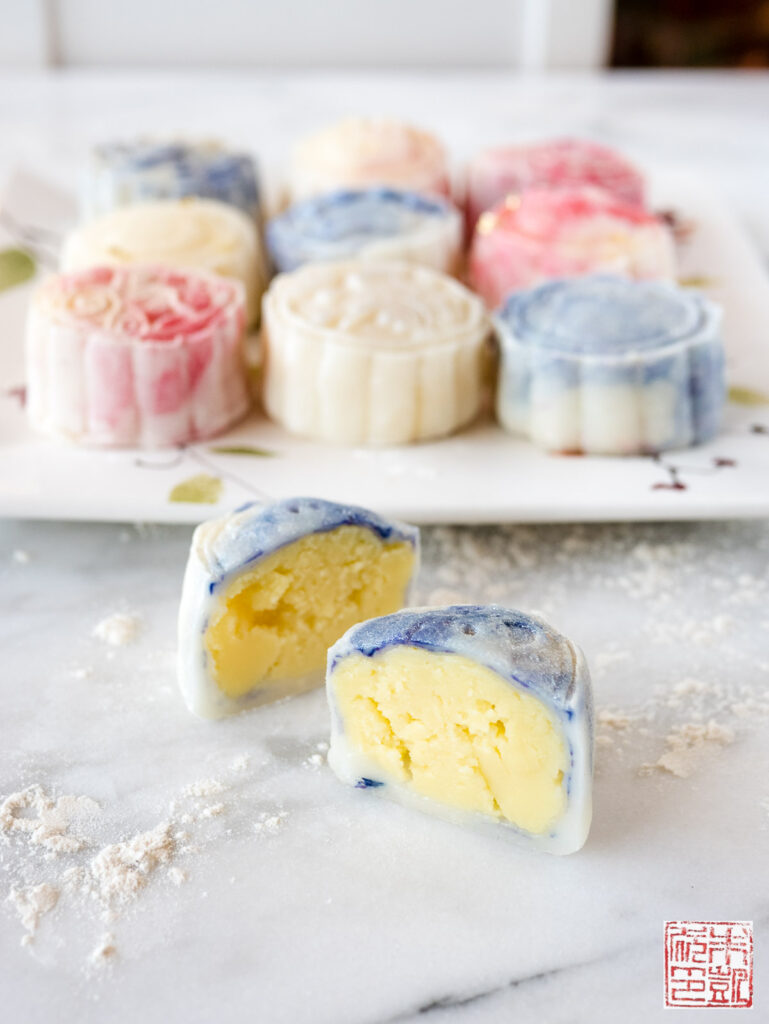 There appear to be two common recipes for making snow skin mooncakes: one that mixes pre-cooked glutinous rice flour with confectioner’s sugar and shortening, and one that requires steaming a mixture of different flours and starches. The version I made is the latter, mostly because those were the recipes I came across first! But I also discovered after more researching that the pre-cooked glutinous rice flour, called gao fen in China, is actually fairly difficult to find overseas, and several other food bloggers found that trying to cook raw glutinous rice flour at home did not yield the same results as using precooked flour from the store. This is something I might have to experiment with myself another time, but for the meantime I’m quite satisfied with the recipe I used below. Some of the ingredients may also sound esoteric, but I found them easily at my local Asian groceries, plus you can find them online, so I think this is a more accessible recipe for cooks outside of Asia. 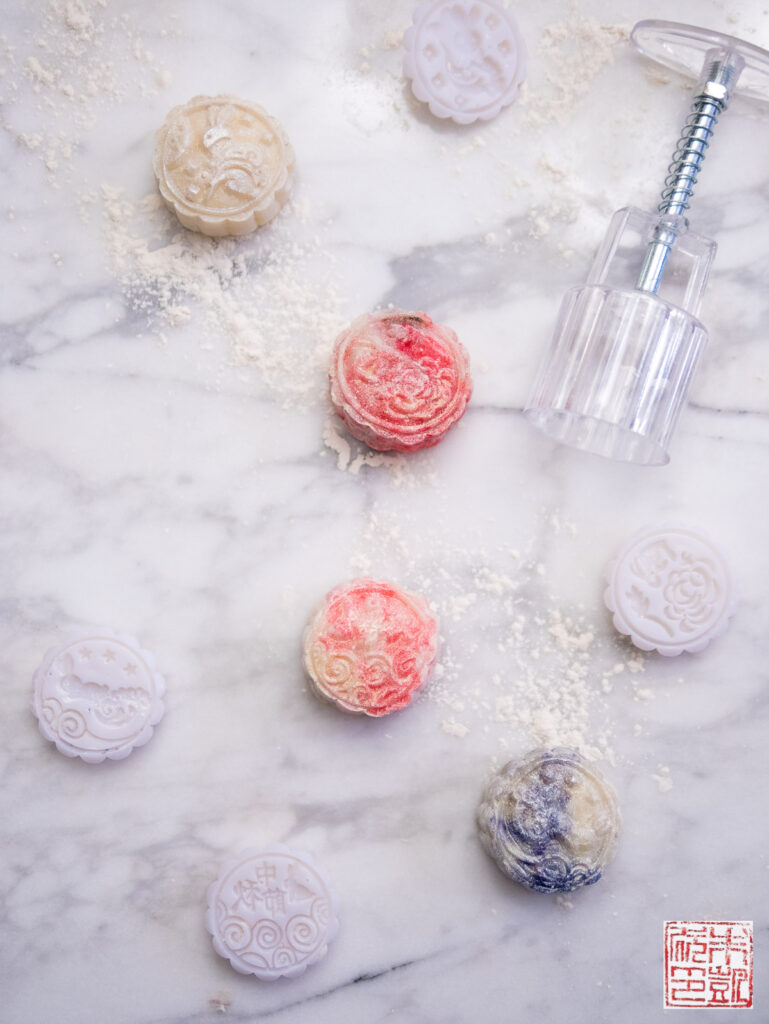 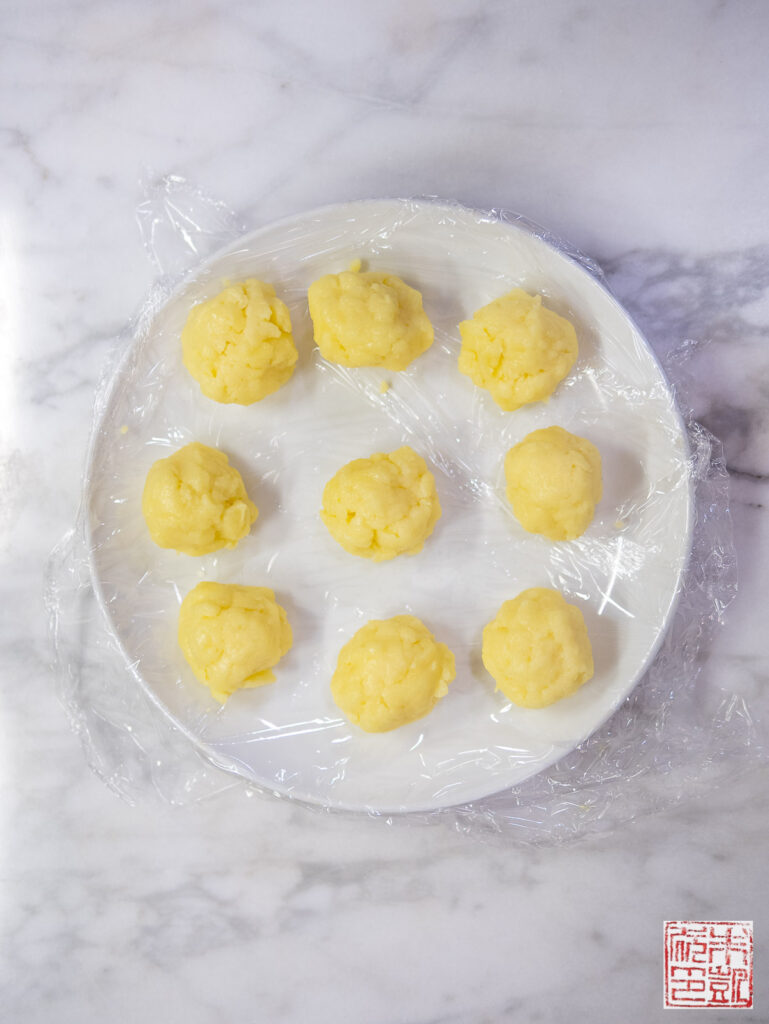 Some progress shots that might be helpful: the custard filling formed into balls, ready to go into the wrappers. Notice they’re not completely smooth, which is ok. As long as the consistency is smooth and thick, it’s good. 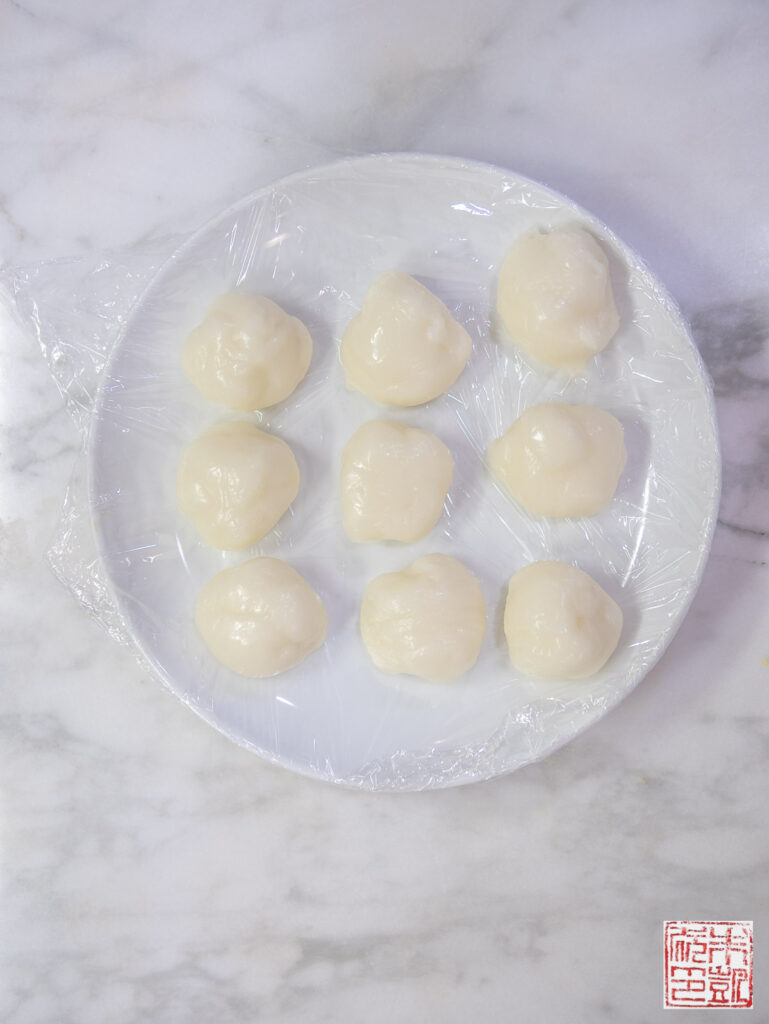 Wrapper dough divided out and formed into balls. Notice the plate is lined with plastic wrap to prevent sticking. It helps to wear gloves when forming the balls too. 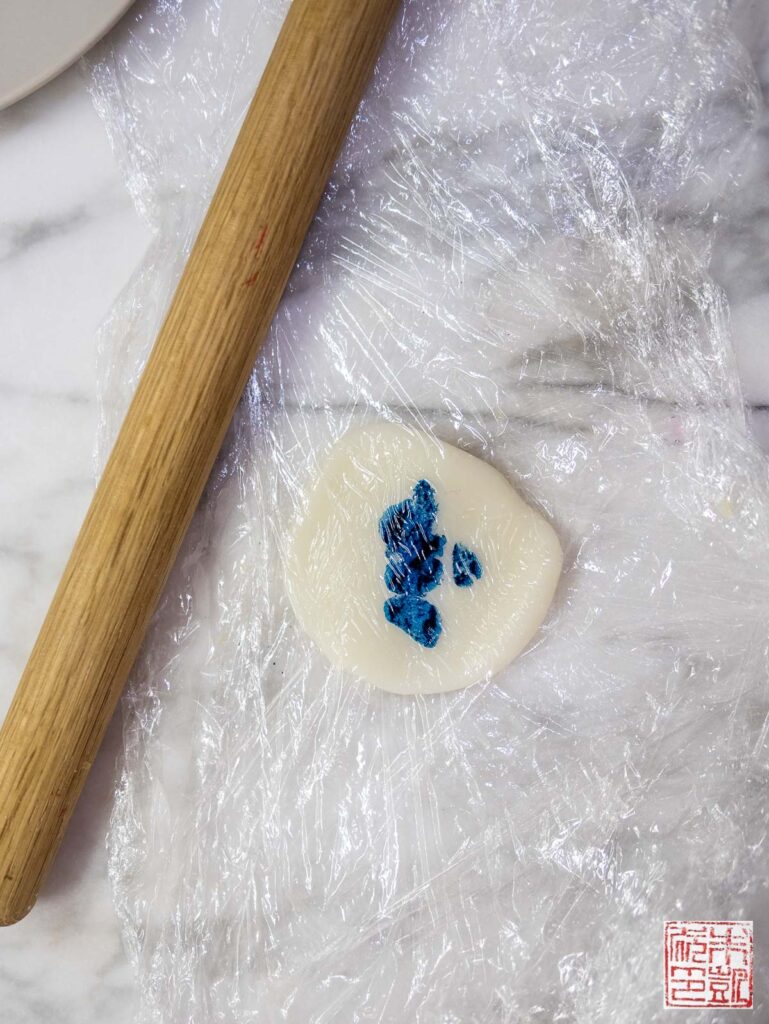 The dough rolled out between plastic. If you want to color the dough, you can add a few drops like I did here. 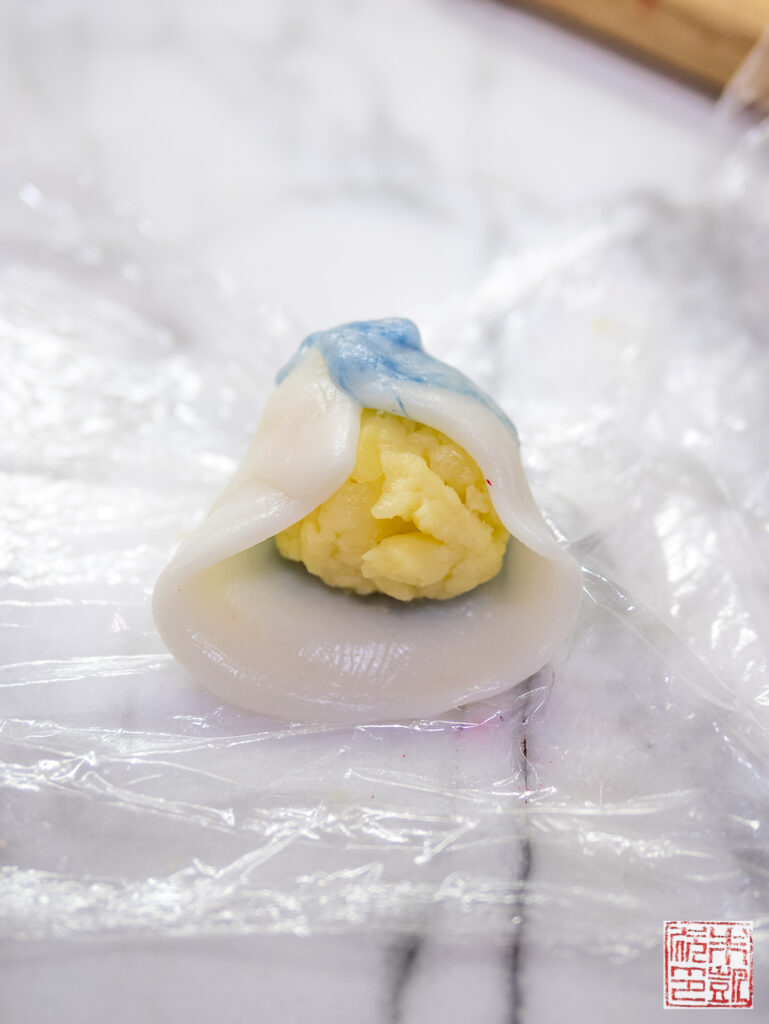 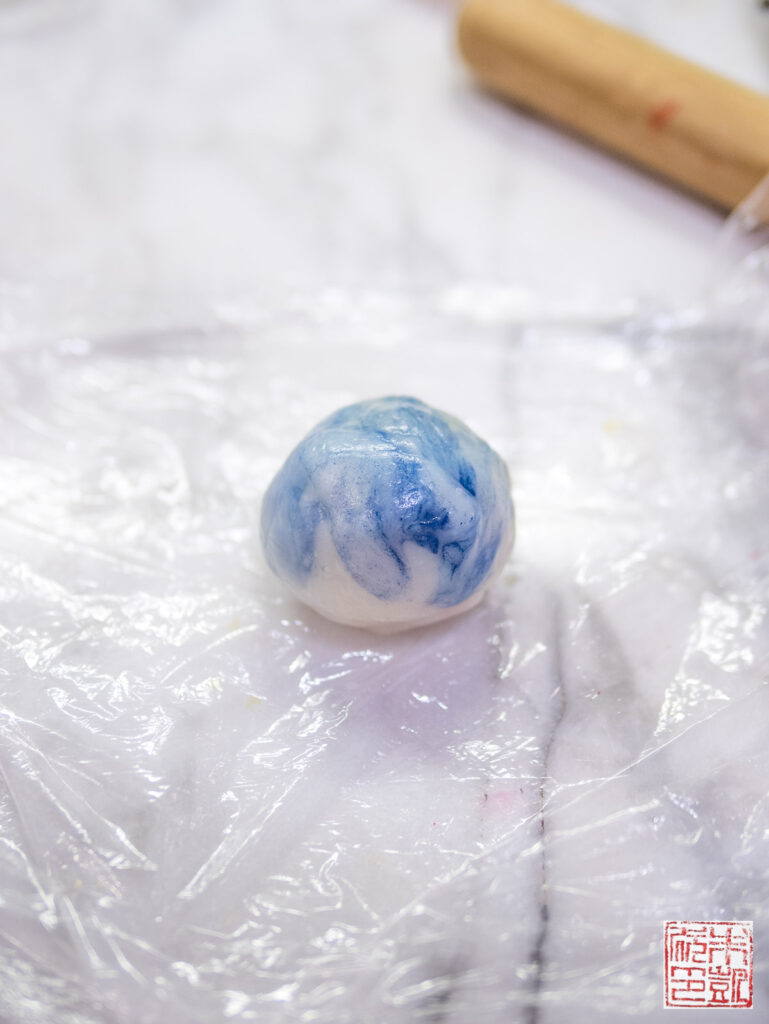 Roll the wrapper and filling gently between your hands to form a ball and seal the seams. 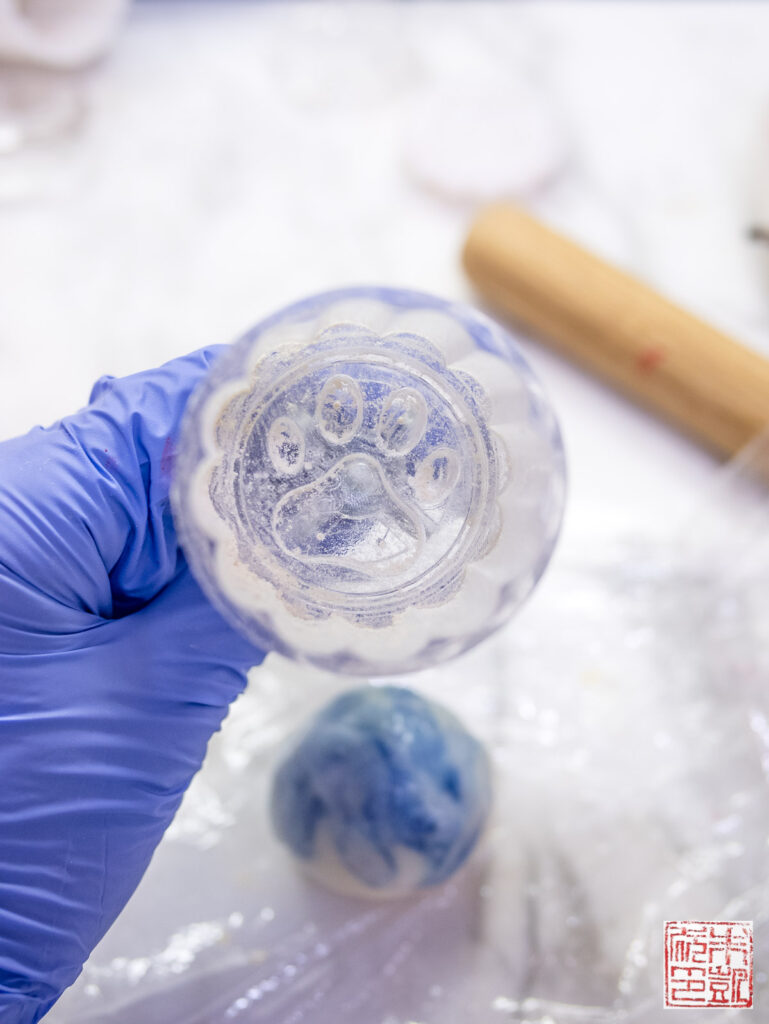 Dust the mold lightly (using a pastry brush helps you get it into all the crevices without getting too much flour in there). 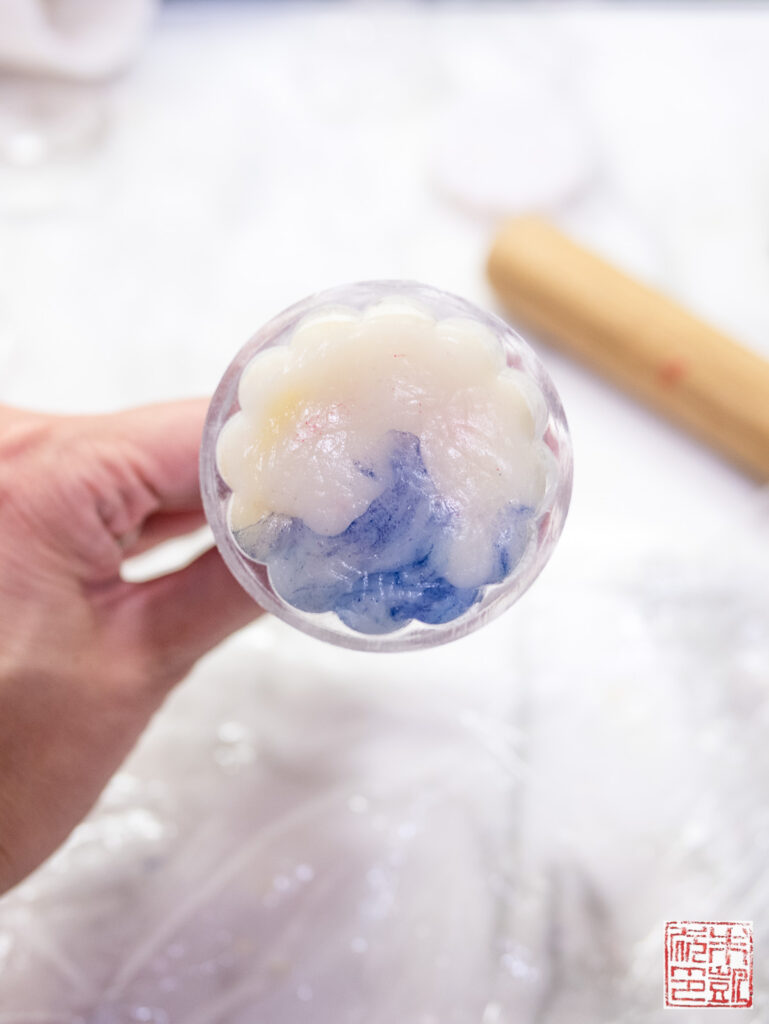 Push the mooncake ball gently into the mold, seam side facing down. 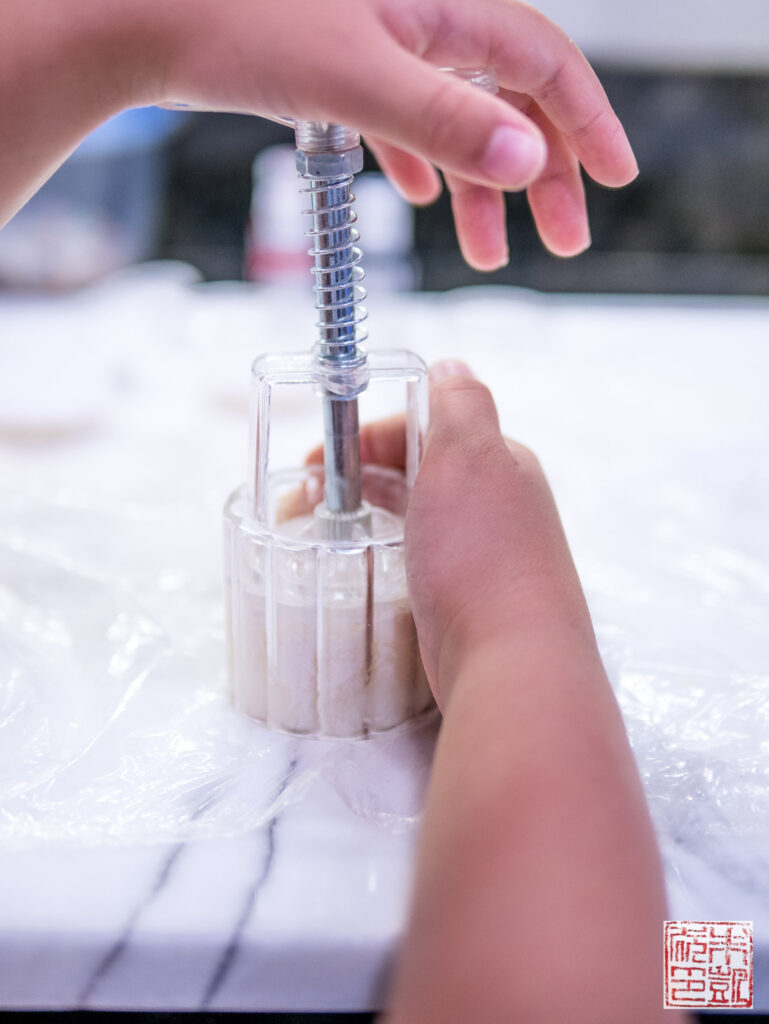 Holding the mold firmly down on the work surface, push the plunger down to stamp the design into the top of the mooncake. My daughter loved helping me with this part! 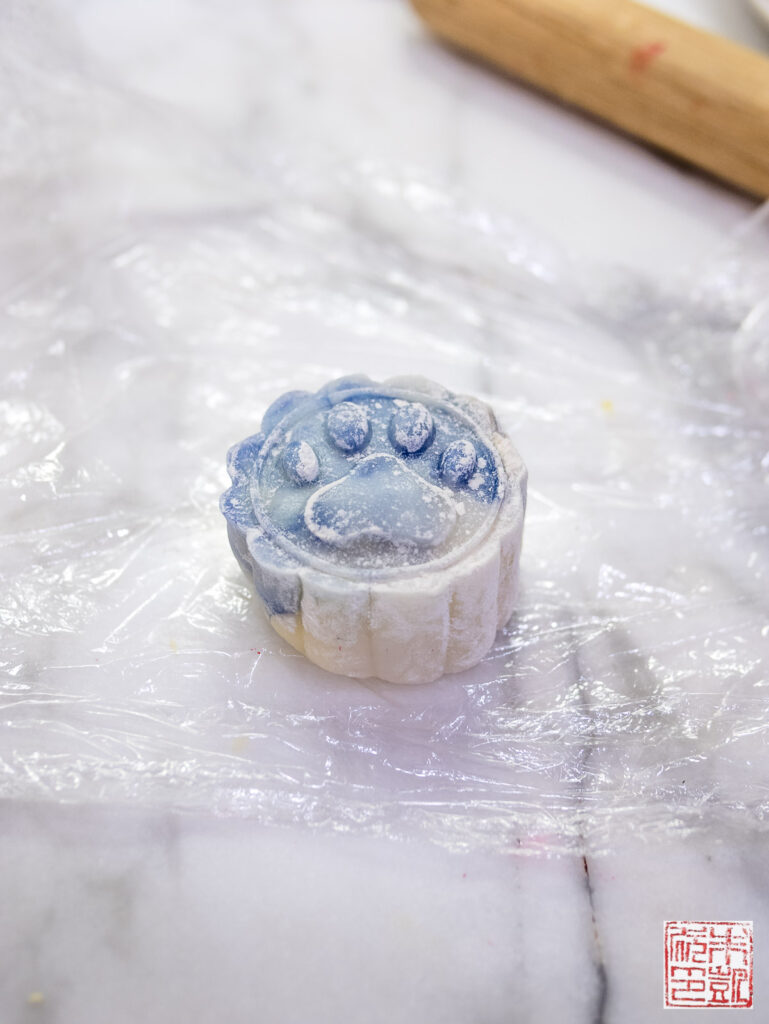 And there’s your mooncake!

So thrilled that they turned out so well. Happy Mid-Autumn Festival! 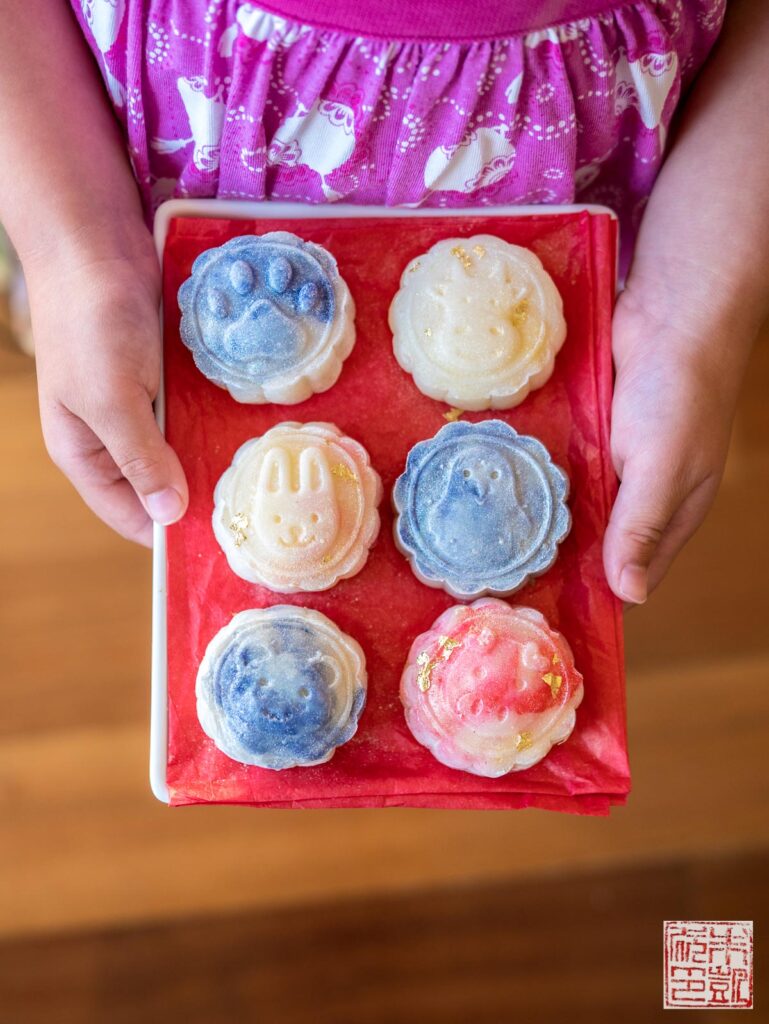