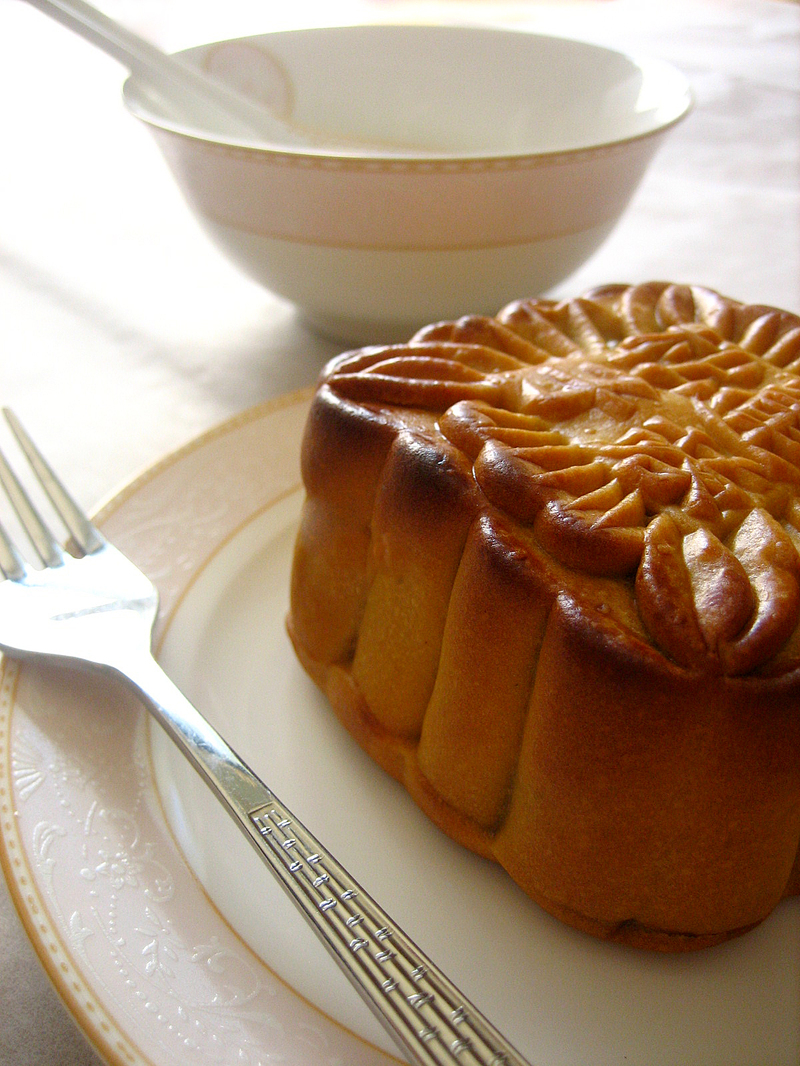 Whenever my parents come to visit from Hong Kong, I can guarantee that at least half of their suitcases will be filled with little treats and gifts for us. They’re great parents that way. When they arrived last weekend I knew that among the clothes, candies, and baked goods (yes, my mother has been known to bring boxes of custard tarts and coconut buns from my favorite HK bakeries; now if only there were a way to get dim sum across the Pacific while it’s hot) there would be several beautifully decorated boxes of mooncakes to celebrate the Mid-Autumn Festival.

At its most elegant and poetic, the Mid-Autumn Festival celebrates the time of year when the moon is at its fullest and brightest – the harvest moon, or the autumnal equinox. Traditionally, families will gather together to admire the beauty of the full moon, eating mooncakes under the night sky, with children running about carrying colorful paper lanterns like errant fireflies.

Given the mooncake’s firm entrenchment in Chinese culture, it would be impossible to get through a Mid-Autumn Festival without giving or receiving dozens of these little puck-shaped pastries. Just like red envelopes are passed out to children and subordinates at Chinese New Year, so friends and family engage in a little hot-potato pass-around of mooncakes. If you are also detecting a resemblance to that dreaded Christmas fruitcake, you are not wrong. The traditional Chinese mooncake is an acquired taste for many; for me, suffice to say that it does not fall to the level of fruitcake but neither is it among my most favorite desserts. I blame my mother for this failure of my tastebuds; I was told that as a child her father offered her five dollars (quite a significant amount at the time) to eat a mooncake, and she refused. 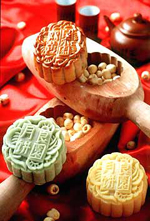 The traditional mooncake is quite dense for its size, with a soft, chewy, golden crust made of flour, sugar syrup, and lard enveloping a rich filling of lotus bean paste and a whole salted duck egg yolk to symbolize the full moon. The mooncake is formed in a wooden mold imprinted with the bakery’s insignia on top; since each bakery will have a different design for its mooncakes, those from the most reputable bakeries are highly coveted – orders for mooncakes are placed months in advance!

Because of its richness, the mooncake is typically meant to be cut into quarters and shared; if you can’t get enough of that egg yolk, many bakeries have a "super" mooncake with four egg yolks, one in each quarter. These are considered to be some of most luxurious and expensive of all mooncakes.

So the traditional mooncake is not quite to your liking? Bakeries must have realized there was a market for an improved, less calorie- and cholesterol-filled moon cake, and today the variety of mooncakes boggles the eye and wallet – some of them can hardly be called mooncakes save some tenuous similarity in form.

Substituting the expensive lotus bean paste with cheaper and sweeter fillings was a natural; you can find mooncakes with sweeter red bean pastes, fruit fillings, even ice cream. One of the most charming versions I’ve seen this year is Pappagallo’s Gelato Mooncakes, embossed with a design based on Saint-Exupery’s Le Petit Prince. Not that I recall the little prince eating mooncakes on his asteroid… 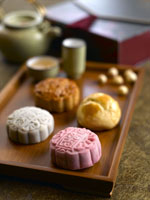 A most popular variant of the mooncake is the unbaked, or snow-skin version, using a rice-flour, mochi-style wrapper around the filling. While these mooncake require refrigeration and are much less long-lasting than their baked cousins, their much more delicate texture and adaptability to a wide range of fillings have made them a great favorite among modernists. I will admit I love the rainbow of pastel colors they come in, as well the staggering heights of creativity to which the fillings have reached in recent years – everything from truffles to green tea custard to durian to birds’ nest.

And final proof that mooncakes are adapting to the modern age: Häagen-Dazs and Starbucks have their own versions of mooncakes for Mid-Autumn Festival. The Häagen-Dazs sounds clever if not particularly moon-cakeish: The egg yolk has been replaced with a ball of mango sorbet, the filling with ice cream, and the crust with a chocolate shell, but the Starbucks coffee mooncake is one I think I’ll pass on.

I’m pleased to see that this ancient delicacy that could have been easily mothballed has instead benefited from the innovation of pastry chefs, evolving to suit ever-changing times and tastes.But however much I think I would enjoy a mooncake-shaped ice cream, I still smile when my mom uncovers those traditional glossy brown mooncakes that she brought all the way from Hong Kong. To me, they represent the real meaning of Mid-Autumn Festival and the exchanging of those little pastries: to celebrate family and being together, under the warm light of a glowing moon. 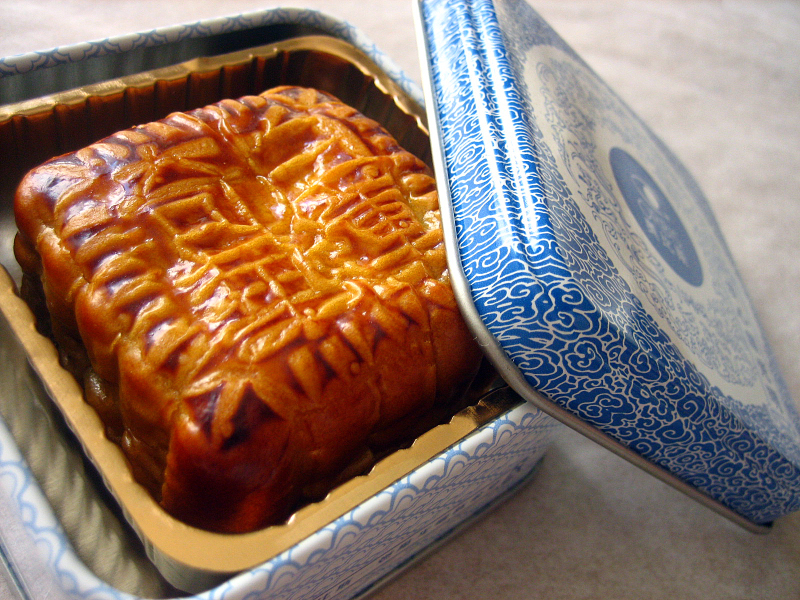 The Mid-Autumn Festival is always on the 15th day of the 8th lunar month. This year it falls on October 6th.