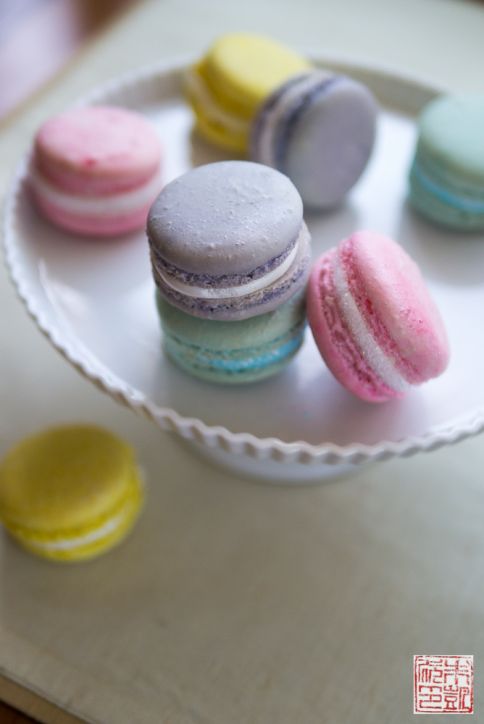 Happy almost Easter! I’m looking forward to Isabelle’s first Easter egg hunt, since she was too little last year to go hunting for eggs. She’s still too little for Easter candy, fortunately: hopefully when she’s older and finds out I kept all the chocolate bunnies and jellybeans from her she won’t hold it against me! So since we’re not stocking our place with Easter candy yet, what sweets to have for the holiday? What about macarons?

I got an invitation from Sucré, a bakery in New Orleans, to sample their famous macarons and make my own spin on them. I never say no to macarons so I thought this would be a fun challenge. With Easter on my mind, it was no surprise that after sifting through several options I ended up being inspired by Easter candy: specifically, Peeps.

Yes, Peeps, those Easter basket mainstays. It seems almost wrong walking down the Easter candy aisle without sighting those little neon-sugared marshmallow bunnies and chicks. When I was little I was confounded by how they managed to make a marshmallow that didn’t have the outer skin, but a coating of sugar sprinkles. Eventually I figured out that they weren’t true marshmallows but marshmallow creme, and, even better, that I could make it myself. Homemade peeps? It’s in my book

So when I pondering macaron possibilities I suddenly realized that I could fill them with marshmallow creme – Easter dessert found! 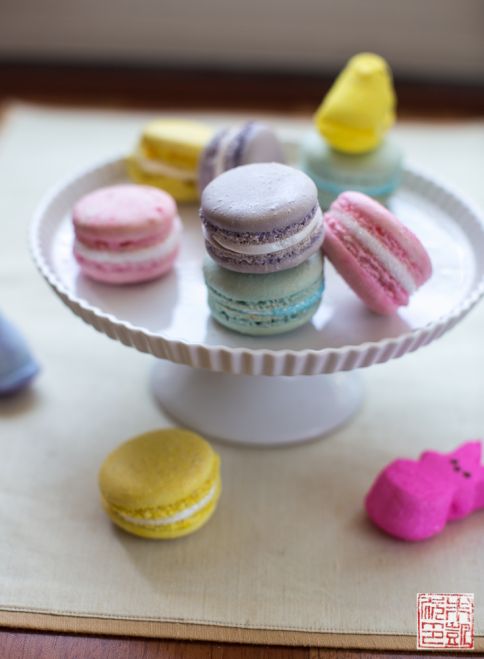 Also, fun fact: making marshmallow fluff is essentially the same as making Italian meringue macarons! They both use the Italian meringue method, which involves cooking a hot sugar syrup and pouring it into whipped egg whites. I love discovering how pastry recipes are tied together by the same universal threads. If you learn one technique, you’ve unlocked a whole trove of recipes. So if you make this recipe with Italian meringue macarons, you’ll get to see how Italian meringue is used in two different ways. One: add a little corn syrup to the mixture and it turns into gooey swirls of marshmallow creme. Two: fold it into some ground almonds and confectioners’ sugar, and it bakes up into delicate, crisp, chewy-on-the-inside macarons. How magical is pastry?

Of course, you can also make them with Chef Tariq’s recipe as given below. The French meringue style is the first way I learned to make macarons; advantages are it’s fast and simple. It’s not quite as foolproof for me as Italian meringue – I feel it’s more susceptible to differences in variations in temperature, humidity and technique, but I know it works for many people and if it works for you, great! Macarons are as individual as people: you find the recipe and the technique that works for you, and stick with it!

By Tariq Hanna, executive chef at Sucré, A Sweet Boutique, in New Orleans
Makes 12 to 24 cookies, depending on size

For Cookies:
Preheat oven to 290 degrees. Sieve together almond flour/sugar mixture and ½ cup
sugar. Set aside. Whisk egg whites and food color together with 1 ¾ tablespoons sugar on medium speed until very stiff. Fold dry ingredients into egg white mixture. Transfer to a pastry bag fitted with a plain nozzle. Pipe small disks on a baking sheet lined
with parchment paper. Bake 10 – 15 minutes. (best with door closed for the first 4 minutes and open for the remaining 10. If the cookies are too dry reduce cooking time.) Remove from oven, and cool.

Swirl a thin layer of filling onto the bottom of a cooled cookie, and top with another cookie. 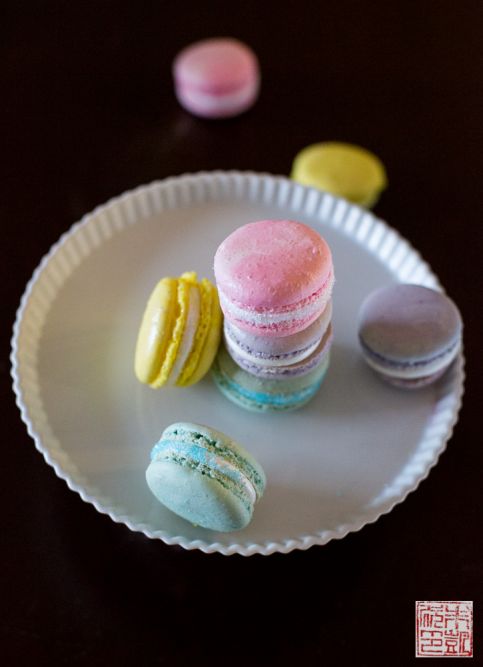 The Italian meringue method seems more complicated, but once you’ve done it a few times it hardly takes any extra time. And the consistent results make it worth the few extra steps for me. After piping the meringue into the macarons, I dusted them with sparkling sugar, just like Peeps. The crunch of the sugar along with the sticky gooeyness of the marshmallow creme is totally reminiscent of the candy, but better. It works amazingly well as a macaron filling – I’m surprised I didn’t think of it sooner.

If you like these macarons, consider voting on it at Sucre’s site. Here are the other participants in the challenge:

Happy Easter to all! 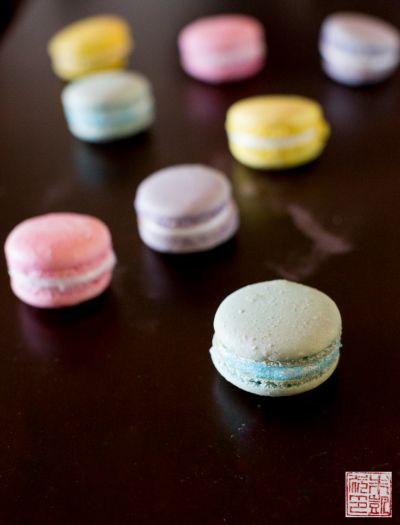 For the marshmallow creme