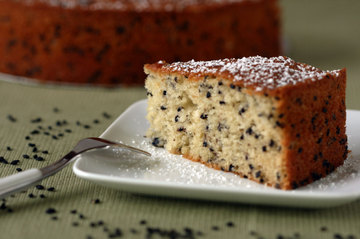 Well, I haven’t made those citron vodka-laced chocolates from Alice Medrich’s Pure Dessert

yet, but I did try another one of the inspiringly original recipes from her book. I must mention that it’s turning into one my favorite books of the year; if you remember my shortlist of baking books from a while ago (and I’m embarrassed to mention how many of those have made their way onto my bookshelf already), I certainly would put this at the top of the list. Every time I leaf through it, I find myself tempted by another creation that I must make right away.

This Sesame Seed Cake is one such recipe that beckoned to me from the beginning. It called for black sesame seeds, which I’ve rarely seen beyond a fairy-kiss sprinkling on bowls of softly mounded rice in Japanese restaurants, a sort of reverse snow-capped Mount Fuji if you will (The Japanese are such masters of visual poetry).

I last used black sesame seeds in my Black Pearl truffles, and I was eager to experiment with them again. I was also intrigued by the fact that the cake took its sesame flavor from both sesame seeds and sesame oil. Sesame oil is a staple of Asian kitchens, and I love the smoky-sweet, nutty scent that diffuses through the air when I cook with it. But I’d never used it in baking before, and I was curious what gustatory revelations awaited me from the familiar bottle of sesame oil on my shelf.

Medrich describes this as having an irresistible velvet texture, and that’s fairly on the mark. It has a tight, elegant crumb that makes it a dream to slice, and crumbles delicately on the tongue. As for the flavor, I’ll never look at my sesame oil the same again. I was used to using it as a seasoning, to add a supporting note to my dishes, but here it’s the star – and it certainly shines. It infuses the cake with its distinctive nuttiness, which combined with soft buttery-vanilla undertones make it a teatime treat both cozily familiar and thrillingly exotic. If you can’t imagine what a cake with sesame oil tastes like (and I must admit with my savory associations with the oil, I was both excited and apprehensive), do try it – your taste buds will thank you.

On the matter of toasting, Medrich also notes that sesame oil used should be toasted, and that Asian sesame oils are toasted as a matter of course, even if the label doesn’t say so. I had never even thought of that before – such are the blind spots wrought by cultural differences! To me, sesame oil was always that deep golden-brown oil in the tall cylindrical container; I had never thought about the fact that its color came from toasting the seeds, and that there might be other sesame oils made from untoasted seeds.  Be sure when you buy your oil that it says pure sesame oil; often you will find sesame/soybean oil blends on the shelves. Also, Medrich cautions against using old, possibly rancid sesame oil. I can see why, as its flavor is so prominently figured in this cake and indeed any sour notes would sound out loud and clear. However, sesame oil is one of the most stable of oils, and hardly ever goes rancid. If you can’t remember when you purchased your bottle, I might suggest buying a new one, but I wouldn’t worry overly about your oil spoiling quickly. 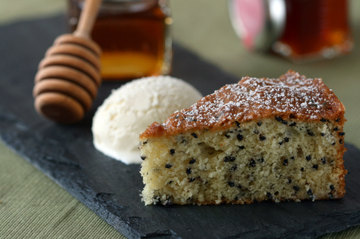 Medrich suggests serving this cake with her Heavenly Honey Ice Cream, and it’s a gorgeous pairing – as well as an excuse to use up the rest of my honey. As simple as milk and cream suffused with honey, it sings of fat bees buzzing through sunlit fields of wildflowers, of summer just gone. Of course, this is a great medium to experiment with different honeys – a softer, floral honey would go very well with the sesame cake. Just be sure to use a honey with character – you don’t want to use those bland, overly sweet mass-produced ones.

So if you’re looking for something a little different, a little exotic…give this cake a try. It’s one of the my most delicious – and beautiful – horizon-expanding experiences so far.

makes one 8-in round cake

Preheat the oven to 350 degrees F. Grease the bottom and sides of a cake pan or a springform pan – I find the springform works really well. Make sure the pan has high enough sides as the cake really rises in the oven!

Combine the flour, baking soda, baking powder, and salt together in a bowl and set aside.

Beat the eggs together in a bowl with a whisk. Add the sesame oil and vanilla and thoroughly combine.

Place the butter in the bowl of a stand mixer and beat with the paddle attachment on medium for a few minutes to soften it up. Add the sugar and beat for several more minutes until it is light-colored and fluffy.

Add in the egg mixture a little at a time while the mixer is still running, letting it slowly combine over a couple of minutes.

Stop the mixer and pour in a third of the flour mixture, and beat just until combined. Scrape down the sides as necessary.

Add half the buttermilk and beat until combined.

Scrape the batter into the prepared pan and bake in the oven for about 30-40 minutes, until the top is golden brown and a toothpick inserted into the center comes out clean.

Let the cake cool on the rack for a few minutes before unmolding. If you baked the cake in a regular cake pan, invert it onto the rack, and turn it right side up to finish cooling.

This cake will keep in an airtight container for up to 4 days.

Heat the milk in a small saucepan until it just starts to simmer. Pour it out into another bowl and let it cool completely. Otherwise it will curdle when you add the honey.

Whisk in the honey and salt.

Add in the cream and stir to combine.

Cover and chill for at least 4 hours, or overnight.

Freeze in an ice cream maker according to the manufacturer’s instructions.