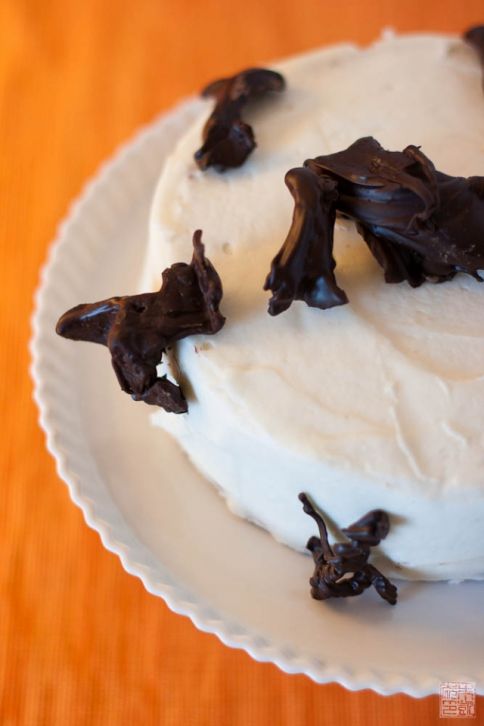 I’m working on a full-size post (with Halloween around the corner, is everyone automatically thinking of candy in “full size” and “fun size”? and how when you were a kid, you always knew which houses gave away the full size candy bars on Halloween night?), but in the meantime here’s a little update.

: the “Wedding Cake” inspired by the movie Diner. As with many of Lucky Peach articles, there’s a definite tongue-in-cheek slant; the recipe specifically warns one that this is not meant to be a multi-tier wedding cake, and that instead of the traditional lacy/delicate/elegant decorations, there are “creepy chocolate chunks” that cover the cake.

Regardless of the recipe’s rather perverse sensibilities, the actual components are quite delicious: a moist chocolate-olive oil cake layered with a apricot-grappa marmellata, and frosted with a ricotta buttercream. The chocolate decorations are actually called “chocolate spiderweb thingies” in the recipe, and as they are relatively easy to make and do look appropriately odd and misshapen, it seemed they could make some excellent Halloween cake/cupcake decorations, so that’s why I decided to post the recipe now, in case someone wants some really offbeat (but delicious) decorations for Halloween!

The recipe is quite easy to make: the cake is a variation of those blackout-style chocolate cakes, the marmellata is sweetly jammy, and the buttercream is the not-overly-sugary frosting tying it all together. It is true that none of these components might be used to construct a traditional wedding cake, but it’s tasty enough to enjoy whatever the occasion. The chocolate decorations were pretty hilarious to make too: making random shapes out of chocolate runs pretty counter to most cake decorating techniques, but it’s bizarrely satisfying to see what strange webs I pulled out of the ice.

Are you getting in the Halloween spirit yet? 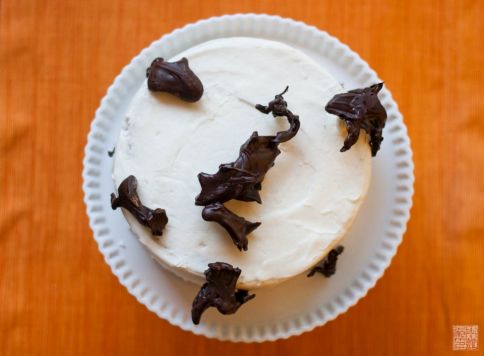 The following recipe is reprinted with permission from Lucky Peach.

For the chocolate decorations

« {Sonoma} A Trip Down the Wine Road
Pumpkin Twinkies for Halloween »