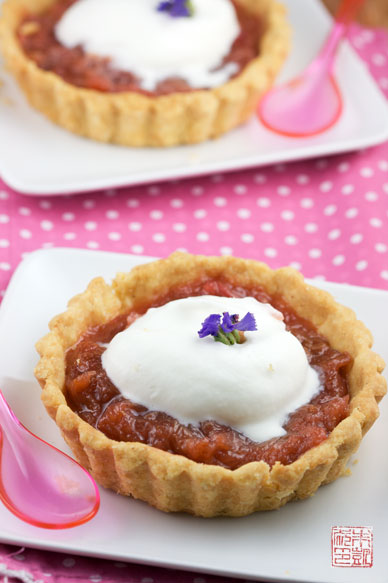 I learned something new last week – rhubarb season can persist well into summer and sometimes early fall. It’s interesting because rhubarb is so strongly tied to a single season – spring – that seeing the near-fuschia-hued stalks at the market threw me off-kilter for a moment. Hadn’t rhubarb already come and gone?

Well, apparently rhubarb can keep going long after the stirrings of spring. I apologize for those readers who already knew this fact about the “pie plant”, but that’s the great thing about the world of food, isn’t it: there’s always something new to learn.

This discovery of rhubarb’s extended season was also of great interest to The Husband, who is a fan of rhubarb in a big way. I’m going to quote his explanation of why he loves it so much: “It makes my mouth go crazy.” I think he was meant to be a foodie – a perfectly succinct explanation of what rhubarb does to him! He loves all things mouth-puckeringly tart, and the first time I made him a strawberry rhubarb tart he kept asking when we could have it again.

, and she even had a gloriously simple-sounding recipe – Rhubarb Tarts in a Corn Flour Crust. Essentially rhubarb puree poured into a golden corn flour tart crust, it sounded like an intriguing blend of texture and flavor. 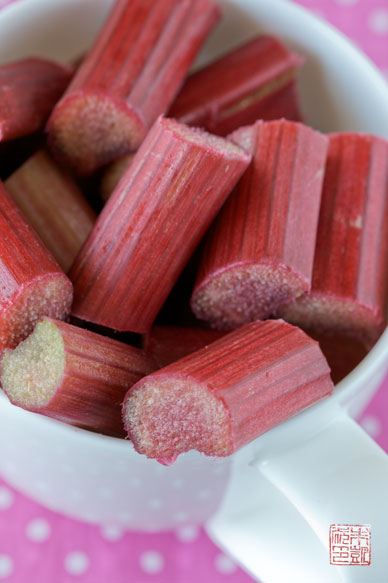 While fans of tartness like my husband might love eating rhubarb raw (I could never!), it’s customary to cook rhubarb to bring out its sweeter, dessert-ready side. Chopped up rhubarb in a saucepan, sprinkled with sugar, flecked with orange zest and dusted with cinnamon, combines into a rosy red mixture that surprisingly hints of fall. Madison suggests using maple or brown sugar, which would give the puree even more of an autumnal feel. At the same time, the puree is served in the tart crust chilled, which gives it a clean, refreshing quality and enhances the cooling tartness of the rhubarb. I knew this was a keeper when I was spooning it out of the bowl before I even finished baking the tart crusts!

The tart crust is a wonderful complement to the rhubarb: crunchy and just a little coarse-grained from the corn flour, not too sweet, a perfect neutral-but-not-bland-base for the silky puree. Corn flour is a more finely ground version of cornmeal or polenta; if you can’t find it at your store, semolina also works.

The one warning about this crust is that it’s very delicate to work with: Madison’s note in the recipe about not making the crusts too thin should be heeded. My first batch of tart crusts flaked apart as I tried to remove them from the tins: they were amazingly flaky, but a little too much, I guess! I’ve found Madison’s tart crust recipes in the book to be surprisingly easy to put together and yield superbly flaky results, but most of them are more of a pie crust-style rather than French short pastry-style, meaning that they will be more delicate to manipulate. However, the results are surely worth it: the crust crumbles so meltingly in the mouth, as if it was holding together just enough to survive the journey to your lips.

Served with a scooped-from-clouds dollop of whipped cream, this rhubarb tart was unexpectedly, an ideal dessert to bridge the waning days of summer and the first whispers of fall. If you’ve any rhubarb available around you, I urge you to try it. Otherwise, it’ll be waiting for you when spring comes around again! 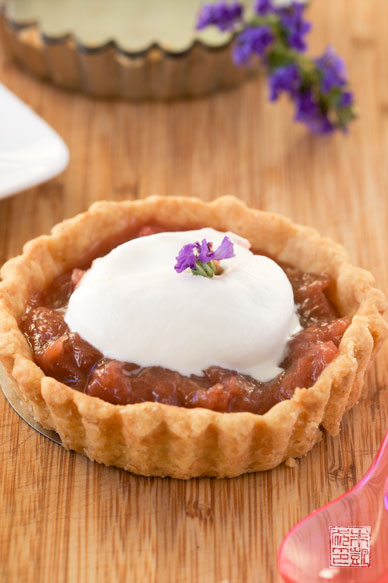 Wash and trim off the ends of the rhubarb stalks. Chop into 1 inch chunks.

Cook over medium heat until the rhubarb has broken down into a rough puree, about 20 minutes. It should not have totally liquefied – it should have a thready appearance.

Scoop into a bowl and chill in refrigerator while you are making tart crust.

Combine the two flours, salt, and sugar in a food processor and pulse a few times to combine.

Add butter and process until small, pea-size crumbs form – it should not form one solid dough yet.

Mix egg yolk, vinegar, and vanilla together and pour over the mixture in the food processor.

Process just until the dough starts to come together. Turn out dough onto a clean surface and press together with your hands.

Divide dough into six pieces. Press each piece into a 4-in individual tart pan, fitting the dough to the bottom and sides. Do not press the dough too thin.

Chill tart pans in the refrigerator while you preheat the oven to 375 degrees F.

Line each tart shell with foil and fill with pie weights or dried beans. Place pans on a flat sheet pan and bake for 15 minutes, rotating once.

Remove shells from oven and reduce heat to 350 degrees F. Remove pie weights and foil from tart pans and bake shells for another 5 to 10 minutes, until shells are golden and set.

Remove from oven and let cool on wire rack before removing from tart pans.