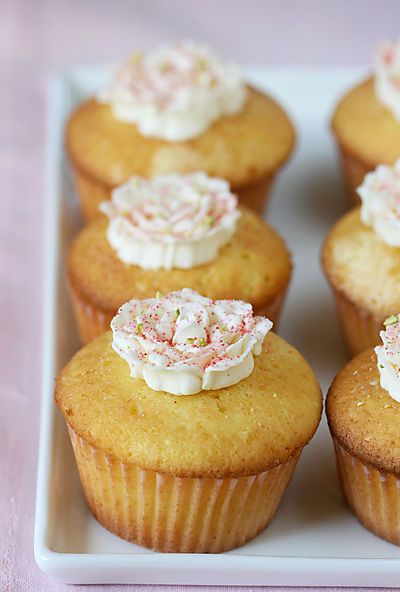 When the lovely Fanny of Foodbeam announced Cupcakes as the theme for Sugar High Friday, I did a little jump for joy. San Francisco feels like cupcake central sometimes – there's at least five cupcake-dedicated stores in the city, and dozens more bakeries that carry these bites of bliss in their lineup. Two more cupcake stores have also opened in the last couple weeks; dare I say that San Francisco denizens' adoration of the cupcake is still on the rise?

Even though I enjoy challenging myself with expanding my pastry repertoire, there's something just uninhibitedly appealing about cupcakes. They are simple to make, yet the variations are endless. In foodie-paradise San Francisco, you can be certain the the cupcakes go beyond vanilla and chocolate, to flavors from salted caramel to coconut buttermilk to lemon curd. With all these high end cupcakes around, it was with no small trepidation that I agreed to teach a cupcake class at my pastry school next March. Stay tuned for details!

In preparation for the class, I've been tweaking my favorite vanilla cupcake recipe, and wanted to do something exotic and different with it – vanilla can seem so simply down home, but it's also the perfect canvas for wild experimentation. A few hours later and I emerged from the kitchen with Vanilla Saffron Cupcakes with Rose Petal Frosting and Pistachios. 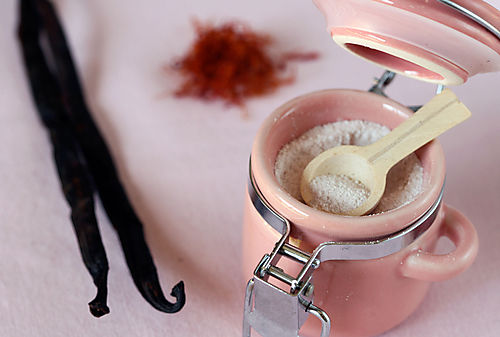 The inspiration was a jar of rose petal sugar I had picked up at the market; as finely ground as fairy dust, and intoxicatingly redolent of roses. The price for the sugar makes it rather dear, and probably not the most economical ingredient for tossing into batter. However, sprinkled on top of a cake, or cookie, will lend your baked goods its floral, delicate quality. I imagine you could also make your own rose petal by placing a few (unsprayed) rose petals in a jar of sugar for a few weeks.

My vanilla cupcake falls on the ethereally light, just-shy-of-angel-food-cake side: its uses egg whites to lighten the texture, and also allows the vanilla flavor to come through. Combined with saffron's spicy earthiness to balance out the pure sweetness of the vanilla makes for a intriguingly different cupcake. Saffron, of course, is also what gives the cupcakes their sunny yellow hue. When I was steeping the saffron in the milk, I watched the tendrils of yellow color unfurling from the saffron strands, permeating their way into the steaming whiteness of the milk. I felt like an apothecary concocting some ancient elixir with rare ingredients – already this recipe was taking me away to strange and unfamiliar climes!

I topped off the cupcakes with a rosewater buttercream – it seemed only appropriate to fashion some roses with the frosting. Unfortunately, the only petal tip I had on hand was a small one; if I could do it again, I might have made mini-cupcakes so that the roses would cover more of the surface and look even more like a blooming garden. Nevertheless, I thought it turned out fairly nicely, especially once I sprinkled the flowers with tinted rose petal sugar and bits of pistachio. 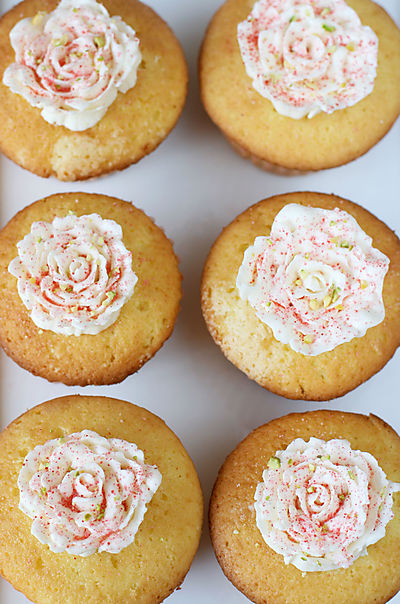 When I take a bite, I'm transported to a hot, dusty, bazaar, filled with the scent of oranges and dates, the sounds of odd-plumaged birds and sleepy camels, and water flowing from blue-tiled fountains. The sun is setting over the desert, and in few hours the sky will be endless blue velvet, punctuated with hard, white stars.

Not bad for a cupcake, wouldn't you say?

Thanks again to Fanny for a great Sugar High Friday. And as a last announcement, I'm the next baker to take up the SHF torch! Be sure to come back here in October for my Sugar High Friday theme! 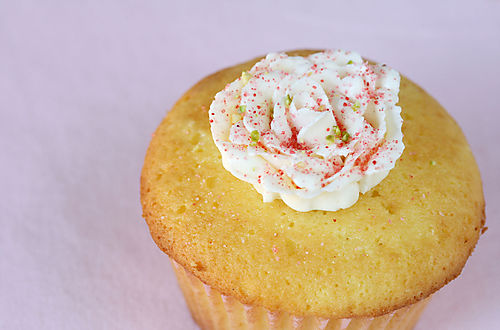 Sift flour, baking powder, and salt into a bowl and set aside.

Combine milk and saffron in a small saucepan and bring to a simmer on stove over medium heat. Remove from heat and let cool while you do the next steps.

Combine sugar  and butter in a stand mixer. Cream on medium speed for several minutes until light and fluffy.

Add the flour mixture and milk mixture to the mixer in alternating additions, starting and ending with the flour. Combine thoroughly between each addition. After you add the last of the flour mixture, add the vanilla extract and mix just to combine.

Divide batter among cupcake cups. Bake in oven for 15 to 18 minutes, until a skewer inserted into the center comes out clean and the tops spring back to the touch.

adapted from Dorie Greenspan's Baking From My Home to Yours

Combine the sugar and egg whites in a medium heatproof bowl and place over a pan of simmering water.

Switch to the paddle attachment and with the speed on low, add the butter a few pieces at a time, beating until smooth.

When all the butter has been added, beat the buttercream on medium-high speed for about 6-10 minutes until it is very thick and smooth.

Add in the rosewater and beat until combined. Add in the vanilla.

The buttercream is ready to be used. Place a piece of plastic wrap against the surface until you are ready to use it to prevent it from drying out.