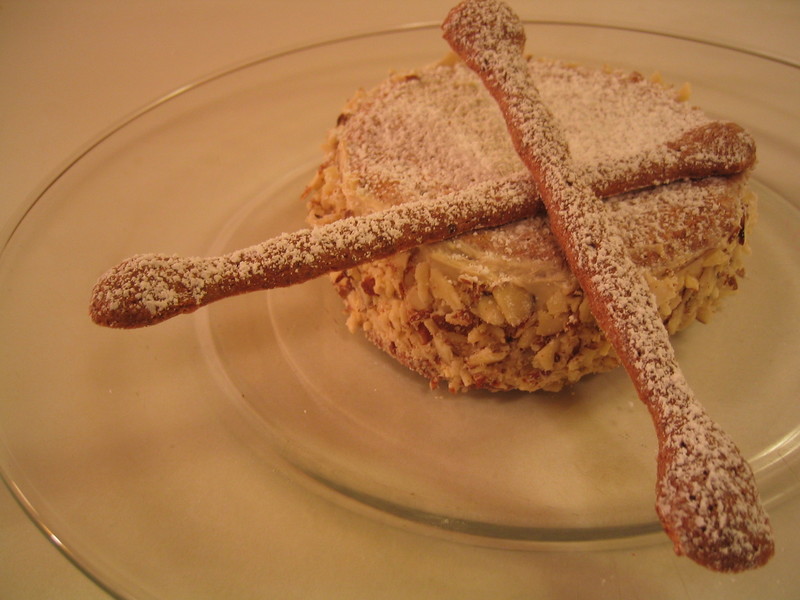 Since I had some coffee buttercream left over from the opera cake, I decided to make another one of my favorites from pastry class, the succés meringue cake.  This is another very traditional French dessert that is quite outrageously scrumptious!  It is really a variation of the dacquoise, which is several layers of crisp baked meringue disks sandwiching a buttercream filling, usually hazelnut-flavored.  The succés uses coffee buttercream instead of hazelnut, giving it a bit more of a sophisticated bite.  I decided to make my cake individual-sized, so each one has three little meringue disks, two layers of buttercream, and is covered with almonds.

I like this dessert a lot.  The contrast between the thin, crispy meringue disks and the smooth, rich buttercream makes it seem very light and refreshing, not heavy at all.  It’s also fun to pipe out the meringue batter into circles and make funny shapes with the remainders – I did some decorations for the cake.

There is another well-known version of the dacquoise called the Concorde, which was created by the famous French pâtissier Gaston Lenôtre in honor of the Place de la Concorde in Paris (the plaza with the obelisk in the center).  This is a visually intriging dessert: it is made of chocolate meringue disks alternated with chocolate buttercream, and then entirely covered with little chocolate meringue rods and cylinders.  They look like little hedgehogs to me! 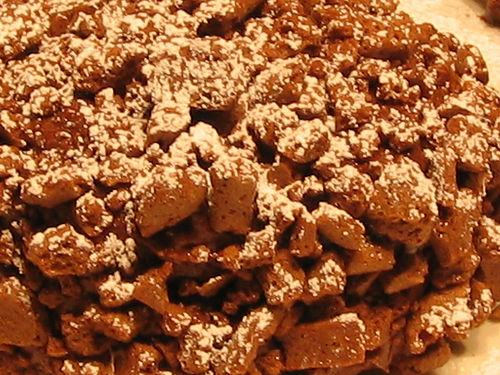