One of my pastry goals for 2015 is to start making more Asian pastries. I grew up poring over the Betty Crocker and Better Homes and Gardens cookbooks on my mom’s shelf, but I also remember the red bean and sesame-filled buns, flaky egg custard tarts, and fluffy breads from the Chinese bakeries and dim sum restaurants we would frequent on the weekends. For years I’ve meant to try my hand making these pastries myself, and this year I’m giving myself no more excuses. So here we go – I hope you enjoy this new side of Dessert First!

My first recipe is a true classic of Chinese bakeries: Milk bread, sometimes called Hokkaido milk bread in deference to its origin. This bread has been very popular on Asian food blogs and has been slowly making its way through English language food blogs. I’ve had this wonderfully soft, fluffy bread from many a Chinese bakery, yet never thought about trying to make it myself until recently. (The problem for me with many Asian pastries is that they are so inexpensive – in Hong Kong, bakeries selling milk bread and pineapple buns all for about $1 US are ubiquitous – that it often seems not worth the time or expense to replicate it at home). Milk bread is basically the softest, fluffiest white bread you can imagine – in general the preference in Asia is for very light, fluffy, pillowy yeast breads, as opposed to the chewy baguettes of France or the sturdier, coarser grain of American sandwich breads. Milk bread, with its sweet, milky flavor and, makes an ideal base for all sorts of toppings, makes a stellar toast, and is delicious enough to eat on its own without further embellishment.Whenever I go to my mom’s place, she will always have some of this in the kitchen, and I’ll find myself just snacking on a slice during the day. When’s the last time you did that with Wonder bread? 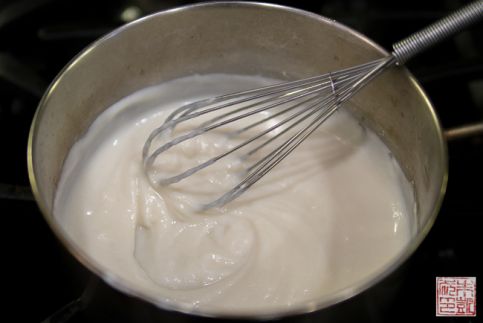 The other reason that milk bread has fascinated me for so long is that it is a prime example of an Asian baking technique called the tangzhong method. This method refers to adding a roux of flour and water (or milk) to your yeast bread mixture, which helps make it lighter and fluffier when it’s baked. The tangzhong method is credited as originating in Japan, but it became widely known to home cooks with the publication of 65°C Bread Doctor, a cookbook written in Chinese by Yvonne Chen in 2007. The 65°C refers to the fact that at 65 degrees C (149 degrees F) is when the starches in the flour gelatinize and the tangzhong comes together into a pudding-like roux.

There’s a lot of great, food-nerdy information on the internet about tangzhong and why it works. Basically, you are making a gel(or a roux) out of a portion of the flour and liquid that goes into any bread. This gel essentially locks in in the liquid throughout the entire rest of the mixing and baking process, so it doesn’t evaporate. The flour in the roux is also sealed away and will not develop gluten during the kneading process. As a result, the baked bread has a higher moisture content, and lower gluten development, which means it’s softer and lighter – and stays that way for longer. One of the more common home breadmaking laments is how quickly your perfectly-textured loaf goes hard in a couple of days. Tangzhong bread is beloved because it stays soft and fresh for longer –thanks to the extra moisture trapped inside. A great Western baking analogue is the pudding cake. Think of those recipes where you add in instant pudding to get a beautifully moist cake. Now that tangzhong method doesn’t seem that strange, does it?

See how elastic the final dough is?

There are a couple translational hurdles I had to overcome when researching and making my first loaf. One is that many of the recipes I found call for instant yeast, which is almost the same but not quite the same as the active dry yeast that I’m used to using. Active dry yeast requires activation in liquid, while instant yeast does not. Although some recipes insist the two yeasts are interchangeable, I chose to follow my own instincts from my experience and I let the active dry yeast bloom in part of the milk before adding it to the bread. 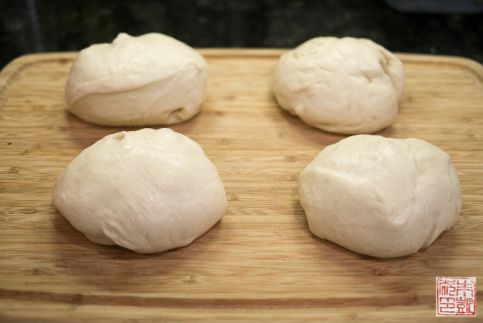 Here’s a cross-cultural observation: The reason most of the milk bread recipes I found called for instant yeast is because they make the bread in a bread machine. In many kitchens in Asia where space is at a premium (my parents live in a relatively spacious flat in Hong Kong, and their refrigerator is literally half the size of mine – daily grocery runs are a necessity for my mom!) the bread machine, not an oven, is the tool of choice for breadmaking. So most of the recipes I found for tangzhong bread call for dumping all the ingredients straight into a bread machine and pressing the button. However, a bread machine is one of the few kitchen appliances I don’t have, so I had to convert the recipes to work with active dry yeast and my stand mixer. 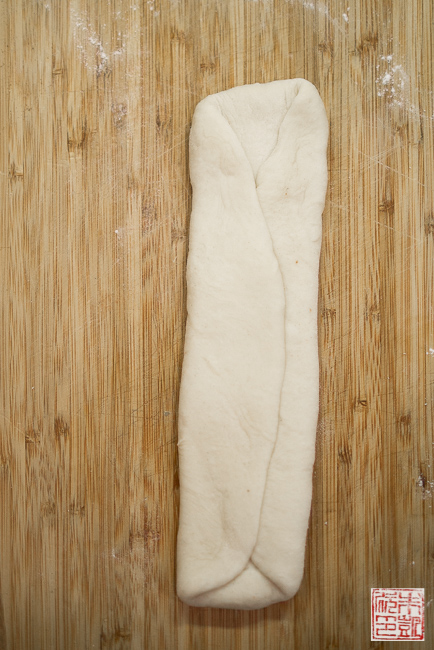 Many recipes also call for kneading the dough by hand for the best results; the part of me that went to pastry school agrees, but the part of me that’s also watching an active 2 year old toddler says the stand mixer is a perfectly wonderful and adequate substitute. Because you have to work extra hard to get the gluten developed, kneading by hand can take a while, again probably why most recipes recommend either a bread machine or a stand mixer. 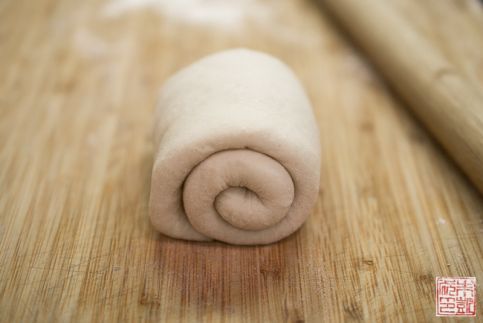 After making my first loaf of milk bread, I’ll say it’s not that tricky, even if you’re not a big bread baker (like me!) This bread is enriched with butter, milk and egg, and all that added moisture and fat make it easier to work it and more forgiving than your leaner breads. The tangzhong doesn’t noticeably change the texture of the dough – once you make it and add it in to the mixer, you can practically forget about it – but you’ll realize its presence when you see how high this bread rises in the oven!

The photos above show the traditional sequence of making four separate little rolls that you nestle into a loaf pan – this formation helps the bread rise even higher, and gives it the classic humped top and pretty swirly sides.

One of my other goals for 2015 is to start introducing Isabelle to the world of baking. I’ve been looking forward to when she would be old enough to take an interest in my kitchen activities! Here’s my little kitchen helper brushing some egg wash on top of the bread before baking: 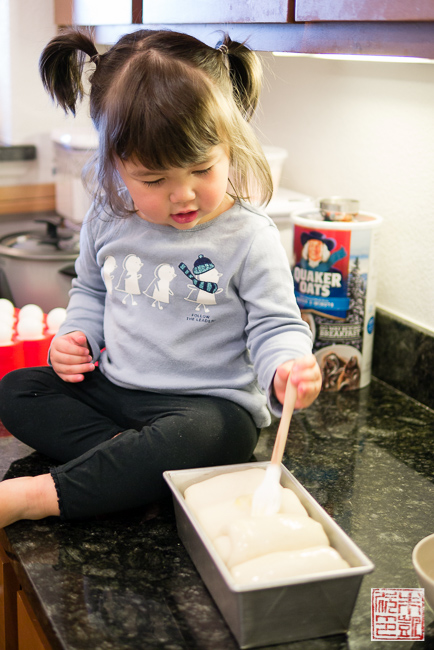 Egg wash for the bread

Out of the oven: a beautiful golden brown domed loaf with a slightly firm exterior, and a delightfully cloud-tender interior. It slices like a dream, and in fact slices have been disappearing from it with increasing frequency. Better save some for myself… 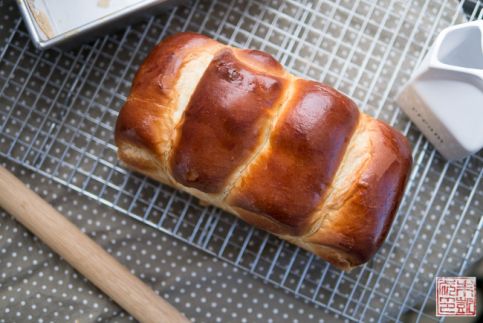 In conclusion, although the tangzhong method sounds intimidating, it is an easy, additional step that takes very little extra time to do, and it makes milk bread possible: a dreamily soft loaf that is wonderful on its own, or for almost anything else, from sandwiches to French toast. It is also a great bread for little kids – they love the lightness and sweetness, as Isabelle demonstrates below (she calls it “Isabelle bread” now!)

I’ll be exploring other Asian bakery classics throughout the year – hope you enjoyed this inaugural post! 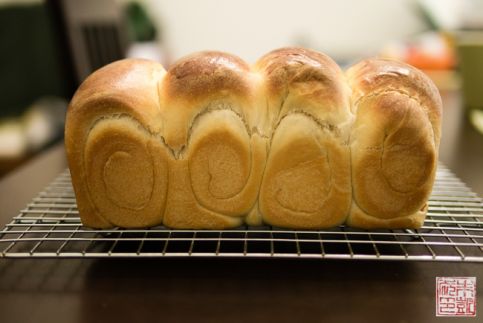