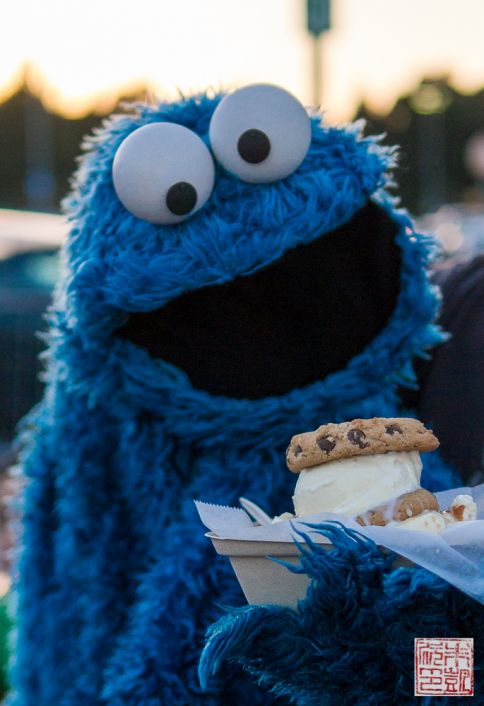 Sometimes opportunities come along that make me so happy I started this blog about baking. Case in point: I got an invitation to meet Cookie Monster and interview him a couple of weeks ago! Cookie Monster in my town! How could I pass up an opportunity to meet my very favorite Sesame Street character? Cookie Monster is a perfect example of how a simple love of sweets can get you far in life. And now that I have a baby girl who is starting to understand Sesame Street, how could I not take her to meet him?

Cookie Monster and his team were in San Francisco for a separate event and decided while they were here that they had to check out our food truck scene, with Cookie Monster showing up live and unplugged, as it were. Apparently this was the first time they’ve tried something like this, so we showed up not really sure what to expect – would there be a meet-and-greet area with handlers? Would he just pop up from behind a food truck? As it turned out, it was pretty close to the latter. We spotted a cluster of people moving around with a Cookie Monster-sized bag, and when we saw a patch of blue fur emerge, we knew we were right. 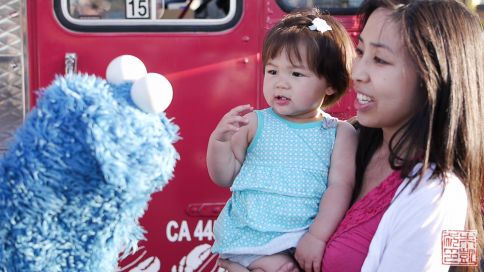 Here he is, in the fur, saying hi to Isabelle! He is shorter in real life than I imagined (like most celebrities, I guess), but his fur is as soft and fuzzy as you’d think and his googly eyes are even more googly in person (in monster?) He loves everything about food (talking about it, ordering a bunch of it from the food trucks, eating it), and he’s also really funny (I find him easily the most hilarious of all the Sesame Street characters). I had a really fun time just chatting with Cookie Monster; I didn’t expect to get so much face time with him, if you can tell from my starstruck demeanor in the videos.

A quick nota bene: the videos in this post were taken by my videographer (aka Hubby Mike) with my Panasonic GX1. There was a live band playing at the food truck gathering, so unfortunately the audio is not the best, but I think you’ll still be able to make out our conversation.

This is a first test video we did to see how things would work. Isabelle gets to meet Cookie Monster and shows him that she’s been practicing his eating technique, learns what he eats besides cookies, and if he prefers crunchy or chewy.

I will note that while Isabelle was super happy to meet Cookie Monster and wasn’t scared at all, I’m not quite sure she understood the pure awesomeness of meeting him in real life. I got the feeling that to her this might have been the same as seeing him on TV. The fact that we just got back from a Disney cruise where she met Mickey and Minnie and a bunch of other characters in person probably also reinforced the idea to her that all cartoon characters live down the street from us and we run into them all the time. Well, hopefully when she is older she will see these videos and appreciate that she got to MEET Cookie Monster! 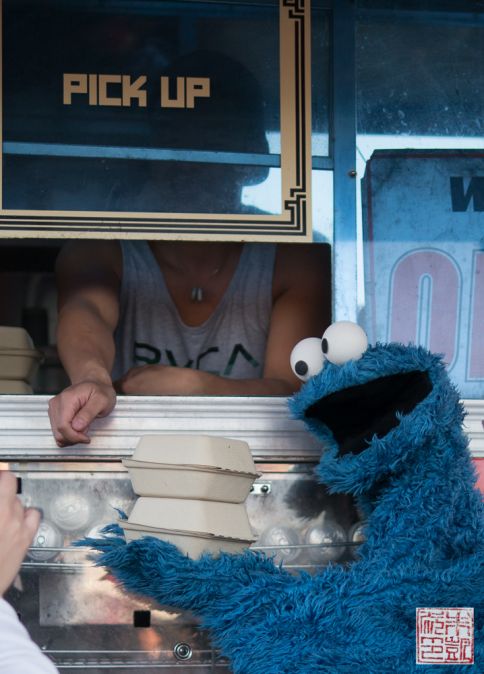 Cookie Monster decided he needed some dinner and proceeded to check out all the food trucks. Here he is investigating one of the classic choices, Chairman Bao, one of the most consistently excellent (and popular) food trucks around. Looks like he left with a double order of bao. 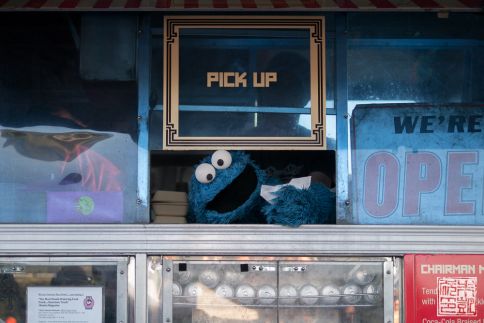 Cookie Monster also wanted to see what things were like from the other side of the window and ended up serving some food. I kind of liked the whole flash mob-like aspect of his appearance. Obviously most of the people at the food truck gathering had no idea what was going on, but as they started catching glimpses of blue fur and googly eyes, a crowd began forming and kids started running up asking for pictures.

In this second video I get to ask Cookie Monster about whether he’s going to start his own food truck, if he bakes his own cookies, and if he’s ever had a cronut. Why is there not a Cookie Monster cookie truck?

Cookie Monster and I were doing this interview while standing in line for the Frozen Kuhsterd truck. It turned out by crazy coincidence they were selling a dessert called the “Cookie Monster” – naturally Cookie Monster had to order it! He might have ordered three or four, I’m not sure.

Sadly Cookie Monster and his team were flying back to New York and Sesame Street the next day, but they said they really enjoyed the beautiful San Francisco weather and the food truck experience. The 45th season of Sesame Street will begin this September and will include new episodes of Cookie’s Crumby Pictures, one of my favorite new Sesame Street segments. If you haven’t seen any of them, you can find them on Youtube. I always thought Cookie Monster’s enduring popularity was due to the fact that his raison d’être (om nom nomming) is easily understood by even toddlers, yet he also manages to be culturally savvy enough to do things like movie satires. He’s pretty multilayered for a monster who supposedly is only about cookies.

A last goodbye to Cookie Monster. You can see Isabelle is really good at waving goodbye!

Thanks Sesame Street for giving me the chance to meet one of my childhood favorites! I’ll be keeping an eye out for that cookie truck!