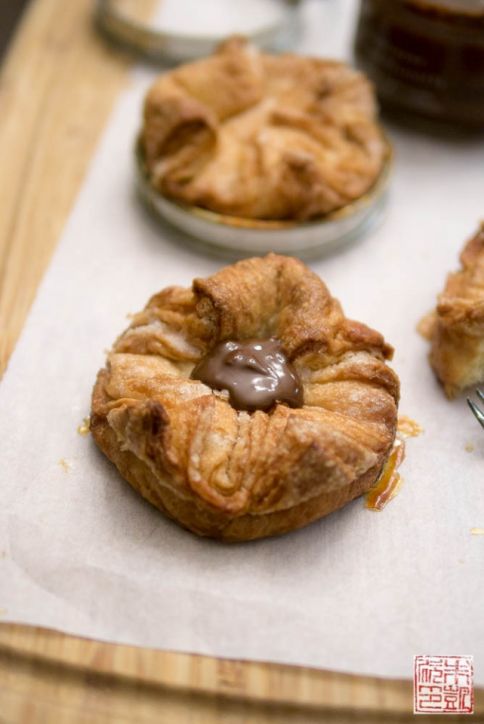 Kouign amann: this tongue-twistingly named pastry is also one of the tastiest things I have ever eaten, and seems to inspire such instant devotion wherever it pops up. Essentially an amped-up croissant with lots of extra butter and sugar added in, this pastry is not for those without a sweet tooth, or plenty of stomach space! Although kouign amann comes from France, its name is from Breton, which is a Celtic language. This pastry is a specialty of Brittany, where the Bretons settled after emigrating from Great Britain, way back in the 6th and 7th centuries. The name translates to “butter cake”; although the traditional form of kouign amann is indeed a large round “cake”, most of the ones I see today are individual-sized versions baked in small tart rings.

I’ve made croissants and other pastries before, so objectively I knew that making kouign amann shouldn’t be beyond my abilities. However, the question was whether I could make them well. I’m lucky enough to live in an area where there are not one but two stellar makers of  kouign amann. Trying to live up to these formidable examples, and knowing that rather than spending a day in the kitchen, one could just drive up to the city and quickly have a gorgeous specimen in hand, made this project a new level of intimidating. 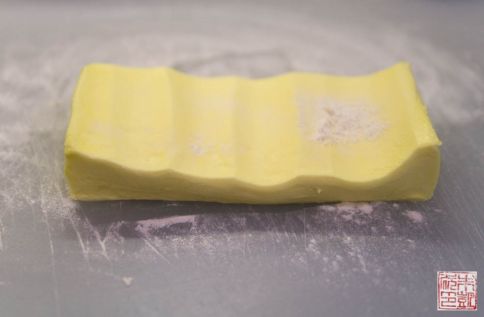 One of the big keys to success with kouign amann is the butter you use – namely, salted, high-fat butter. In fact, many kouign amann connoisseurs proclaim that proper kouign amann can’t be made without Breton salted butter. Well, for those of use not fortunate enough to dwell in France, the next best option is to use a similar quality butter.

Quick butter facts: most butters produced in the US hover around 80% butterfat. In contrast, butters in France have a minimum of 82%. Of course, the increased fat content makes for a creamier, tastier product in general, but in terms of baking it makes a surprisingly big difference, particularly in laminated pastries. More butterfat means less moisture in the butter, which helps lead to higher, flakier pastries.

For kouign amann, which uses so much butter and sugar, the butter you choose and the care you take in making the dough can spell triumph or disaster. High-fat, flavorful butter will result in a beautifully risen, delectable pastry. Also, one of the common problems encountered in making kouign amann with regular butter is that the additional moisture can cause all the sugar in the dough to liquefy, leading to the collapse of the laminated layers and resulting in a sticky, wet mess. For these reasons, using a high-fat, quality butter is paramount to kouign amann success.

Happily, these days there are several great butter options available outside of France. Look for a butterfat content of 82% or higher, and for a salted version, which is what is traditionally used for kouign amann. While I was at the Winter Fancy Food Show, I got in touch with Kerrygold Butter and they generously sent me some samples of their lovely butter for me to try. What better use than to make some super-rich kouign amann?

As you can see above, the Kerrygold butter is nicely pliable, almost right out of the refrigerator. Just a joy to work with. I had it flattened and shaped into the size I needed in moments, meaning I could return it to the refrigerator before it started melting. If the butter you choose is like a rock out of the fridge and whacking is more an exercise in frustration than supple yielding, try another brand. 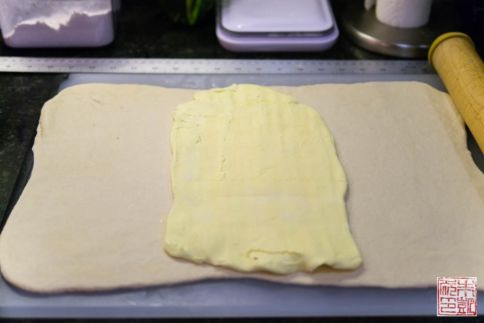 Since kouign amann dough is essentially a variant of croissant dough, similar strategies apply to the lamination process, particularly watching the temperature of the dough and butter. It’s critical to keep the butter soft but not melting; if the butter seems to be getting too soft at any time, it’s better to put the package back in the refrigerator and let it chill for a bit rather than try to rush through and end up with soggy, gluey dough.

The chilling time between turns is also important to let the dough relax so it doesn’t become an inflexible, over-glutened mass that is impossible to roll out. The dough will become a little more difficult to roll out after several turns, but it shouldn’t be shrinking like crazy after every pass of the rolling pin. Take your time and give the dough time to chill and relax. Some recipes I read said it should take about 6 hours from when you start the recipe to when you put the kouign amann in the oven, and that was about right for me.

Besides lots of butter, kouign amann also uses a lot of sugar. The traditional recipe has sugar layered into every turn of the dough. However, as I mentioned briefly earlier, one of the dangers is that all that sugar can combine with the moisture in the dough and melt. In order to avoid this, many home recipes have the sugar layered in only at the very end, to minimize sugar contact with the dough. I used this method since it’s fairly humid in my area. Most home refrigerators also have moisture inside, so be careful not to leave the finished dough in there too long. If you want to try the classic method, and layer sugar into each turn, try to make sure the butter is totally enclosed by the dough so that the sugar doesn’t directly touch the butter. The dough will act like a barrier and help keep the sugar dry for longer. 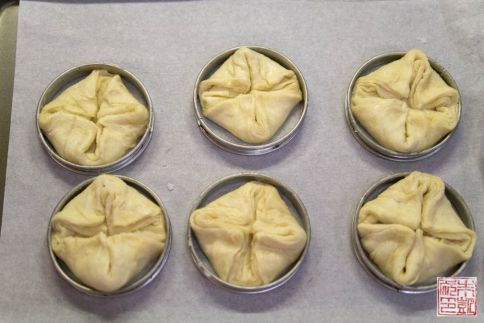 The kouign amann recipe below is taken from the kitchn’s excellent tutorial (see the step-by-step photos if you need more guidance) and from Joanne Chang’s Flour, Too

. You can bake this kouign amann in a single 9″ cake pan, but I prefer the mini size, as it allows for more of the fabulous caramelized surface, plus these pastries are so outrageously rich that a single portion should be enough for even the hungriest sweet tooth. Several kouign amann recipes adapted for home bakers suggest making them in a muffin tin instead of pastry rings, I guess under the assumption that most bakers will have a muffin tin in their equipment arsenal. I decided to make them in both so I could compare the differences.

The rings are my trusty 3 1/2″ diameter rings that I use for all my individual tarts. They are about 3/4″ high, enough to allow a nice round base to form and short enough to let the top of the kouign amann bloom out and up, popover-style. I personally prefer the rings as the dough fits in them better (you have to sort of squish the dough into the muffin tin cups) and the pastry seem to keep their shape better. The open bottom also lets the bottoms of the kouign brown and caramelize better. I definitely liked the appearance of ring-formed kouign amann better. 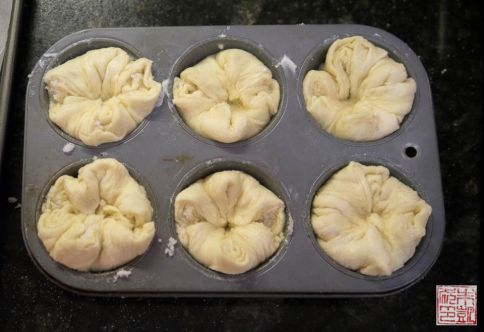 Kouign amann in a muffin tin. This is an entirely acceptable method so if you don’t have any pastry rings go ahead an use this. (Although if you’re a mini-tartlet fan like me, buying a bunch of pastry rings are a very easily-justified purchase). You can see I had to push the dough around to make it fit into the cups, and thus they bake up a little more irregular than in the rings. Also, be aware that you will most likely get butter drips as the dough bakes, so to avoid burning butter on the bottom of your oven, be sure to place a baking sheet beneath the tin to catch any drops. The kouign amann will not caramelize as fully or quickly in the muffin tin as in the rings, so the baking time may be a few minutes longer. 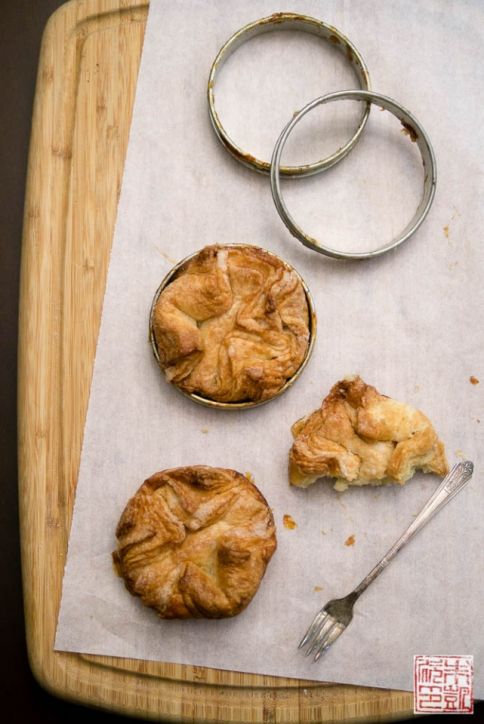 Kouign amann fresh from the oven, golden brown, caramel-crisp on the outside, fluffy-flaky-sugary-gooey on the inside. The delight of a kouign amann is in the contrast of the delicate, crunchy crust and the sweet, buttery interior. It’s like a croissant already slathered with extra butter, and laced with caramel. The salt helps cut through the intense richness and adds the last bit of addictiveness. Another reason I liked the rings better than the tins is that it was easier to unmold the kouign amann. Unlike some other pastries, you have to unmold the kouign amann before they cool down or else the caramelized sugar will harden and make it very difficult to unmold within ruining the kouign amann. I found this especially true for the kouign amann made in the muffin tin, but the rings were pretty easy to slip off, especially when they were well buttered, so I wasn’t as concerned about having stuck pastries. However, both rings and tin produced delicious results. There really wasn’t a big difference in taste wise – even the lopsided, “rustic” kouign amann from the muffin tin were very very tasty. So as long as I wasn’t trying to go up against the professionals looks-wise, my kouign amann were successfully decadent. They were even more decadent after I added a spoonful of Pierre Hermé’s Infiniment Praliné Noisette on top. You probably don’t want to have this kind of breakfast all the time, but when you do, it’s a surely a breakfast to remember.