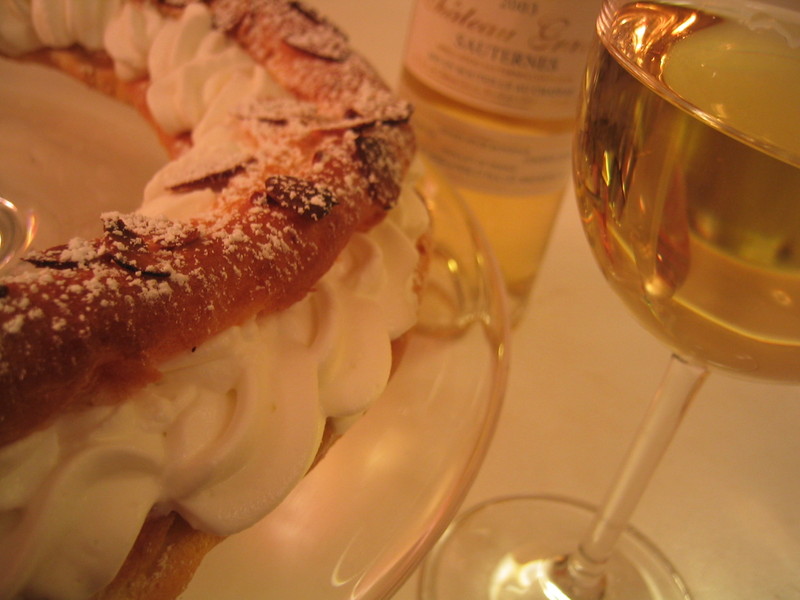 As the theme for this month’s Is My Blog Burning was Vive La France!, I thought it a wonderful opportunity to revisit all the French pastries I made in pastry school.  I decided on one of my favorites, the Paris-Brest.

The Paris-Brest was created by a baker in 1891in honor of the Paris-Brest-Paris bicycle race, which was a precursor to the Tour de France.  The pastry is made of a ring of pâte à choux filled with praline pastry cream and topped with whipped cream, almonds, and powdered sugar – really, a very elaborate version of the cream puff.  The ring shape of course is meant to resemble a bicycle wheel – a delicious one, at that!

The Paris-Brest-Paris (or "PBP") race was started by a Pierre Giffard as a way to promote the newfangled bicycle as an effective and reliable means of long-distance travel.  Originally held every ten years, about the 1950s it started being held every four years; the last one was run in 2003 and the next one is planned for 2007. The route is grueling: 600 km (about 375 miles)from the nation’s capital to the port city of Brest by the Atlantic Ocean and then back, in under 90 hours. The winner of the first race, Charles Terront, accomplished the feat in about 72 hours.

The race is no longer open to professionals and is instead attempted by hard-core amateurs as a randonnée – another of those charming French words with no direct English translation. Roughly, the word means an excursion or ramble – in the cycling world a randonneur has come to mean someone trying to finish a randonnée within a certain amount of time. A randonnée is not a race – it a test of your abilities, and not against others.  Fitting with this philosophy, randonneuring emphasizes self-sufficiency, and riders are expected to bring or procure their own food and supplies along the route.

As a dessert, the Paris-Brest is a fine tribute to this idiosyncratic event.  It is based on the equally unique French creation, pâte à choux.  It’s magic to me how a simple batter of butter, water, flour, and eggs can produce these light, airy shells ready to be filled with any number of luscious fillings. From pâte à choux comes the classic cream puffs, eclairs, profiteroles, beignets, and that other famous French dessert, croquembouche.

The Paris-Brest is surprisingly simple to create. A ring of pâte à choux pastry is baked golden brown and then sliced in half for filling.  A praline of almonds and sugar is ground up and added to vanilla pastry cream to make a sweet, nutty filling that is spooned into the bottom of the ring.  Then whipped cream is piped on top, and the confection crowned with the top half of the ring. A dusting of powdered sugar finishes off the dessert.  It is crispy and creamy, sweet and airy – all the best qualities of pastry.

I paired this dessert with an excellent 2003 Château Gravas Sauternes recommended by the very kind people at K&L Wine Merchants in the Ferry Building.  Rich and full, with honey and fruit overtones, it tastes even sweeter with the Paris-Brest, making for a fine dessert course. 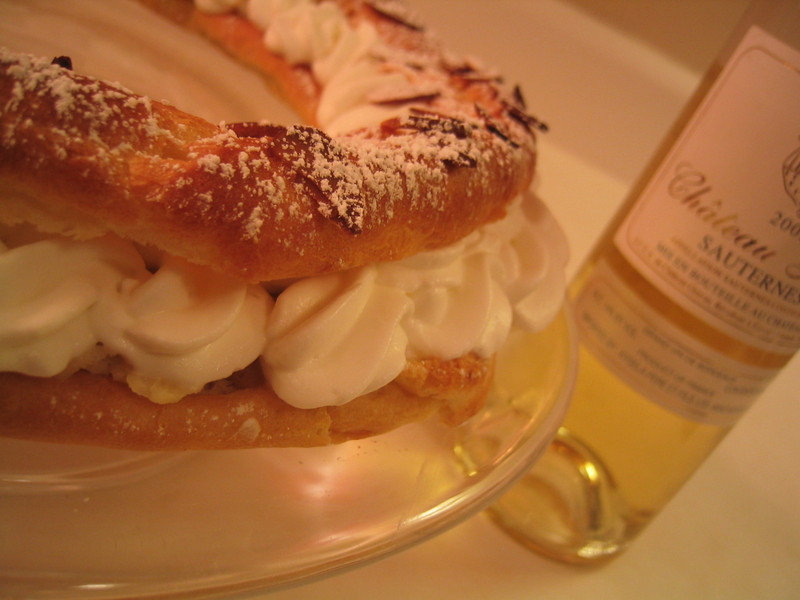 *If you would like to learn more, here is an excellent history of the PBP and randonneuring.