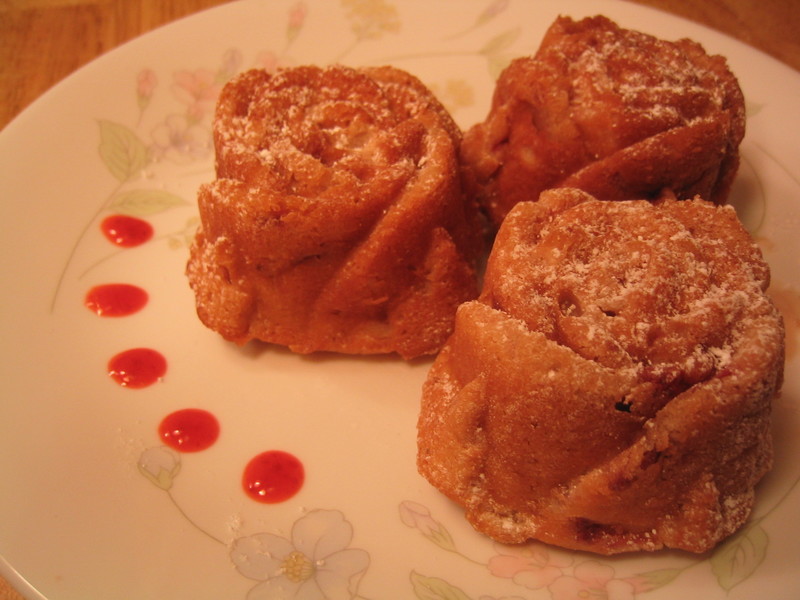 When I saw the theme for this month’s SHF, strawberries immediately popped into my mind.  Whether piled sweetly and innocently next to a bowl of cream or sprawled naughtily besides chocolates and champagne, strawberries almost demand to be eaten sensually.  While there are many recipes involving whole strawberries, I wanted to see if there was one that incorporated strawberries more wholly, especially given that February is not quite strawberry season yet.

When my sweetie gave me this early Valentine’s Day gift it all came together. Williams-Sonoma calls it a "Sweetheart Rose Cakelet Pan" – I can’t decide if the word "cakelet" is completely redundant in light of the perfectly cute "cupcake", or if it will eventually grow on me.  Regardless, twelve little rosebud-shaped cakes…filled with strawberry frosting…sounded like a plan!

Actually, flavoring the cakes strawberry is quite appropriate because strawberries are a member of the rose family.  And roses and strawberries are among the most recognizable of aphrodisiacs.  Some interesting facts I found:

I adapted a recipe found on the card with cakelet pan  – it resulted in a dense, moist cake – like a fluffier version of pound cake.  I used thawed frozen strawberries – the fresh ones at the store not really looking all that fresh – adding in the strawberries gave the batter a wonderful, delicate pink color and made it smell heavenly!  After baking the cakes were of course browned on the outside but still prettily pink inside.

I finished the dessert off with a strawberry-rose coulis, really just a combination of strawberries, sugar, and rose syrup.  Rose syrup is thicker and more intense than rose water, and gave the sauce a tang that went really well with the cake.

Strawberries and roses – just in time for Valentine’s Day!

About 12 strawberries, cut up

Note: You could make this just as easily in a regular muffin pan; the recipe yields enough for a regular 12 cup.  In fact, the next time I do this I might use a more cupcake-y type recipe…

Combine the flour, baking powder, and salt in a bowl. Combine the milk and vanilla in a second bowl.

In the electric mixer, combine the butter and 3/4 cup of the sugar and beat until fluffy, stopping the bowl occasionally to scrape down the sides. Add the egg yolks one at a time.

Reduce the mixer speed to low and add the flour in three additions, alternating with the milk mixture.  Beat each addition just until incorporated and scrape the bowl sides down as necessary. Add in the strawberries and beat until just combined.

If you don’t have a second mixer bowl, scrape the batter out into a bowl and wash and dry the mixer bowl.  Put in the egg whites and beat them in the mixer with the whisk attachment until stiff peaks form; add the remaining 1/4 cup sugar and mix until combined.

Gently fold the egg white mixture into the batter until just combined.  Divide the batter among the pan cups and bake until tops are golden, about 15 to 20 minutes.

Transfer pan to wire rack and let cool for about 10 minutes before inverting cakes out to let cool completely.

About 9 strawberries, cut up

Beat the butter in a mixer bowl with the paddle until it is soft and the consistency of mayonnaise, not melted.  Transfer to another bowl and wash and dry the mixer bowl.

In a saucepan, heat the milk and 1/4 cup sugar until small bubbles appear around the edges.

In the mixer, beat the egg yolks and 1/2 cup sugar together with the whisk until pale and thick.  Reduce speed to low and add the hot milk mixture, then pour the entire mix back into the saucepan and return to stove. Wash and dry the mixer bowl.

Heat the egg mixture until it reads 170 degrees F on the thermometer, then transfer the egg mixture back to the mixture bowl and whisk until cool, about 10 minutes. Beat in the vanilla.  Beat in the butter in four additions. Add the strawberries and mix until combined.

Note: If the buttercream seems to curdle, you can try to fix it by running a kitchen torch around the side while it is mixing to heat up and melt some of the components – let it keep whipping and it will eventually come together.  Or, it has turned into a soup, let it chill in the refrigerator to let it solidify before you re-whip it.  I’ve had buttercream break on me before but it usually can be saved!

Spoon the buttercream into a pastry cream and pipe into the strawberry cakes.  You may need to cut out a "plug" from the cake so you can fill it and then cover it up.

2 Tbsp rose syrup (can be found at Indian groceries)

Put strawberries in food processor and puree into sauce.  Add sugar to taste, and about 2 Tbsp of rose syrup (I didn’t measure, add to your taste).